The first half of 2013 hasn't touted much in the way of exceptional horror. I can't speak for the horror community as a whole, but as it stands, there have really only been two or three titles that have piqued my curiosity. The title that has been sitting at the top of my "Must Sees of 2013" list for quite some time is Jen and Sylvia Soska's American Mary. Boasting a cast of mostly unknowns led by the distinctively lovely Katharine Isabelle of Ginger Snaps fame (I have a major lady crush on her) and a premise that is as far up my alley as any bit of genre fare could be (twisted medical experiments, feminine empowerment, an unpleasant reality suffered by a character that is easy to relate to), I knew right from the get-go that American Mary would be a force to be reckoned with by the end of 2013 when I begin to reflect on the best of the year's genre offerings. I've yet to check out the directorial debut of the Twisted Twins, Dead Hooker in a Trunk, so I didn't have any grounds to compare their second feature on. I will say that everyone who I've talked to who has seen both Death Hooker and American Mary have said that the former absolutely pales in comparison. For a second feature to completely blow its predecessor out of the water is an excellent sign of great things to come, and portrays the evolution of genuine talent.

The Twisted Twins have ceremoniously imprinted their claw marks in the stone of monumental horror cinema with the release of American Mary. These two ladies are clearly an all-about-horror breed. You can tell that they live, breathe and will die by horror. I mean, sure, there is an endless roster of up-and-coming filmmakers out there paying homage to the genre that they are so hopelessly devoted to, by making, at best, mediocre rip-offs of the horror flicks that they grew up on. But the sad truth is that the majority of these filmmakers have nothing truly outstanding, or even so much as fresh, to bring to the chopping block. This is what sets the Soska Sisters apart from their comrades in cinematic carnage. American Mary is a whole-heartedly, brutally honest portrayal of the corruption of the American dream (hence the title), the destitute lifestyle of a once hopeful but now jaded post-secondary student, and the blatantly nefarious chauvinistic segregation that realistically occurs against women in many professions. The film also explores the idea of creating one's identity through extreme body modification (a theme that is more relevant now that it ever has been, and yet surprisingly hasn't really been explored much in horror yet), and discovering just how far a person is willing to go to not only make ends meet but also to stand their ground in dire times.

Mary Mason (Katharine Isabelle) is a medical school student who, like most post-secondary students who don't have the luxury of leeching off of rich parents, is starting to buckle under the stress of financial instability and pressure from one particularly dick-headed professor to "stop fucking up"  and really live up to her potential. She gets good grades and spends most of her free time studying and practicing her blossoming surgical skills by sewing various poultry parts together. After receiving several calls regarding outstanding bills, Mary hits the web in search of a job to replace her position in a restaurant that is being shutdown also due to financial troubles. Her search for employment lands her in a seedy strip joint managed by a sexy dark-haired guy (who actually seems like too much of a secret romantic to be in this particular line of work) named Billy Barker (Antonio Cupo). Billy instantly develops a thing for Mary (which later develops into an infatuation that borders on fear of her), and by a random momentary turn of events, offers her a fleeting opportunity to make $5,000 by simply putting her med school expertise to the test. 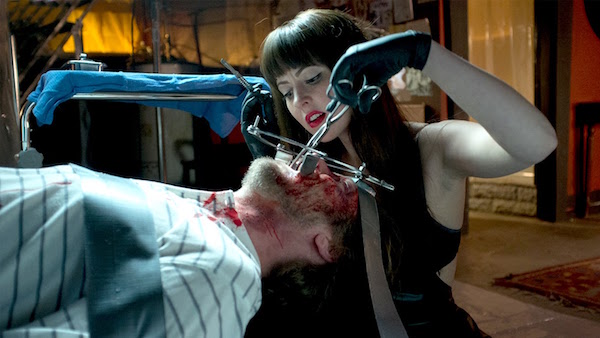 Ok, so it may not be as simple as I've suggested, but the details are left to one's imagination. Mary then meets Beatress Johnson (Tristan Risk)–the product of several Betty Boop-inspired plastic surgery experiments who's looking to find someone to help her friend Ruby Realgirl (Paula Lindberg) complete her Barbie Doll-inspired look–in the most unorthodox way one could possibly imagine. Beatress offers Mary a hefty load of cash to help Ruby, and although Mary feels pretty uneasy about the whole thing, she does it for the money. This particular "job" triggers a change in Mary, one that begins with good intentions, but sends our ravishing leading lady spiraling out of control and doing things she likely never imagined herself doing... all while clad in a cute mini-dresses, high heels and a flattering black PVC apron (the costume design by Jayne Mabbott is absolutely stunning). I'll add that the Soska Sisters shed a fair amount of light on the body modification community, portraying Mary's patients as real people, with thought-provoking motives for their desires to be heavily modified.  Heavily modified people are often viewed as "freaks" by the general populace, and most people can't even begin to fathom why people would want to alter their bodies to such an extreme, unnatural degree and no, I'm not talking about tattoos and piercings. But for anyone who has ever wondered why people go to such great lengths to alter themselves, you'll find some legit answers here.

The climax inspires one to think about the prices these people are often forced to pay in order to have their physical appearance reflect who they are on the inside. Not only is there the possibility of infection, illness and permanent damage to body tissue, but there's also the stigma of being pigeonholed or outcast from society and family, as well as the reformed perspectives and opinions of friends and loved ones. The Twins' increasing understanding of the film medium and the communication of not just a story but the accompanying emotions, mentality and ambience, is in full bloom here. Jen and Sylvia Soska have a firm understanding of what it takes for this type of horror film to really be effective. You think of the field of medical sciences and the field of body modification and just how excruciatingly painful and torturous either of these things could be, so what's really surprisingly is the fact that there is so much more to American Mary than copious amounts of bloodshed. The Soska Sisters could have just as easily used the film as a vehicle for depicting the sickest shit possible onscreen, but the gore is actually implied more than it is actually shown.

Don't get me wrong, there is an abundance of "Oh my God, did she just do that to that guy?!" moments in American Mary, but those moments are balanced precisely with what is left to the imagination, the procedures that Mary's patients (or victims) are enduring off-screen. What's truly horrifying is how much our leading lady, Mary Mason (Katharine Isabelle), is forced to endure. From financial woes, to vicious tongue lashings and blows to the ego from med school professors, to a very crude and humiliating incident involving said professor. It's enough to make a person snap and Mary is able to do just that in the most elegant and sophisticated manner possible. There are so many outstanding, noteworthy elements of American Mary that could easily justify a lengthier review. The special FX, the brilliantly complementing score, the cinematography, the exquisite lighting... I absolutely loved everything about this movie. But I think what I love most is how great of an achievement American Mary is for the Soska Sisters, and the Canadian horror community in general. And also the fact that, as a female horror film fan, I now have a new admirably bad ass female horror icon to write about... and maybe even dress up as for Halloween.
Posted by Greg Baty at 1:36 PM