Get a little sleazy with Miss Wyckoff

Have you ever seen a sleazy exploitation film that was directed by a multiple Emmy Award winner? Written by an Academy Award nominee? With a score by an Oscar-winning composer? Featuring a supporting case like Donald Pleasance, Robert Vaughn and Doris Roberts? Until now, I hadn't and chances are you haven't either. I'm sure there are other examples of highbrow sleaze, but they are few and far between. Marvin J. Chomsky's ("Roots") Good Luck, Miss Wyckoff is a marvel of smut because it is wrapped in a legitimate film package and when the offensive and salacious scenes begin, you are left with your mouth agape.

The film is set in 1954 small-town Kansas, during the beginning of racial integration and deep into the "Red Scare" or anti-Communist movement. This is a place where open-minded, yet virginal high school teacher Miss Wyckoff (Heywood) definitely doesn't fit in, except with her small group of female colleagues. Soon we see that she is acting oddly; overly emotional, sleepless, violent outbursts (all of which are portrayed in nightmarish quality). Miss Wyckoff goes to her doctor (Vaughn) who refers her to Dr. Steiner, a psychiatrist (Pleasance) who both agree that she is going through early menopause and she should seek sexual relations to relieve her symptoms (?!). Of course she is taken aback by this aggressive form of therapy.

It isn't until a very forward, married bus driver propositions her and she turns him down, that she gives it a second thought and wants to take him up on his offer but by then it's too late–he's gone and has left his wife as well. Shaken by this, she pushes through until one day she is seduced by the young, black janitor Rafe who she also turns down. The next day, she isn't so lucky and Rafe (a very young John Lafayette) forces himself on her and rapes her. From there he begins to terrorize her, degrading her daily until she begins to enjoy it on some level. Unfortunately, word of their torrid relationship gets out and that's when things actually get worse. Jarring sexuality and violence isn't the only thing the movie has going for it. There are also the white-hot political, social and racial issues that are met head-on with all of the subtlety of a steamroller. Let's just say the "N word" is thrown around generously and "Rafe" is a very angry black man. 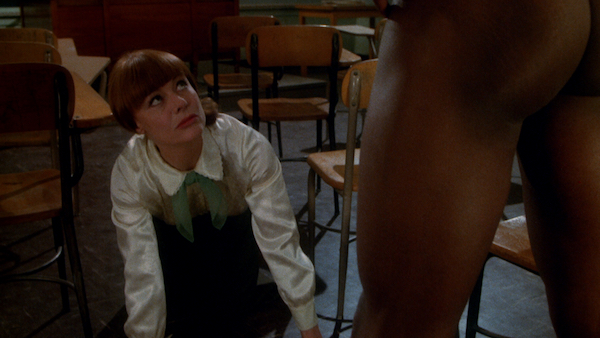 Until word of this release came out, I had never heard of Good Luck, Miss Wyckoff, even in the circles I run in with persons way more knowledgeable than I. That seems pretty peculiar since this is such a wonderful slice of sleaze pie. It's amazing that they got very legit actors to play even bit roles in such a film. Maybe it's because of the top-notch production values but more likely it's the tame, edited cut released in the U.S. entitled The Sin. This wonderfully unedited version (106 minutes) is available for the first time on home video through the good people at Vinegar Syndrome and the 80 minute cut of The Sin is also included as an extra (DVD only). Basically the longer version includes the full rape, a degradation scene and the entire part of her being raped over a hot furnace and them being caught, which is integral to the ending.

Aside from the second feature, there is a couple of trailers and a short (6:30 min) video of Shirley Knight talking about author William Inge. I hoped there was more about the actual movie but was a little disappointed. Obviously I wasn't disappointed in the movie itself and the high-definition transfer is also damn good, aside from negligible film debris and occasional slight color flicker. The mono soundtrack has minimal hissing toward the beginning of the film but seemed to dissipate as it went on. This might be the sleeper release of the year in the exploitation arena which is littered with re-issues of big name titles, neo-grindhouse flicks and bottom-of-the-barrel fodder. Don't let the title and big names fool you, this one is as nasty and shocking as they come without all of the low-budget detritus. Add this to your collection if only to fool people into thinking you are classy and shit.
Posted by Greg Baty at 6:06 PM