ADAM CHAPLIN is a violent and gory avenger

I was a relative newb to the horror genre when I first saw the likes of the early films of Peter Jackson and the Evil Dead films. Those movies laid the bloody groundwork for me to later take in more extreme gorefests like the German insanity of Der Todesengel (aka Angel of Death: Fuck or Die) and Takashi Miike's gonzo Japanese yakuza epic Ichi the Killer. Even knowing that there were movies out there that rival and maybe even surpass these classics in the guts-n-grue department, even that knowledge could not have readied me for what was to come in the form of a Japanese manga-influenced, Italian action-horror hybrid from one-time writer/director/actor Emanuele De Santi; that movie is Adam Chaplin.

Adam is a man bent on revenge after his beautiful wife is brutally torched alive by Denny, deformed crime boss and his henchmen. Denny's toadies also happen to be his sons, local police officers, which means Adam must not only fight the seedy underbelly but also the seedier law enforcement. How can one man take on an entire army of murderers, you ask? Well, he makes a deal with a demon who gives him incredible strength and supernatural telekinetic powers. Adam must kill everyone associated with his wife's murder to hold up his end of the deal with the slimy little hellspawn at which point he will once again be reunited with his love. So he uses mostly his bare hands and new power to slaughter his way to Denny.

See how this could get messy? Adam Chapin: Violent Avenger is a highly stylized, almost art-house style action flick with elements of horror and certainly influenced by kung-fu flicks and manga. The intense look of Adam Chaplin is from the entire movie being run through a blue filter and the contrasts being amped up. This effect makes the copious amounts of blood and gore look horrifically real. The whole movie is very dark and this is not to hide anything, instead it is used to highlight the important stuff and certain aspects of character's features, etc. The overall look and feel of the movie reminded me of a terribly gruesome, splatter-horror graphic novel. Like J. Michael Muro's classic Street Trash, most of the characters have some sort of deformity. Sometimes just enough to make them look a little... off. 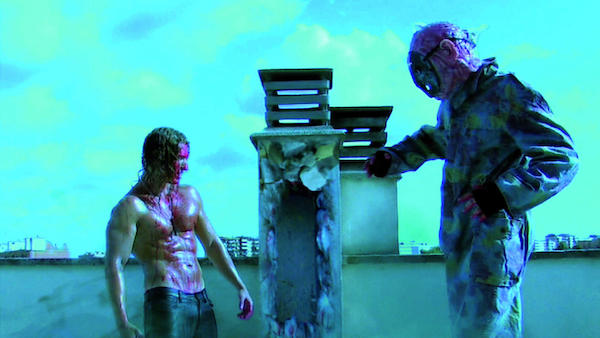 Writer/director Emanuele De Santi also plays the titular character and this dude is built like a chiseled Mack truck. His hulking frame and long hair are usually covered in dark red torrents of blood, with his eyes rolled back in his head ushering in the power of the demon. He's a man of few words, but those words will send a chill up your spine. The imp who gives him his power appears from an upside-down cross that was seared into Adam's back, he croaks in his ear what to do and who to eviscerate. The character is like none I have seen before. The closest I can come would be the mentally deficient killing machine "Ichi" from Miike's over-the-top Ichi the Killer but even he would shit his bloomers at the sight of Adam. Adam Chaplin is a nightmarish and surreal high-octane splatterfest that should not be missed by any self-respecting horror or gore fan.

Finally, after two years of waiting, Autonomy Pictures has picked up Adam to bring him to the U.S. and I could not be happier, especially since this is also the uncut version! Oddly, there is also a version included on this disk with French subtitles. The disk is pretty short on extras; even though there are a few, they are very short. Most of them show the technology and techniques used in the special effects of the film and the last one is nothing but Emanuele De Santi working out and flexing. All together I think that adds up to less that 10 minutes of supplemental material but interesting nonetheless. But I digress, this DVD should be in your collection no matter what else is on the disk. This has literally moved into my Top 5 Favorite Horror Movies and Top 10 Movies of All-Time. Yes, it's that fucking badass.
Posted by Greg Baty at 2:32 PM