Jungle Blue: Tarzan and the Man in an Ape Suit

What do you get when mix "junglesploitation" (ala the Italian cannibal cycle, etc.) and lots of hardcore sex? Well, veteran adult filmmaker Carlos Tobalina's "Tarzan" rip-off Jungle Blue of course! The plot revolves around a small group of Americans heading off into the Amazonian jungle to take advantage of the local primitive tribes (sound familiar?). They trick local "ape-man" Evor into leading them to the tribe under the pretense that they are scientists. Once there, they plan to kill everyone including their clueless friend Jane (natch!) and steal the tribe's precious jewels. Their nefarious plan succeeds until they find out that Evor isn't so easy to kill, even after they shoot him like 7 times! A chase ensues and in the end, someone gets clipped with blowguns!

Jungle Blue aka Rey Del Amazonas was never released on VHS here in the U.S. and probably with good reason; it's a pretty ramshackle production. That doesn't mean that it's not worth seeing, because it damn well is. I had a shit-ton of fun watching as Chico (Evor's gorilla friend) gets a blow-job in the opening scene and then randomly gets another one later in the movie, but this time with a little "monkey business" to boot. (I mean he banged the chick. I just really wanted to shoehorn the phrase "monkey business" into this review.) In fact, nearly all of the hardcore sex which stemmed from an orgy involving Silvia, one of the girls in the group of the main plot was intermittently inserted throughout the central plot seemingly to pad the run time. 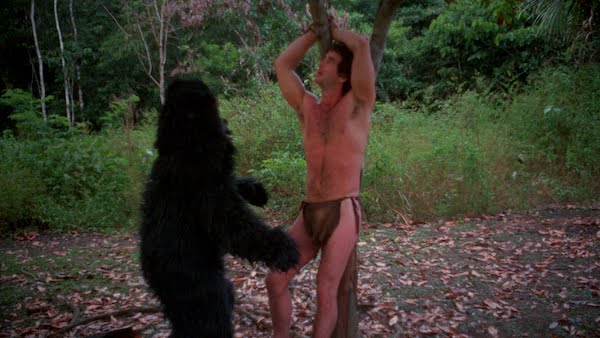 The orgy (which also involved some Amazonian "natives") and the main plot are loosely connected because Silvia takes some iowaska, a mind-altering substance, before the sexy time and the "adventure" was a drug-induced dream she was having during the group sex. "Evor" is played by Bill Cable (listed as "Bigg John") who was in another few skin flicks but is best known for being one of Sharon Stone's victims in Basic Instinct. Mr. Cable didn't get in on the hardcore sex action but had a dick stand-in whose gargantuan member looked like John "Johnny Wadd" Holmes. That's right, I can pick his cock out of a line-up. The jungle shots were surprisingly gorgeous but the sex intercut with an erect monkey lipstick penis and crocodiles tearing at their prey was more than a little weird.

Once again, Vinegar Syndrome has saved another adult movie curio from obscurity (as film preservationists are wont to do). The barebones DVD is void of extras, save a few trailers, but looks great. The team really took their time to clean up what damage and debris were probably found on the original camera negative. The picture fluctuates in sharpness in some places but that is the shortcoming of the filmmaker, not the release. The sound does waver a bit in a couple of places but in all, it does the job. Jungle Blue is a wild and fun ride and fans of obscure, inept weirdness will definitely get a kick out of it.
Posted by Greg Baty at 6:20 PM