Hammer Films was founded in 1934 but it wasn't until 1955, with their release of The Quatermass Xperiment, that they got into the horror genre. With a string of very successful classic monster movies like Dracula, The Revenge of Frankenstein and The Abominable Snowman their brand of gothic creature features would solidify them as the "Hammer House of Horror". In the early 1970s Hammer had to change their formula to become more graphic, both violently and sexually, due to competition from the U.S. and the rest of Europe. Enter the luscious Ingrid Pitt who would play a sultry vampress in The Vampire Lovers in 1970 and one year later in Countess Dracula. The Vampire Lovers recently got the Blu-ray treatment from Scream Factory, now it's the Countess's turn but from Synapse Films.

Following the death of her husband, the Countess Elizabeth brings his loved ones to the castle for the reading of the will. After doling out the estate, the Countess goes up for a bath and her servant girl takes the brunt of her anger when it's too hot. She accidentally wipes the girl's blood on her face and when she looks in the mirror, she realizes that her skin turned youthful where the blood was. Being an egotistical woman, she enlists the help of her lover Captain Dobi, kills the girl and washes in her blood. They then have her visiting daughter kidnapped and the Countess assumes her identity to win the affections of the young Lieutenant Imre. This doesn't sit well with the older Dobi, who feels he can't compete with the younger man, nor the castle historian Fabio, who doesn't know the details but feels like something is amiss. What will finally stop Countess Elizabeth's lust for virgin blood? 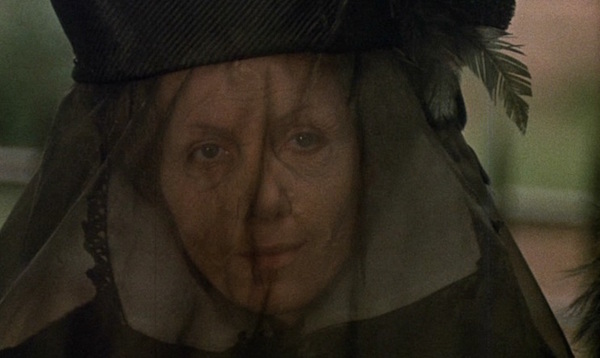 For my money, the sweet spot for Hammer Films was indeed the late sixties into the seventies. Their production values were still high, the storytelling was solid and the gothic atmosphere was still there but when you added in more violence, sexuality and nudity, that was the winning combination. It just so happens that my two favorite Hammer movies are the ones that feature the incredibly voluptuous, sultry and engaging Ingrid Pitt. It certainly didn't hurt that she actually has acting chops, unlike some other gorgeous Hammer babes. Pitt runs the show here, stealing every scene she is in as the aging Countess or the vibrant, younger "daughter". Nigel Green as the jealous Captain Dobi, torn between his love of Elizabeth and his jealousy, also does a great job playing both sides of the fence.

Countess Dracula is a dramatic gothic horror movie filled full of lust, betrayal and bloodletting, and in a couple of glorious instances, Ingrid's milky mammaries. Even though she spends a lot of her time behind the "old lady" make-up, there are a couple of scenes where she shows them off nicely. She doesn't play the sexpot vampire that she does in The Vampire Lovers, but this is a more meaty role in which she can show off her real talent: acting. The ten-minute featurette on this Blu-ray (as well as the identical DVD) "Immortal Countess: The Cinematic Life of Ingrid Pitt" tells the interesting story of her much too brief foray into acting. The commentary from the MGM "Midnite Movies" double-feature (with Vampire Lovers) is brought over but Synapse added a nice audio interview with Pitt from the archives. The new disk looks and sounds great, a definite upgrade from the old DVD on both counts.
Posted by Greg Baty at 6:03 PM