(NOTE: The internet seems to think that Death Spa is from 1989 even though the Blu-ray cover says 1987. For internet search purposes, we will go with 1989 for the title of this article.)

Are you ready for a deep, poetic, atmospheric horror movie that will give you nightmares for days? Well sorry, all I have is Death Spa, a 1980s time capsule of epic proportions. Director Michael Fischa is known for such classics as the PG-13 comedy My Mom's a Werewolf, neo-blaxploitation flick Crackhouse (starring Richard Roundtree and Jim Brown) and the not-at-all-sterotypically-named Rice Girl. What I'm saying is, Fischa is known for making some pretty "out there" stuff and the incredibly cheesy and satisfyingly bad Death Spa is no exception. A health spa (which had a heyday in the '80s) that's possessed by an angry ex-wife's spirit? There is no way this can't be fun.

Michael has opened up a fully computerized health spa run by a system set up by David, the twin brother of his deceased wife Catherine. Everything is hunky-dory until one night after-hours when Michael's new girlfriend Laura is trapped in the sauna with deadly chlorine coming through the mist and she has to bust the glass to get out, losing her sight in the meantime. After that, things just start to get weirder; a shower full of naked ladies get blasted by flying tiles, a weight machine nearly pulls a dude in half and acid sprays from the sprinkler system. I think someone has a computer virus! So, Michael goes to a parapsychologist for a little help and is told that it's his dead wife who is causing the havoc. But does she have help from the living? 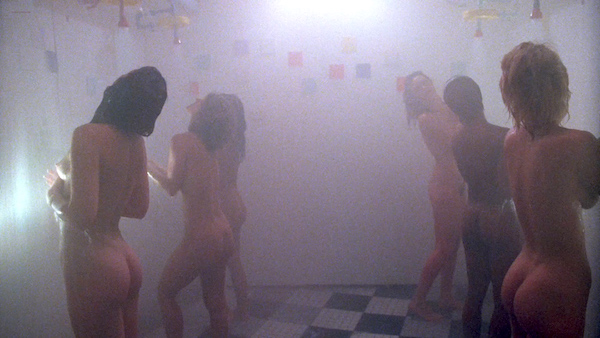 Michael Fischa's Death Spa is a garish '80s horror homage to Flashdance (lots of dancing in tights!) and is nothing short of wonderful. The fashion of the day; neon-colored leotards, leggings, headbands and giant Aqua Net hair are all on display here along with lots of gratuitous shots of pre-silicone, all-natural boobs! The gore is of the over-the-top fun kind with lots of blood spraying, facial grotesqueries and oozing, bubbly skin. Yuck! The cast is loaded with familiar faces and some new ones I need to seek out in other movies. The one that jumped out at me right away being a child of the '80s was Merritt Butrick from the TV show Square Pegs. Butrick plays "David", a computer hacker who seems to have a few incestual issues he needs to work out (pun intended). But the one that made me pause (literally) was a bit part by the Fresh Prince of Bel Air's Karyn Parsons as a flirtatious health spa groupie. So hot!

To my knowledge, Death Spa has never been released in the U.S. on DVD by a legit company. I do know that it had a great run on VHS because I remember pining to rent it at my local video store when I was a kid. That tape was distributed by MPI Home Video back in the day and now MPI has teamed with the legendary Gorgon Video to release this gem in a Blu-ray/DVD combo pack. Gorgon has pretty much been silent the past few decades save a release of The Original Faces of Death 30th Anniversary Edition on Blu-ray and DVD in '08. Now they are back with a vengeance with this gorgeous high-definition release of a movie that some would scoff at even in standard definition. But Gorgon's transfer is full of beautiful film grain, giving the picture surprising detail and clarity even in the facial close-ups. The loud neon colors really pop off of the screen and the good black tones give it nice depth. The rocking '80s soundtrack gives the newly mixed 2.0 Dolby stereo a good workout (yes, another pun) but it sounds great. The making of feature is an hour-long worth of interviews with cast and crew. How they got that much material out of this movie and still made it interesting, I don't know.

This is an all-around stellar comeback release for Gorgon Video and I look forward to what they do next.
Posted by Greg Baty at 12:35 PM