NEKRomantik, NEKRomantik, NEKRomantik. The name is synonymous with "shock" and heralded as the epitome of sleaze. Jörg Buttgereit's 1987 West German low-budget 8mm film was banned in several countries for "graphic depictions of necrophilia" and has since become a legend of the horror and exploitation underground. When lazy websites do one of those fucking lists with a headline like "Top 20 Most Disturbing Movies Ever!" just to get clicks, NEKRomantik is inevitably on that list. Nearly every time someone is asked their top sickest movies of all-time, NEKRomantik is on their tongue. I dare say that a lot of the people who put it on it on their list have never actually watched the movie. More on that later...

Rob works for the JSA or Joe's Street-cleaning Agency, a company that cleans up dead bodies of all kinds; murders, car accidents, whatever. His co-workers know that he is a little strange and undependable but what they don't know is that he takes bits and pieces of some of the dead bodies home for his and his girlfriend Betty's macabre, mad scientist-like collection of anatomy. One day Rob sneaks an entire corpse (we'll call him "Bernie") home and he and Betty have a threesome with Bernie after screwing a pipe where his decomposed dick should be. Rob gets fired from his job and comes home only to have a big fight with Betty, after which she leaves him and takes Bernie with her.

This sends Rob into a tailspin of utter despair and anger. He takes her cat and stuffs it in a sack and viciously smashes it against the wall before gutting and bathing in the critter's blood and entrails. His dreams are of a half-decayed version of himself tearing out of a plastic bag and playing catch with a woman dressed in white using a human head and guts while running in a large open field in slow-motion. Ron can't even take in a sleazy slasher movie at the local theater without being distracted and walking out. He thinks that maybe picking up a street-walker and fucking her in a graveyard on a tombstone might snap him out of it, but he is impotent unless he kills and fucks her dead body. What can Rob do to end his misery and satiate his lust of the dead? 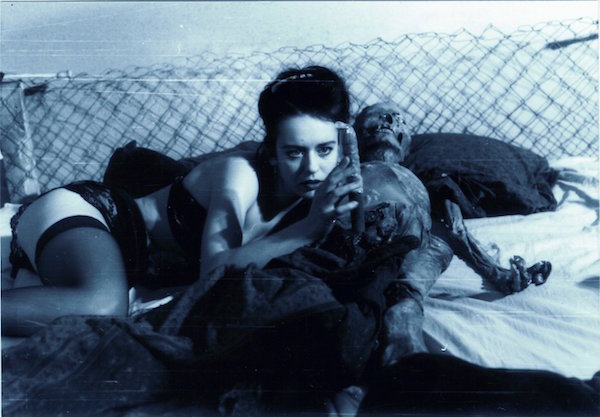 NEKRomantik covers a few genres; shock, gore, art-house and erotica, all with a sense of style and talent that rarely shows through in low-budget, underground cinema, especially from a first time feature film director. Buttgereit had a multitude of short films (like Hot Love, which is a special feature on this disk) under his belt when he and writing collaborator Franz Rodenkirchen decided on this idea of combining two of the most primal forces of human nature; lust and death. The two were living in a country where these kinds of movies were being banned and heavily censored but that didn't stop them from seeing their vision come to fruition. NEKRomantik's reputation of being "shocking" and "disturbing" is completely warranted but it was made with poetic social and spiritual commentary that sets it apart from most of its ilk.

NEKRomantik was released by Barrel Entertainment in 2000 in a small run and a decade later was going for a ridiculous amount of money on the secondary market. That release looked really decent considering the rough, 8mm material. A big surprise to me, Cult Epics has just released an HD version of the film taken from the original Super 8 negative and approved by Buttgereit himself. This version is definitely a step-up in quality and looks as good as the source material will allow, which means the contrast and sharpness are still dubious. Also on the Blu-ray is a new "Grindhouse" version takenÂ from one of the only theatrical 35mm prints still in existence. This one looks noticeably dirtier, darker and just rougher in general. Fortunately, this is not a bad thing for NEKRomatik and is probably the way a lot of fans prefer this masterpiece of underground cinema.
Posted by Greg Baty at 6:09 PM