Jörg Buttgereit's underground art house shocker NEKRomantik from 1987 didn't quite quell the German director's need to express his vision of necrophilia. All of the controversy surrounding the original would be amped up when he released its sequel in 1991 in Munich to an unappreciative German government who would unjustly confiscate and ban it for years for "glorifying violence". NEKRomantik 2: The Return of the Loving Dead was never given a proper trial or hearing and was simply the victim of an overzealous censoring authority, something that had not been done since the Nazi regimes of the 1930s and '40s. The film was finally deemed "art" a couple of years later and given legitimacy.

Beginning with a flashback to the end of the original film, we then meet a well-dressed woman named Monika as she finds Rob's grave after reading about him in the newspapers. She proceeds to dig him up and take him home for some sexy time. She is unable to achieve her own "little death" while fucking the corpse and is revolted by what she has done and vomits. Mark is a dude who makes a living over-dubbing porn and when he is stood up by his friend, he meets Monika and gives her his extra ticket, and the two hit it off right away. After a few successful dates, she goes home to "break up" with Rob's corpse; dismembering, disemboweling, castrating and ultimately reburying him. Now she must find a way to combine her love of the dead and her "real" relationship with a living, breathing human being. 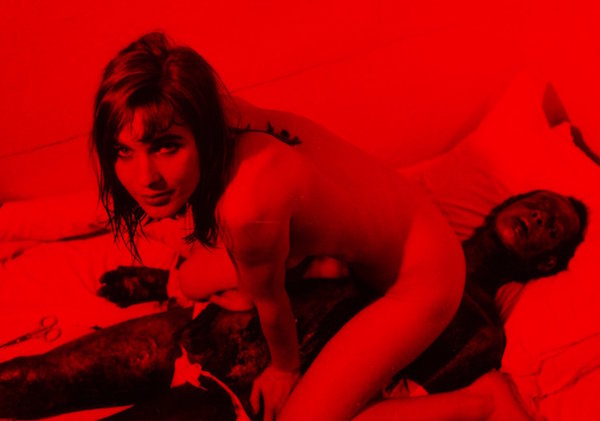 NEKRomantik 2 is ultimately a love story: a VERY fucked up love story, but a love story nonetheless. Buttgereit somehow makes the obviously crude and shocking themes of necrophilia and gory splatter into a charming story of a woman who has an extremely warped, but no less true, need for love, passion and affection. Like the original, the sequel uses interesting and symbolic imagery to create a mood. Buttgereit's uncompromising vision takes the second film to new heights of depravity and the technical aspects of part 2 have improved greatly on its predecessor. There are a few slow moments that reminded me very much of a typical romantic movie, like Monika watching the waves roll in at the beach, that bring the pacing to a halt. A deplorable and overly drawn out scene of seal animal cruelty also mars an otherwise classic sequel.

Cult Epics, the people who brought you NEKRomatik in high-definition, are back with NEKRomantik 2 and it looks even better than the first! Where the first film was sourced from an 8mm negative, this one was originally shot on 16mm, giving us a much cleaner, crisper new Blu-ray transfer taken from that negative and approved by Buttgereit himself. The new release brings over some of the supplemental material from the Barrel Entertainment release like the "Making of" but also has some new surprises like some music videos, a live concert of the soundtrack and, in this limited to 500 edition, a couple of awesome collectable photo cards that will not be available in the regular edition. Like his often misunderstood films, Buttgereit comes off as extremely likable in the new introduction of NEKRomantik 2 and the audio commentary.
Posted by Greg Baty at 6:24 PM