In between his two most famous movies, NEKRomantik and NEKRomantik 2: Return of the Loving Dead, German underground filmmaker Jörg Buttgereit made one of the most depressing and dark art house movies I have ever seen; Der Todesking aka The Death King. The film is a loosely connected anthology of sorts held together only by a chain letter sent to each person, presented on each day of the week and all of the vignettes contain the same subject matter; death and suicide. Each of the chapters are broken up by the extremely graphic eventual decomposition of a human body.

Monday: A man calls his employer to resign while packaging up letters (the chain letter) to send out. He poisons himself and dies in the bathtub. Tuesday: A man rents a movie about Nazis torturing a prisoner (the cover looks like an Ilsa flick) when his wife comes home and he shoots her. This very meta episode ends with a TV screen showing the murder in a room with a hanging man. Wednesday: A stranger on a park bench tells a woman about his terrible love life which led to him killing his wife. The woman pulls a gun and he takes it from her and shoots himself.

Thursday: In possibly the most esoteric of all, this day shows us beautiful shots of a huge bridge while flashing names, ages and occupations of people who have committed suicide on the bridge. Friday: A woman watches a young couple from her window when she receives a letter (THE letter), dismissing it, she falls asleep. When she awakens, she finds that the couple are dead. It is possible they got the letter too. Saturday: A young woman reads about "post-modernism", then straps on a camera and heads out to shoot a bunch of random people before being killed herself. Sunday: An intensely distraught man lays in his bed, becoming more agitated until he violently begins smashing his head into the wall, eventually dying from the brutal head trauma. 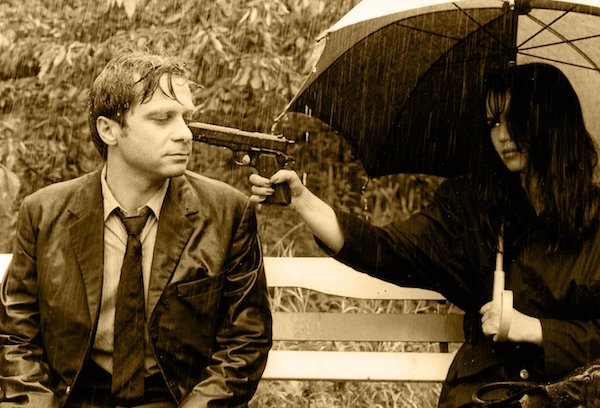 I know this seems like I just gave away the whole movie, but trust me when I say that what happens isn't necessarily the point Buttgereit was trying to accomplish. Each installment is set up by what, at first, seems like mundane events but the atmosphere set forth by Buttgereit is something that you have to experience yourself. You will feel the hopelessness, anguish, despondency, sorrow and finally death of these people who just the day before were leading a life much like your own. Unlike the NEKRomantik movies, Der Todesking isn't overtly gory overall but the subject matter, atmosphere and underground art house aesthetics take center stage to unsettle you.

Buttgereit's other movies including both NEKRomantiks and Schramm have been released in the U.S. before by the long gone distribution company Barrel Entertainment. Der Todesking on the other hand has never been available in the States except on Film Threat VHS in the early '90s. You could only get it on German DVD from Media Target Distribution, until now. Cult Epics, who gave us both NEKRomantik films on remastered Blu-ray and DVD, have now given us the third and final film in the "Corpse Fucking Art" trilogy. The new director-approved HD transfer takes what the original 16mm negative gives and it looks impressive considering everything. And finally we get to see the fantastic documentary "Corpse Fucking Art", also remastered, as an extra on a disk that's loaded with them.

This trilogy of infamous underground cinema from Jörg Buttgereit and Cult Epics should not be missed but any self-respecting horror movie fan or collector alike.
Posted by Greg Baty at 9:32 AM