I Call It Sleeping Beauty but Some Call It Loving

Stop me if you've heard this one before: A woman has been asleep for eight years as part of a carnival attraction where people can buy kisses from her for a buck. Enter a wealthy jazz musician who decides to purchase the entire attraction for a sizable amount of money, take the sleeping girl to his home that he shares with his two other girlfriends, and wait for her to wake up. Once she does, he tries to introduce her to his world of free love and debauchery, and their realities are shattered as a result. It's a story we've seen told dozens of times in film history. I'm being facetious, of course. But James B. Harris finds a fresh approach to the proceedings that is not only refreshing, but ultimately very rewarding. This countercultural freak out take on "Sleeping Beauty" is so unlike any other film I've seen before, that even if the entire film was awful, I would applaud it for its originality alone.

Zalman King (Blue Sunshine) is actually quite good in this film as the lonely jazz musician with too much money at his disposal and an inability to find any real pleasure with anything in life. Tisa Farrow (Zombie) is certainly no slouch either, playing the role of the "sleeping beauty" with a real sense of naivete and wonder. Her character is not used to this type of lifestyle, and is ultimately quite drawn to it. I think the best performance comes from Richard Pryor, though. In one of his earliest roles, as the musician's best friend, Pryor is positively heartbreaking as a man who loves music, but his own demons and addictions are constantly there to haunt him. 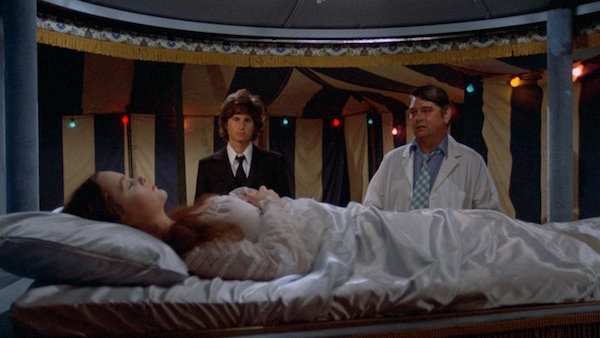 Some Call It Loving was a film that was torn apart by critics in its initial run. A lot of them found it dull and pretentious. I didn't get that feeling at all. This is a film that is hauntingly atmospheric. It's an absolutely mad piece of art house cinema. It's not as blatantly surreal as the works of directors like Lynch, Fellini, or Bunuel, but it certainly exists on its own unusual wavelength as a truly singular work of art. There's nothing really to compare it to, because there's simply nothing else out there like it. I'm pretty sure I loved it, but I just can't be positive. It's a film I won't soon forget, and if nothing else, I simply have to applaud the audacity. I do think Some Call It Loving was ultimately a fairly big influence on King's directorial work (which I am a pretty big fan of.) The moody, sensual atmospheric feel of his masterpieces Two Moon Junction, Women of the Night, and Wild Orchid almost feel like they could have been from director James B. Harris. Harris, unfortunately, never really did anything this interesting again.

This release marks the maiden voyage of Etiquette Pictures, the sister company of Vinegar Syndrome that hopes to specialize in more unusual and arthouse fare. I absolutely love Vinegar Syndrome.  Besides Code Red, I can't think of another boutique label that specializes more in the sort of cult cinema that is near and dear to my heart. As young as they are as a company, I can only imagine the impact they are ultimately going to have in the world of exploitation and cult cinema. Like the rest of Vinegar Syndrome's Blu-rays, the transfer is nothing short of a miracle. The colors are vibrant, the atmospheric lighting of the piece is accentuated, and it's ultimately the type of transfer all labels should strive for. This is absolutely the best it's ever going to look, and with as visual a film as it is, that's incredibly important. A movie this beautiful deserves to be celebrated, and luckily we have companies like Vinegar Syndrome and Etiquette Pictures to make sure these obscure films are never forgotten.

At the end of the day, if you have any real appreciation for arthouse cinema or classic '70s independent cinema, you owe it to yourself to pick up this release.
Posted by Greg Baty at 7:05 PM