"The Avon films epitomized NYC in the '80s as it was a dangerous area made even more dangerous by the emergence of crack and its users", continued 42nd Street Pete. Apropos of that, Phil Prince was a known druggy and also made the most extreme films in the Avon canon. During a three-year run between 1980-1983, he would mix in some dirty short films to go along with his now legendary features like The Taming of Rebecca, The Story of Prunella and Dr. Bizarro. His first two shorts, Savage Sadists and Den of Dominance, were filmed back-to-back in 1980 using the same cast and set for the most part. The last one he ever shot was Daughters of Disciple in 1983 and was by far the nastiest of the three. These 30-or-so minute short films were filthy, ugly movies featuring filthy, ugly sex. No one looked like they were having fun and most of the time dicks were flaccid and being worked like taffy or stuffed into holes.

Savage Sadists starts with a woman answering her door and being attacked by two men who start forcing themselves on her while her hubby is at work getting his dick wet with his curvy assistant. The wife escapes after some not-so-rapey rape and heads down to tell her husband who she catches in the act of assistant-boinking. The thugs follow her as it turns out that hubby owes them money, and after he hides under the desk the two sexed up criminals decide to make all of the ladies (wife, assistant and secretary) perform more of the gross not-sex on them until things flip around and they are the ones on the other end of the gun. 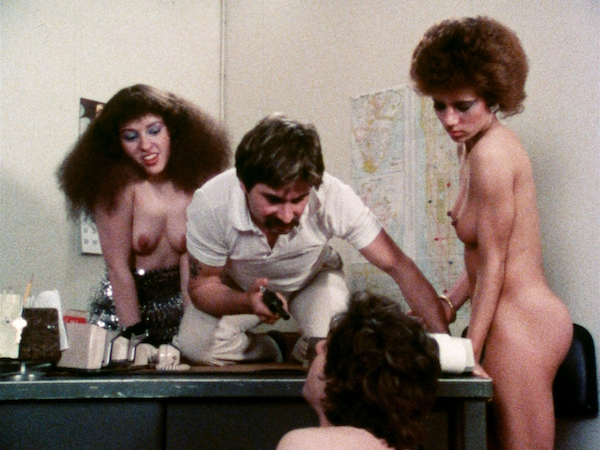 Next up is Den of Dominance where a dude walks into a bar where beer and liquor aren't the only thing on the menu. You can have your pick of the bar hookers and throw down right there with the barkeeper watching the entire sticky thing. Not only that, but they also offer a back room called "The Bizarre Room" in which you can pay extra and watch a dude whip and sexually dominate a subservient woman, while stroking your partner under the table. Of course when the show is over, don't forget the big orgy afterwards! At the end of the night, you pay your bill with a smile and a random fart noise... you heard that right. A random fart noise.

[Special thanks to 42nd Street Pete for his insight and being a fountain of knowledge. Please check out his great magazine GRINDHOUSE PURGATORY here and his exploitation film-style novel GUNFIGHTERS OF THE DRUNKEN MASTER here!]
Posted by Greg Baty at 4:53 PM