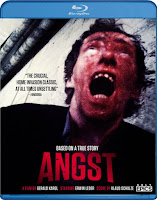 John McNaughton's Henry: Portait of a Serial Killer is a grim American serial killer movie loosely based on real-life serial killers Henry Lee Lucas and Ottis Toole from 1986. To this day it is still recognized as one of the most realistic portrayals of madness and murder ever put on film. Three years before, one-time writer/director Gerald Kargl—along with writing partner and the movie's stellar cinematographer Zbigniew Rybczynski—made a European version of the same idea centered around Austrian psychopath Werner Kniesek entitled Angst which translates into "fear" in German. It was also called Schizophrenia in other parts of the world, which is also a fitting title. The two films are beautifully dark reflections of the same cracked mirror.

The story follows a man (who is not given a name, in fact no one in the film has one) who is being released from prison after being incarcerated for murder and he narrates his thoughts in real-time as we follow him in "a day in the life". If you watch the movie's prologue (which is an option on the Blu-ray menu page), you get the man's background which is filled with horrendous physical, mental and sexual abuse from childhood, turning him into the monster he is today. From minute one, he is thinking about his next victim. The perfect torture and kill. His stop in a cafe doesn't pan out after he works himself into a sexually violent frenzy while looking at two unsuspecting women sitting and having coffee. He takes a cab ride whose driver turns on him. It's not going well.

While running through the woods from the female cabbie, the man happens upon a house that he imagines is vacant. Once inside, he discovers a wheelchair-bound, mentally challenged man who calls him "dad" and this sends the killer into a panic. To make matters worse, the challenged man's sister and mother come home and after some skulking around, they are attacked by the psycho. What happens from there is a frenzy and flurry of violence, fear and utter madness as he works to try to make these the perfect kills. He wants to not get caught, but be given some powerful stature as people see him as the most dominant of men. In fact, this need to be regarded and feared (as he is fearful) is his downfall. He can't help but allow people to see his work.

Angst is a compelling, artistic and raw piece of filmmaking that draws you into the mind of an unhinged maniac. So much of the style of production is to keep the viewer off-kilter, uncomfortable and at an arm's length from the killer. There is little to no dialogue. The first-person narration, which usually draws you to a character, acted as a polarizing tool to make the killer less sympathetic. The amazing camerawork, which is almost like a character on its own, is a dizzying display to keep you off-balance. It reminded me a lot of Gaspar Noe's (who is a big fan of Angst and does an introduction) Enter the Void. High crane shots, low ground perspectives and my favorite, a first-person camera that encircles the killer, not allowing him to escape himself or you. It's a brilliant camera track built all the way around the actor, encompassing him.

All of the acting is great but the lead monster played by Austrian-born actor Erwin Leder (whose new movie PPPasolini has him playing the legendary director of Salò, or the 120 Days of Sodom, Pier Paolo Pasolini) is scintillating and engrossing. Leder emotes without use of dialogue and creates an air of fear, anger and lunacy that rivals the truly insane. Not everyone who initially viewed this in the eighties thought the same way about it as I. It was not well-received because of its bleak portrayal of violence, therefore it didn't do much box-office business. It got a VHS release in France in the early days and then a Blu-ray but it never got any love in the U.S. until Cult Epics finally procured the theatrical, DVD and Blu-ray rights. Their Blu-ray looks and sounds phenomenal and is loaded with extra features including commentaries, numerous interviews and a killer booklet jammed with more informative stuff.
Posted by Greg Baty at 7:41 PM