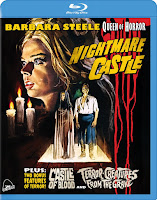 I have never been a big fan of the old black and white gothic horror like Mario Bava's early stuff. Truth be told, I've never given it much of a chance. I thought it was just boring old Italians running around castles with torches being chased by ghosts in long nightgowns. But when Severin Films - a home video company that I love - did the press for Nightmare Castle starring the gorgeous Barbara Steele, my interested was piqued. Not only do I like most everything that Severin has put out, but after doing a little research on Miss Steele, I was thoroughly intrigued by her unique sex appeal.

In Nightmare Castle, Steele plays dual roles. The first as Muriel, the murdered wife of Dr. Stephen Arrowsmith who killed her after finding her in a the throes of some pretty hardcore making out with her lover, David. In her dying breath, Muriel tells the good doctor that she has amended her will - which includes the entire estate - to leave everything to her step-sister Jenny (also Steele) who is a little mentally unstable. So after torturing and killing the two, Stephen perfects a serum from their blood to make his aging house maid/lover Solange young and beautiful again and come up with a plan to also get his dead wife's fortune.

He plans on marrying Jenny and slowly driving her more insane so that he will be able to prove that she is unable to take care of herself or the estate and she will be institutionalized for good. When he brings her home, we find out that Jenny looks like a twin of Muriel except she has blond hair instead of jet black. Stephen sets his plan in motion and hopes to make Jenny hallucinate with drugs but soon realizes that she is really seeingghosts and things, and havinghorrible nightmares. Stephen then calls her psychiatrist Dr. Derek to get the diagnosis and close out his plan, but Derek becomes suspicious of what's going on and investigates the weird goings on further.

I won't go into the details of what happens because the movie is a wonderful thriller full of suspense and real chills. You won't find an over abundance of violence, gore or sex, but the story, acting and overall production will keep any horror fan enthralled. The castle/dungeon setting mixed with the absolutely incredible direction by Mario Caiano and score by the  legendary Ennio Morricone creates a tense mood that most films can't capture. And all of the accolades for  Barbara Steele that I have heard in the past all are legit. She was wonderful in both the sultry Muriel and the naive Jenny roles.

In true Severin style, they were able to get their hands on the original film negatives and restored the picture and sound on high definition Blu-ray entirely uncut. It looks and sounds fantastic showing an improvement even over their earlier DVD release which had only a few noticeable imperfections. The blacks and whites are crisp and the contrast is spot on. The only bad thing I can say about it is that it is dubbed in English with no option for Italian with English subtitles. Severin also threw in lots of extra goodies for this great disk including two other full-length features of the same ilk; Antonio Margheriti and Sergio Corbucci's Castle of Blood and Terror Creatures From the Grave from director Massimo Pupillo, also remastered for this glorious release of gothic proportions!