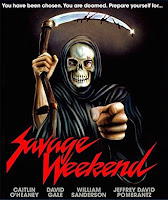 David Paulsen is a TV screenwriter, director and producer from the 1980s best known for the mega-popular television dramas "Knots Landing", "Dynasty" and "Dallas". But before he delved into the seedy world of nighttime soap operas, Paulsen cut his teeth writing and directing two very salacious, nay downright sleazy horror slashers. In 1976 he began shooting The Killer Behind the Mask but the movie didn't get picked up until a few years later by none other than Cannon Films who renamed it Savage Weekend and who also snatched up his second feature Schizoid, starring the ever-creepy Klaus Kinski. It seems totally natural to go from making exploitive tits-n-blood features to writing lines for J.R. Ewing, right?

Newly divorced Marie is getting ready to go to the country with her new beau Robert, her best friend and their flamboyant gay friend Nicky when she has an unpleasant run-in with her ex, Greg. The gang leaves for their trip and upon arriving we find that Robert recently bought a house and is having a huge boat built by the previous owner, Otis, a weirdo local with a bad reputation for being violent. This wouldn't be a "sleazy slasher" without nudity and sex and there is LOTS of both with different pairings of characters hooking up and making it look soooooo nasty while they're at it. It also wouldn't be a "sleazy slasher" without, well, slashings or some variations on killing, and about two-thirds of way through the runtime we finally get our first killing from a masked intruder.

That isn't to say that up to that point that there isn't some unpleasantness. The movie opens with a violent prologue murder that shows you Otis' past, setting him up as a suspect, natch. Paulsen also shows Otis branding a girl's chest with the letter "H" (for "whore", Otis ain't a gud speler) he believes was cheating on him. But the most squirm-worthy scene for me was a "Robert" getting a barbed fishing hook embedded in the bottom of his foot and another dude digging it out with a knife and pliers. Fuck, that skeeved me out. The trashy tone is set almost subconsciously when hot-to-trot "Marie" strokes heavy machinery, then later a cow's udders like she's trying to milk them of their seed—which I guess is a little truer with the latter.

Everything about this movie is just feels filthy and sordid. The "twist" is predictable and it does drag a bit in a couple spots but overall this is a movie I will watch over and over because it's a lot of fun. William Sanderson's portrayal of "Otis" is fucking awesome. He takes his backwoods, redneck character "Larry" from the show "Newhart" (sans his brother "Darrel" and his other brother "Darrel") and adds an insane psycho-pervert element that somehow endears him to my seedy little heart. Luckily for me and you pervs, Kino Lorber has resurrected this masterpiece of depravity in high-definition from the original vault elements and it looks fucking awesome. Forget those dubious DVDs with incorrect aspect ratios and shitty transfer from VHS tapes, this is the way Savage Weekend should be treated! The Blu-ray is rounded out with three awesome interviews with the cast and an original sordid trailer.
Posted by Greg Baty at 7:45 PM