Unless you are a completely clueless hardcore horror fan, you at LEAST know the name of the infamous Japanese “Guinea Pig” series from the mid-to-late ’80s; The Devil’s Experiment, Flower of Flesh & Blood, He Never Dies, Mermaid in a Manhole, Android of Notre Dame, Devil Woman Doctor, Slaughter Special. The series varies in quality and shock value, but together they are arguably one of the most notorious series of all time. Now Unearthed Films’ main man and first time director Stephen Biro is continuing the sickness with a brand new installment of sorts, but this time with an American touch, entitled American Guinea Pig: Bouquet of Guts and Gore.

Biro and company are using Flower of Flesh & Blood (Ginî piggu 2: Chiniku no hana in the native Japanese) as a template for the new movie, one could even say it’s a remake; just look at the name. In the original Japanese version a woman is kidnapped, strapped to a bed and dismembered and disemboweled by a man wearing a samurai mask. For the American film, two women are taken and wake up strapped to beds in a room full of men wearing assorted masks and armed with 8mm and VHS cameras. The two women are then drugged to immobilize them and some LSD to make their ordeal a little more nightmarish. The big guy in the Baphomet mask (credited as “the actor”) then proceeds to, you guessed it, dismember, disembowel and even filet the two women.

That’s really all of the “plot” you’re going to get. There are hints at a story like the VHS cameraman being forced to participate against his will and the “director” and “editor” barely being able to keep the actor in line but for the most part, it’s a lesson in human vivisection. You should know this going in. The Japanese set a standard with these movies, especially Flower of Flesh & Blood, of being crude and messy with little regard for what you think a movie should be. Director, writer and editor Stephen Biro takes that attitude and saws your fucking legs off with it. Limbs are severed (as well as a lower jaw bone in the most squirm-inducing moment for me) and filleted and guts are yanked out of the chest cavities. 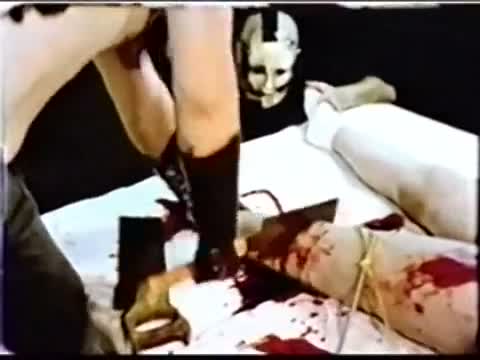 You’re not likely to care much about the victims other than the fact that they are human beings. You don’t have a chance to feel sorry for them on a personal level since neither of them utter a word once on the table and after being drugged, they don’t react to the atrocities happening to them. No screams, moans or even facial expressions. It makes what the men are doing cold and impersonal. In essence, you as the viewer almost feel like the killers must feel, in an odd way. The acting on the part of the group of savages is kept to a few lines of dialogue and interaction but mostly they are about their work of the utterly barbaric butchery and filming of these two female flesh bags. Knives, hand saws of all kinds and assorted tools of evil are used to relay what you need to know.

Though they did an adequately menacing job, the human actors are overshadowed by the marquee star; the practical gore effects, supervised by one of the best in the business, Marcus Koch (Nikos the Impaler, 100 Tears). Koch’s FX team consists of Stephen Biro, Melanie Dean (Hi-8), Shelby McIntyre (The Uh-oh Show, Brainjacked), Chris Polidoro (Andre the Butcher) and newcomer David Hood, all of whom should get a fucking award for their work here. The look of Bouquet of Guts and Gore is filthy, grimy and low-budget, adding to the “snuff” angle and overall feculent atmosphere. Also contributing to the squalor is the minimalistic, doom-laden soundscape created by Kristian Day and Jimmy ScreamerClauz. It adds a filthy dynamic and fullness to the entire production.

And last but not least, Stephen Biro, the man who put this entire sick project together with the sole intention of completely fucking you up. He once owned the rights to the entire Japanese Guinea Pig series (maybe still does?) and released them in a gorgeous, long since out of print box set to the American public. His Unearthed Films puts out some of the most confrontational movies you will ever see. Now he’s decided to put his own personal sickness where his business already is; the world of underground horror filmmaking. The plot, as simple as it is, was already there and Biro tweaked it to fit his vision. He put together an entire team of seamy talent, perfect for this project, and the outcome is a wretched and fetid initial entry into the American Guinea Pig series.
Posted by Greg Baty at 7:44 PM