Before coming into his own as a full-fledged exploitation director, Bruno Mattei worked as an editor on movies like Jesus Franco's Count Dracula (1969) and Joe D'Amato's Eva Nera (1976) for his father's film company in the '50s, '60s and early '70s. Not coincidentally Franco gave Mattei his first directorial gig by having him bang out 20 minutes of hardcore footage for the French re-release of Jesus Franco's 1969 film 99 Women and write the screenplay for the Joe D'Amato Emanuelle's Revenge. With these beginnings, you just knew Mattei would come out of the gates swinging when he would begin his own filmmaking career, and he did with two now notorious nazosploitation films SS Girls and Women's Camp 119 followed by a couple of "Black Emanuelle films" and even some nunsploitation thrown in for sexy measure.

But what of his later stuff? Right before his death in 2007, Mattei would go out with a "BANG" with a couple of superbly terrible yet entertaining shot-on-video zombie movies directing as one of his many fake names, "Vincent Dawn"; Island of the Living Dead and Zombies: The Beginning. Right before those two low-budget gut-munchers, Mattei would once again delve into the slimy pits of the Women In Prison (or WIP) sub-genre as he did 30 years earlier with classics like Violence in a Women's Prison and Women's Prison Massacre (both starring the incredible "Black Emanuelle" herself, Laura Gemser ,who he worked with many times throughout his career). But instead of shooting in Italy, which is much too expensive nowadays, he went the Roger Corman route and headed to the Philippines to shoot Anime perse ( translates to "Lost Souls") aka The Jail: The Women's Prison. 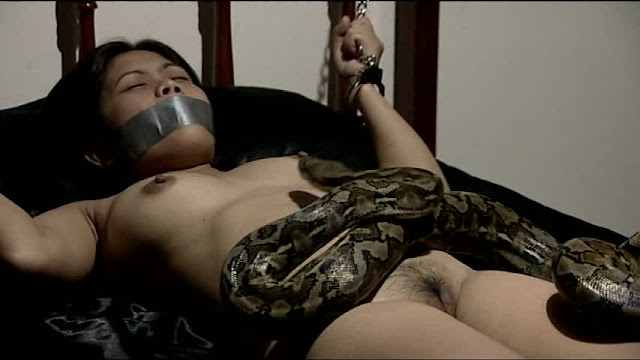 Mattei doesn't break much new ground here as far as the basic storyline of most all WIP movies. A few women are wrongly imprisoned at a shitty concentration camp-type jail in the middle of the jungle. They are degraded, beaten and sold to the local perverts for sex. And finally there is a jailbreak, but that's not all with Uncle Bruno. He gives us 30 minutes or so of his version of "The Most Dangerous Game" as the women are hunted by the jungle natives, guards and random assholes with guns and it gets very gory and bloody. He includes all of the staples of the genre like a sadistic warden and guards, rape, lesbian sex, shower scenes, nudity and torture but he makes it all as sordid and trashy as he can. Some of the scenes of the prisoners and hunters running through the forest gets a little boring, but overall Mattei keeps the action going. The first half of the movie is WIP and the second half turns into junglesploitation/cannibal-type gore.

Some of the seedy highlights are the warden whipping a dead woman's naked body to make a point, a Caligula-like orgy, a prisoner shot like 47 times with a shotgun at point-blank range, lives and is gang-raped, and finally a naked woman tied to the bed and a huge python slithers all over her before making his way into her most tender of areas. Luckily (or maybe not for some of you real weirdoes) that scene was cut away from before you see the actual penetration. Most of the inmates are obviously just regular locals who happen to be willing to get really nude and dirty. Aside from a couple of exceptions they are relatively unattractive and not a turn on to look at, but that just makes the hot ones seem even hotter. Awesomely, these Filipinos speak with perfect English accents through atrocious dubbing. If you are a fan of bad, yet entertaining exploitation, you will NOT be disappointed with The Jail: The Women's Hell. 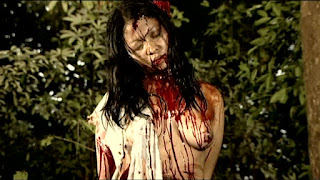