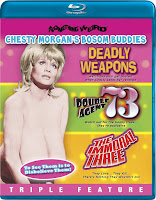 Polish-born Lillian Stello (current married name) moved to the United States in the 1960s with then husband Joseph Wilczkowski, who was later murdered during a robbery when she was just in her twenties. After his death, Lillian would become an exotic dancer and create her stage name "Chesty Morgan" in order to make money for her and her two children in mid-60s New York City. She not only made quite a bit of cash but she also got notoriety and gigs all across the country from stripping. In 1973-74, enter notorious New York exploitation filmmaker Doris Wishman who hired Morgan for two films, Deadly Weapons and Double Agent 73. From there she went on to have a bit role in Fellini's Casanova which ended up on the cutting room floor but is in a documentary that can be found on the internet.
Deadly Weapons follows Chesty's hoodlum boyfriend as he double-crosses his boss and tries to make some money on the side. The bossman finds out and send over a couple of thugs to kill him, which Chesty hears while she is on a phone call with him. After hearing his last words, she puts the clues together to find his murderers and take her revenge. Her plan is to find the guys, seduce, drug and finally smother them with her gargantuan boobs. Double Agent 73 is along the same lines except she is a secret agent who is sent to take out some counter-agents who may have killed her fellow operative. The best part of her plan is they have implanted a camera in her left tit and she must take pictures of the guys she kills by lifting her mammoth mammary. *CLICK* Smile, you're on Titty Camera!

Some people mistakenly think that Double Agent 73 is a sequel to Deadly Weapons but it is clear by the ending to Deadly Weapons that this is not the case. Oddly the last film in this Something Weird Blu-ray Triple Feature, The Immoral Three, is indeed a sequel to Double Agent 73 though it doesn't star Chesty as "Jane" aka "Agent 73". That role was filled by one-time actress Cindy Boudreau who plays both "Agent 73" and her daughter "Jenny". Jenny and her two estranged sisters Sandy and Nancy have just gotten word that their mother Jane has been murdered. They are told by the executor of the will that they must find the killer before they are to inherit three million dollars, if they die during their missions, the money is split to the living sisters. If they don't find the murderer at all the money will go to the trustee. Sexy and violent shenanigans ensue. 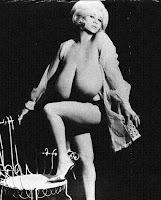 All three of these movies were directed by the infamous New York City exploitation director Doris Wishman, who has brought you such raunchy swill as The Amazing Transplant and A Night to Dismember. Wishman has never been accused of being a "good" filmmaker. Her technical expertise is questionable at best. She points the camera at inanimate objects like feet, doors and walls for no reason at all. She trains the lens on Chesty's tits leeringly for way too long. At one point during Double Agent 73 my wife (who is not a "bad" movie fan) walked in the room and sat down on the couch for approximately 1.43 minutes and finally exclaimed, "I can't watch this, she can't even focus the camera!" And she's right, Doris Wishman and her long time cinematographer Charles Davis Smith have horrible eyesight or didn't know where the focus knob was (or maybe it was broken) because a good 30% of the shots are blurry messes.
"Messes" actually is a good way to describe all three of these movies, especially the Chesty Morgan ones. Chesty just doesn't know what to do with herself on camera. She constantly looks at the crew off-camera, makes really odd faces and just looks very uncomfortable throughout both films. The dialogue is canned and badly dubbed in later, funnily most of it is said while the camera isn't even on the character saying it, sometimes Wishman purposefully hides the actor's face to mask them not speaking as the words are said. The indoor scenes are obviously small rooms and some of the bigger shots are obviously stock footage (ex. the crowd at Chesty's striptease is hilariously huge and the people are dressed in formal wear). Honestly, all of these things made me love this triple-feature more. It's just so insane to think that people, especially a woman, would make these kinds of movies in the '60s and '70s with no regard for taste or technical know-how.
Something Weird Video, purveyors of such exploitation oddities, with the help of Image Entertainment released Deadly Weapons and Double Agent 73 on their "The Bare Box" DVD boxed set which also included more Wishman goodness Blaze Starr Goes Nudist, Diary of a Nudist and The Naked Venus. But The Immoral Three has only been available on DVD-R from Something Weird to this point and none of them has ever looked this fucking good. The high definition transfers looks fantastic with very little film damage, and that is mostly in The Immoral Three. The colors are really garish, as they are meant to be, and the detail is impressive for the most part. The 16x9 widescreen looses a small amount of information from the full-screen (possibly open matte) DVDs but really, who the fuck can tell or give a shit with Doris Wishman at the helm? The soundtracks are a little hissy but nothing too distracting and the extras are slim but the Wishman trailer vault is a good time.
Posted by Greg Baty at 4:20 PM