If you are a fan of Christina Lindberg but only know her from Thriller: A Cruel Picture (1974), you are missing out. She has made some 20-25 movies, most of which are softcore skin flicks like Anita (1973). Her angelic face complete with pouty, innocent expressions are mixed with a curvy, buxom womanly body that would make Russ Meyer's boner sweat. Who cares that her acting ability extends to being the same quiet, naive, troubled teen girl that gets taken advantage of in almost every role? She has the best tits in retro-skin history and she shows them in this new Impulse Pictures release, Maid in Sweden!

Young, naive, country girl (big surprise) Inga is going to stay with her sister, Greta, in the big city for the weekend to get away from her parents. When she arrives, she finds that her sis is shacked up with a guy, Carsten, who is a real jerk-face. The couple begins to argue because he doesn't want Inga to be there and makes fun of her for being such a "little girl". So Greta and Carsten set Inga up with his friend, Bjorn, to get her out of their hair. At first she is shy and elusive, but once Bjorn gets her back to his pad and forces himself on her, it's love (lust?) at first boff.

Inga tries to hide her new affair from her sister because she is ashamed because she thinks it makes her a whore. Greta begins to ask questions and gets suspicious after Inga starts coming home late, not calling... you know, the kind of stuff you do when you're busy fucking a Swedish dude. Soon Carsten gets wise and tells Inga that he won't tell anyone, but his silence comes with a price; HOT LINDBERG LOVIN'! So the young, naive milkmaid (it's a stretch for the movie title for sure) returns to the farm a changed girl. Full of life, experience and Swedish dude juice, YA!

In the truest sense, this is a horrible movie. The plot, pace, editing, direction, cinematography, dialogue, acting... everything is bad. It's just an over simplified "country girl goes to big city to get life experience" story with tits. Don't get me wrong, if you are a fan of Lindberg, you should definitely pick this up. It showcases her (*WARNING: CLICHE PUN ALERT*) assets better than Anita or Thriller (taking into account that the hardcore scenes were not her). One scene of her masturbating is really hot even though it's not graphic at all. And the shower scene... oh, the slow-motion, wet boobie rubbing...

... oh, sorry, it's like a song that gets stuck in your head, only it's big, wet BOOBS! Anywhoo, the Impulse Pictures disk is pretty bare bones with only the theatrical trailer and a short, seemingly uncomfortable interview with an aging Lindberg about the making of "Maid". The full framed (4:3/1.33:1) transfer looks pretty old with some damage to the already unremarkable footage. The colors are muted and the contrasts are very low. The sound is also very uneven throughout and it'll have you reaching for the volume button. I don't know how much of this is "the best they could do with what they had", or just not putting much money into it. Either way Christina Lindberg fans should be very happy with the disk. 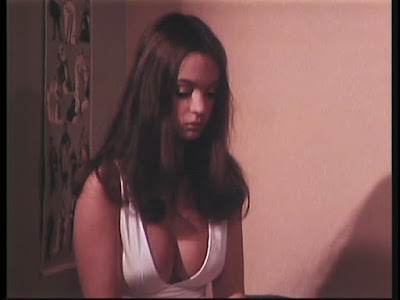