Henri Sala (aka "Ken Warren" aka "Sand Sunsea" aka "H. Sala") was a French porn and softcore director for about a decade from the mid-70s to the mid-80s. As far as I can tell, the only English-friendly movie he ever did was also his only horror effort, Nightmare Weekend from 1985. The movie was shot by a French crew in a small, redneck town about an hour away from where I sit right now; Ocala, Florida. The cast was made up of mostly first (and only) timers, with a few exceptions like Dale Midkiff (Pet Cemetery), Andrea Thompson (Babylon 5, CNN personality) and Robert John Burke (Dust Devil). To say that the combination of foreign filmmakers and novice actors (the script was re-written numerous times in French and the translation gives us the often incoherent scenes and dialogue) gave birth to an absurd creation would be an understatement and might turn off some prospective viewers without a little explanation.

A brilliant scientist and inventor has created a super-computer with the ability to change the personality of a living being (if that "being" were to ingest a small metallic ball the computer has created by transforming inanimate objects into the orb). He and his headstrong and maniacal assistant Julie invite a group of test subjects, um, I mean fun-loving, sexually charged, young females to their mansion for a fun weekend. The doctor's daughter is also there looking for the meaning of life and love, asking for direction from George, a seemingly sentient puppet who is one with the computer and is her best friend and guardian. The chicks pick up some dudes on their way to the mansion to get some boots a-knockin' and while they are distracted, Julie goes against the wishes of her boss and turns up the ball power to 100 with gory results... ROCK ON! 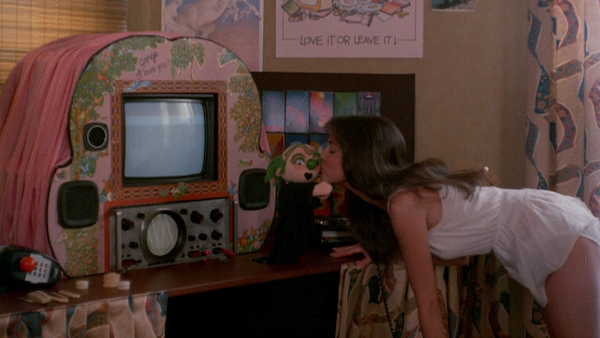 Now, some of you knowledgeable horror fans are probably asking yourself, "Hey, so there are metallic balls that attack people? Why does that sound familiar? Oh yeah, Phantasm!" I may be the only person alive who would even bring up the classic Don Coscarelli classic starring the iconic Angus Scrimm while talking about Nightmare Weekend, but dammit it needs to be done! They both have cool, murderous balls! BALLS I SAY! But really the similarities stop there like someone pulled the handbrake doing 100mph. Nightmare Weekend is so fucking bizarre it almost defies description. The fucking puppet! A dude who listens to a WalkMan and dances all through the movie! Pin-ball machine-tilting sex! Gory, melting zombies! And balls that force their way down your gullet to assume mind control! A catchy, cheesy theme song! And just ass-tons of gratuitous nudity and sex!!

Did any of that get your little pecker hard? Well, it should have. Yeah, it's slow in a few short spurts but nothing that will lose your attention. There is just too much awesome to allow that to happen. And Vinegar Syndrome, as per usual, went all-out with this all-region Blu-ray/DVD combo pack. I've only ever seen clips of the Troma DVD, which was horrendous, but this release was lovingly restored in 2k from 35mm internegative and it looks fantastic. Uncut and widescreen in all of its nutty grandeur. My favorite extra is seeing the alternate "R Rated" edits, which shows just how much of this movie was chopped initially.
Posted by Greg Baty at 7:27 PM