Last year in 2014, Unearthed Films founder and first-time director Stephen Biro unleashed gorified Hell when he relaunched the underground Japanese Guinea Pig series with an American flavor. The fledgling American Guinea Pig films started out with a blood-splattered bang with Biro's American Guinea Pig: Bouquet of Guts and Gore. He introduced the United States to some of the most visceral and graphic depictions of mutilation that have ever been filmed. Those incredible practical gore effects were done by Oddtopsy FX, a company created by blood and guts guru Marcus Koch (100 Tears, We Are Still Here). Marcus has done the effects for more than 60 movies and even directed three features and a short for the unfortunately overlooked anthology Hi-8 (Horror Independent 8). Now it is time for Koch to take over the reigns on the already classic American Guinea Pig series with his entry Bloodshock.

Unlike writer Biro's more caveman-like approach in Bouquet—with little to no story, focusing more on the carnage—his vision this time is more nuanced and focuses on dread and filth leading up to a frenzied splatteriffic climax. Bloodshock follows a man who wakes up strapped to a dental chair, getting his tongue cut out with scissors. He is then thrown in a padded room alone where he is intermittently pulled out to be subjected to physical torture. While the torture is happening, the "doctor" administering the increasingly sadistic pain is also draining the man's blood. After a few rounds of that, the man begins receiving notes through the seams in the pads of his cell. At first they are oddly playful and conversational. "Cat got your tongue?" But as his torment increases, the notes also become more and more intense. The combination of the agony of the physical pain and now the emotional torment is nearly unbearable. How much can one man take and will we see an end to his suffering? 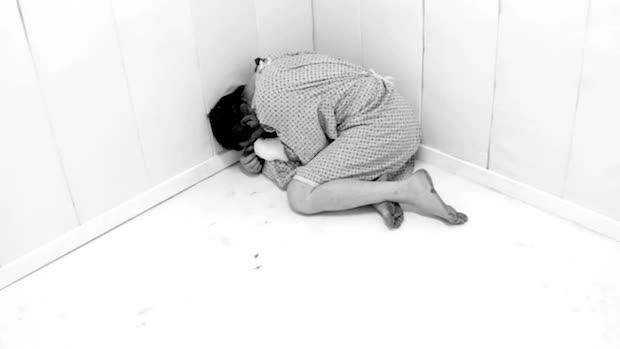 Bloodshock, the title of this second installment of American Guinea Pig, pertains to the blood that the evil, mad doctor is collecting as he inflicts pain on the man. According to the plot, when the body is subjected to such excruciating pain, it releases its own sort of hormones and chemicals, causing the patient to be able to withstand even more trauma. Koch uses this as a plot device but the real pulse of the movie is the mental and physical breakdown of "the man". His body is sliced, smashed, sutured, stabbed and operated on, without anesthesia, of course. His emotional torture is nearly as great because his isolation and lack of medical treatment are compounded by these mysterious notes being passed by someone on the other side of the wall. The dire circumstances are only made worse for the viewer by the incessant bleak soundscape that may be the thing that actually drives YOU insane. There are things that I cannot reveal about the plot that actually makes everything SO. MUCH. WORSE. You just have to trust me on this.

If you are just in it for the gore then you will not be let down. Marcus and his team outdid themselves pulling off things that I have never seen and, really, don't know if I ever want to see again. Have you ever watched the TV show "Operation" that used to come on PBS? Well, if those doctors didn't give a fuck about anything other than hurting the patient, then you get an idea about what you will see here. Hammer to the knee. Slices to the bottom of the feet. Dental trauma. Skull pulled back down to the brain. Arms and legs cut open to reveal bone which gets cut in half with a surgical steel cutting rope (I think?) and bolted back together. Open heart surgery. I could go on. This movie is horrific on so many levels. The worst level is the one I can't even tell you, so imagine that horror! Honestly, this movie fucked with me. I can't even say that I "liked" it. Who in their right mind could like something this grim and horrid? 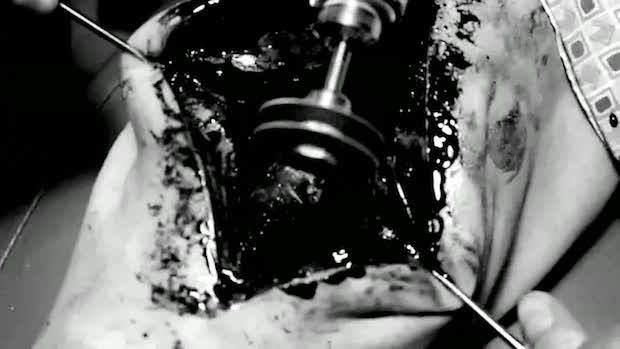 There is very little dialogue in Bloodshock and most of it is inconsequential anyway. But that doesn't mean that the acting is also negligible. There are only a couple of main characters, all of whom do a phenomenal job, but the standout performance has to go to the lead role of "the man" played by Dan Ellis. Ellis is a Plotdigger Films (Canadian gore and sleazemeister Ryan Nicholson's company) regular who has been in such seedy classics as Gutterballs and Hanger where he did did the roles proud, but you have never seen him like this. To quote "Pinhead" from Hellraiser II, his suffering will be legendary, even in Hell. Ellis wrung out every emotion it took to sell the most heinous of acts foisted on him. He couldn't have been more sympathetic, which made the story and carnage so fucking effective. The phenomenal acting, solid writing, outstanding direction, amazing effects and filthy aesthetics make American Guinea Pig: Bloodshock an instant extreme horror classic. But I can't really tell you to go watch it because no one should watch this unless you want to do yourself serious emotional harm.
Posted by Greg Baty at 8:00 PM