If you were a child of the '80s and '90s, there were a lot of dubious things we loved. Nostalgia has caused us to view a lot of these things with rose colored glasses, but that doesn't change the fact that, dubious or not, some of these things were pretty fantastic. If you were a horror fan during that time, it's fair to assume you were also a fan of Troma. Purveyors of trash, true champions of independent cinema. Not everything they released was quality (hell, some of it was unwatchable), but few of their titles were nothing if not interesting.

Vinegar Syndrome have been taking it upon themselves to start releasing and restoring some of Troma's more obscure titles. The past couple months have seen the release of the gloriously insane Nightmare Weekend and this forgotten '80s gem Frightmare (here under its original title The Horror Star). A lot of Troma's older DVD releases have suffered from some pretty lousy transfers, so I think viewing these films in sparling new transfers gives us a great opportunity to rediscover these works.

Frightmare is a pretty old fashioned yarn about an old washed-up horror icon (Conrad Razkoff, played brilliantly by character actor Ferdy Mayne) who is forced to do denture commercials to pay the bills. After his death, a group of drama students decide to break into his crypt, and take his body to an old mansion for a sort of final farewell... a party in honor of their fallen hero. Now, Conrad, a man who very much believes in respecting the dead, does not take kindly to this, and rises from the dead to seek revenge on the students in delightfully gory ways. 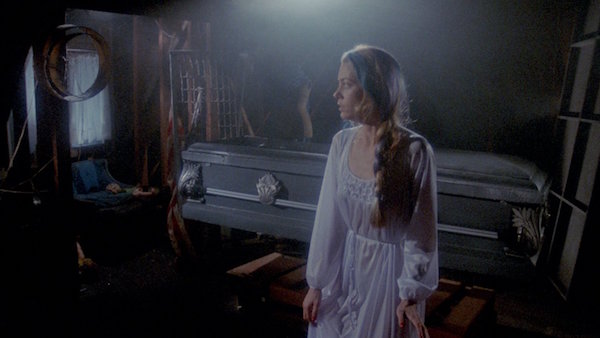 What makes this film stand out is the touch of class given to the material by director Norman Thaddeus Vane. It doesn't have the dirt and grime of '80s era exploitation flicks, but it does have the atmosphere of a sleazier Hammer film in a modern setting. It's dripping with atmosphere, and I think Vane being a nearly 20 year veteran behind the camera at the time is a big part of that. While there are a good share of death scenes, they aren't over the top by any means.

The real reason to watch the film, though, is Ferdy Mayne. He is an absolute delight to watch in every scene he's in. You can tell he's having a ball, relishing every line, no matter how ludicrous, and delivering a performance worthy of many of the horror greats. It's a shame he didn't do more films like it. The other performers (including a young Jeffrey Combs) are serviceable, but they are pretty much your typical slasher fodder from the era, so they are pretty disposable at the end of the day.

Frightmare is definitely something worth picking up. It's a fun, atmospheric film that deserves to be seen by a wider audience. It's a perfect Halloween film, and something familiar yet offbeat for fans of '80s horror films in general. Plus, the transfer is absolutely gorgeous.
Posted by Greg Baty at 6:26 PM