The Collinson Twins are Twins of Evil

I'm fighting the urge to start this article off by quoting "STOP... Hammer time!", but I am too much of a professional for that silliness. I will begin by saying that watching Twins of Evil made me think a lot about filmmaking these days. Today there is a lot of rehashing, remaking and re-imagining of old movies and ideas and the problem I have with that is not exactly the lack of originality, but the inability of most of them to entertain me. Most have hacky directors or horrendous acting and some of them are just plain fucking boring and I want to chew my own nipples off just to see if I'm still alive while watching them. But back in the day Hammer Films and director John Hough gave a clinic on how to tell a well-known story the right way. Apparently it just takes some damn talent... that and some really awesome twin cleavage.

Recently orphaned identical twins Maria and Frieda are sent to live with their fanatically religious uncle Gustav who is the leader of a witch-finder group called the "The Brotherhood". He goes around looking for evil (mostly hot chicks who he wants to burn at the stake for being Satan's whores) and has a real problem with Count Karnstein who lives in a huge castle, openly practices Satanism and is a secret vampire but is under the protection of the Emperor. Wild-child Frieda, who has caught the eye of the local school-master and resident hunk, doesn't like her uncle or his beliefs and takes a liking to the Count. Of course Karnstein also wants a little Frieda because he sees potential in her but to prove herself to him, she has to let him sink his fangs into her because if she turns into a vampiress, that means she is worthy. SURPRISE, she does and that's when the real fun begins. Sharpened stakes, hatchets and crosses galore! 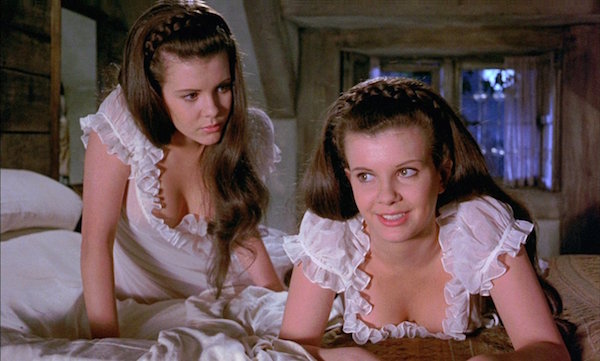 Director John Hough along with his actors and actresses took a story that has been told, retold, buried, left for dead, then dug up and told again and made it completely entertaining. Peter Cushing and his cold, blue eyes steals every scene he's in of course in his role as "Gustav" but he had stiff (and I do mean stiff) competition from the irresistibly cute and sexy ex-Playmates, the Collinson twins, Mary and Madeleine. Twins of Evil is chock full of that rich atmosphere that most Hammer films are known for, something that films these days often lack. They are also short on real scares but there is a scene in Twins in which a shrouded figure rises from a dead girl who has just been sacrificed and it was shockingly creepy, all without CGI! The violence was very tame, save a couple of scenes and the nudity was almost nil until one of the later scenes when Frieda tries to seduce the school-master by showing him her boobs and ends up in a topless wrestling match with him! But when you are talented storytellers, you don't really need to be overt.

Luckily for fans of the movie, as I am now, Synapse Films has pulled out all of the stops with this high-definition Blu-ray/DVD combo release. The new transfer is amazing. The details are strong, film grain is in tact, the colors pop and most importantly for this particular film, the contrasts were spot on. The shadows and light play a huge role in the tone of Twins. If I had to pick on anything at all it would be one or two short scenes flickered a bit in the blackness but that's just being snippy. Synapse also poured on the supplements like a feature-length documentary about Hammer's "Karnstein Trilogy" (Vampire Lovers, Lust for a Vampire and Twins of Evil) that could have just as easily been a legit release all by itself. Gothic horror, in particular Hammer horror (and it's cousin Amicus) has never been a favorite of mine but the older I get and more love I have for good stories and classic cinema, I may have to rethink my stance on the subject. Oh, and sexy twins with cleavage spilling from their bodices helps too.
Posted by Greg Baty at 10:09 AM