Evil Come Evil Go stars Cleo O'Hara, a sexploitation actress from the '70s who made a dozen or so films in the span of about three years, as the mentally unstable Sister Sarah. The good Sister is on a mission from Gawd (as said in her Southern accent) to murder all sexually unclean men; or in short, all men. She is preaching on a corner when she meets the extremely suggestible Penny (another little known sexploitation actress, Sandra Henderson) who she recruits her into the "Sisters of Complete Subjugation" to help her do the Lawd's work. The duo set out on a fuck-and-kill spree like a couple of black widow spiders. Mayhem ensues.

This movie is fucking nuts. The bloody effects are straight out of the H.G. Lewis guide of red paint. If I am to understand the interview with producer Bob Chinn, the FX were done by none other than Johnny Wadd himself, who Davis and Chinn were working with at the time. The production values are so shitty, at one point you can clearly see them pouring red paint from a can onto a man getting stabbed. In another scene, while there are lesbian shenanigans going on, a cat strolls into the frame (obviously not in the script) and walks on one of the naked women. The titular play on words (after you come, you get killed, get it?) and dialogue like "What kind of freak are you? Singing hymns while I'm giving you head?" made me giggle like a little girl.

On the same disk, Davis' hardcore effort Widow Blue! starts out as wacky as Evil Come, Evil Go ended. Eva is sitting on her couch smoking a doobie, looking baked out of her mind until she passes out. Eva is cheating on her husband with Jerry, who is also cheating on his wife (played by Walt Davis himself) and the two plan to kill her husband thus the "widow" part of the title. Oddly, to do so, they have Eva's brother have sex with her husband and kill him after they finish. This apparently turns Eva on and she insists on fucking Jerry right there on the dead body, during which she reaches over and sucks his dead dick! At this point Jerry gets worked up and he orders the siblings to fuck on the coffin of the dead guy which turns into an orgy, yeesh. Some other weird shit happens, then a cheesy twist ending. 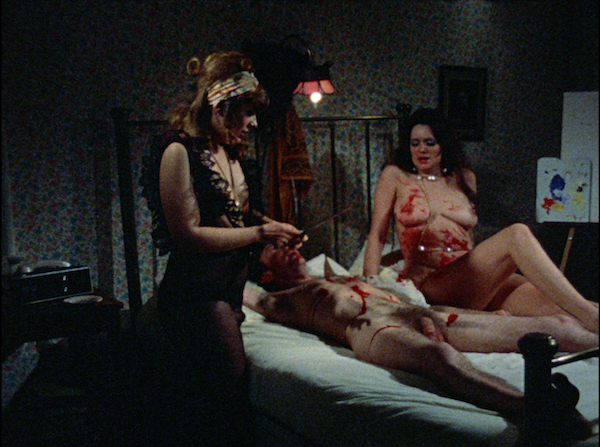 Widow Blue! is obviously fucking demented. It has the same very low production value of Evil Come, Evil Go but with disgusting hardcore sex. I mean, these people are pretty hard to watch having sex, never mind the nutty shit they are into. At one point, stage direction can be heard during one of the sex scenes. Fucking what? Head chops, an oral castration and John Holmes trying to feed his semi-flaccid cock into a bored looking chick. This movie is a fucking mess but the whole time you're watching it, you can't take your eyes off of it and your jaw never leaves the ground. Interestingly, if you Google image search "widow blue", it is apparently now a strain of cannabis. Word!

There is a third movie with this set entitled Oh! You Beautiful Doll that is on the second disk which also houses the extra features but honestly, I couldn't make it though it. It stars Cleo O'Hara again but this time they made her look repulsive as a washed-up actress who gets into weird sexual shit. It was ultra low-budget like the other two films, but this one was gross, unpleasant and most importantly, boring. Watch the other two and only proceed here if your OCD kicks in and you have to finish the set. The interview with Bob Chinn was interesting as he remembers working with Davis on multiple films and the kooky shit that happened. His story of Cleo O'Hara telling him that she was "getting her pussy tightened" is worth the price of admission alone.

This collection, The Films of Walt Davis, is one of the weirdest, wildest and most offensive collections I've ever seen and it was awesome!
Posted by Greg Baty at 7:53 PM