The Haunting of Morella: Witches Are Bitches

If you are a child of the '80s as I am, you may have been a fan of the Scott Baio TV series "Charles In Charge". As an adolescent boy trying to break through into manhood, that show would give me one of my first teenage crushes. No, not the first incarnation of the show with the two geeky sons and one frizzy-haired daughter, I was much more interested in the show's second try that starred the blonde goddess Nicole Eggert. Before you think that's weird, yes she was only 15-yrs-old at the time, but I was only 13 so stop thinking that I'm a bigger pervert than I actually am! Anyway, all I wanted from the first time I saw her standing there beside Chachi was to see her sans clothes. So when I recently saw she was in a Jim Wynorski horror movie from the early '90s with nudie veterans Lana Clarkson (Barbarian Queen) and Maria Ford (Stripteaser), I thought "OH GOD YES! EGGERT BOOBIES!!" Could my 25-yr-old adolescent fantasies finally be coming true?! Well, not so fast, pubescent me. 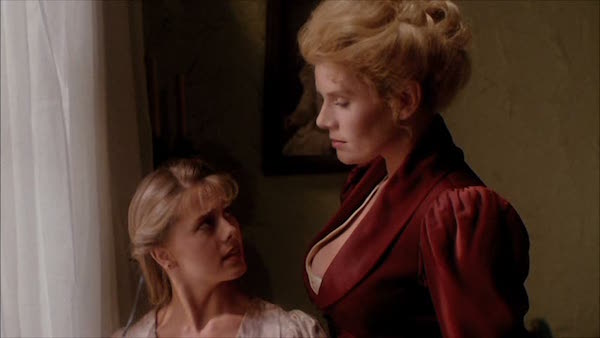 The Haunting of Morella has Eggert playing dual roles; one as the ritual character "Morella" and also her daughter Lenora. The plot is loosely based on the Edgar Allan Poe short story simply entitled "Morella". In the Poe story Morella studies the German philosophers Fichte and Schelling who are known for "transcendental idealism", which claimed that the objects of human cognition are appearances and not things in themselves. When Morella dies, she curses her newborn daughter who grows up to look just like her and after her baptism, is possessed by her mother. Wynorski's slant is that Morella was burned at the stake as a witch and curses her newborn daughter in hopes of being reborn into her. Seventeen years after her death, her daughter Lenora now a nubile teenager, Morella's follower Coel Devereux (Clarkson) thinks it's about time to get Lenora possessed by her mother. But Lenora is too headstrong to let the possession stick, so the next plan is to completely raise Morella's body from the dead ala "Uncle Frank" from Hellraiser and that means human sacrifice!

I was surprised at the very atmospheric gothic horror of The Haunting of Morella. It has everything you would want from a Hammer Film-esque gothic film; foggy cemeteries, old stone manors, candelabras, stormy nights and supernatural elements. Now, I'm not big on gothic horror movies unless they have sexy women running around in bodices with their hooters heaved up uncomfortably. Luckily for me Jim Wynorski must feel the same way because there is LOTS of heaving cleavage and naked boobies to boot! The statuesque and busty Lana Clarkson lets her puppies breathe in a few scenes, including a nice lesbian embrace with Maria Ford under a waterfall. The wonderfully well-endowed Gail Harris (Sorority House Massacre II) gets all kinds of nude in her small (but boner-iffically memorable) role. But guess who did NOT let the girls out to play, even though they want you to think she did? That's right, Nicole Eggert. They used a fucking body double for her nude bits and pieces. So you'll just have to imagine that the separate facial and body shots really are the same person. (But they're not!) 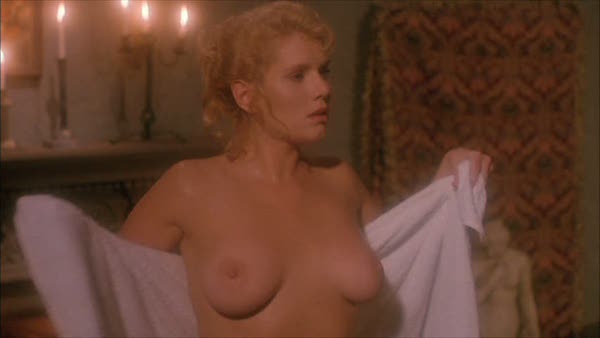 This movie is a ton of naughty fun. Aside from the copious amounts of nudity, there is also enough blood and violence to appease the horror fans. The movie never gets too serious and you are treated to stuff like a scene where Eggert is standing with her face at Lana Clarkson's giant tit level (see first screen cap above!), occult ceremonies and Bathory-like blood baths. And Eggert really hams up the acting as Morella, as opposed to the subdued Lenora (yeah right). From what I can tell the New Concorde DVD from 2003 is out of print and goes for a pretty penny on the secondary market and the VHS, while available for less than $20, looks like, well, a terrible fullscreen VHS. But now the good people at Scorpion Releasing, who have brought you such treasures as the Savage Streets 2-disk edition and a new widescreen version of the Alleycat, have given us a new widescreen HD transfer from the original interpositive! Yeah, it looks fucking awesome considering the soft focus of most of the movie. Yes, the boobs are wonderfully articulated in high-definition, which means you should really pick this up right fucking now.
Posted by Greg Baty at 7:43 PM