The Vile Virtuosity and Transgressive Tales of Marian Dora 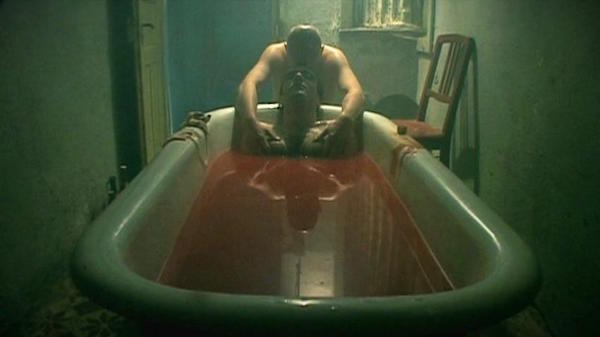 The incessant repulsiveness and depraved nature of Marian Dora’s films has the potential to irreversibly disfigure the fragile psyche of any average viewer. Needless to say, his cinema is acutely abhorrent—and certainly not for the faint of heart. His unwavering dedication to the art of the grotesque and the unspeakably perverse has gone unparalleled, reigning supreme sickness over underground cinema from all four corners of the world. It takes a brazen level of voyeurism to immerse one’s self in Dora’s work, and the ability to completely disregard any semblance of morality for the duration of his films’ run-time. For the sake of full disclosure, the process of viewing all of Dora’s films was a slow and steady test of moral and psychological endurance for the writer at the helm of this very article.

Realism for Art’s Sake in the Absence of Morality

Dora’s filmography has garnered a crucial level of controversy over his unrestrained exposition of real animal killings, palpable perversion and sincere on-screen sadism. In the history of underground cinema, there have been few filmmakers who have wholly committed themselves to the notion of pure authenticity for the sake of their own creative vision, in the desolate absence of any trace of virtue. Upon probing Dora for some insight into the purpose that realism serves in the overall context of his films, he reveals that his naturalistic approach to his craft runs much deeper than one might presume:

“It is my philosophy to be as authentic as possible, even in details that are not visible for the viewer; even more details than you may think are real. Looking at the film Debris Documentar for example, that film was more or less a documentary, but it was edited like a motion picture. As a result, the film is more real than it looks. Several scenes would have been much easier to fake during filming, but this would have been against the idea behind the film. Speaking about the controversial scenes, there are even more reasons going beyond philosophy: the first and maybe the weakest reason is that some of these elements are necessary for the characterization of the protagonists. The second, more important reason is to create the atmosphere that is necessary. There is always something in real pictures that you cannot achieve with fake scenes. But the third and most important reason is to make clear that what you are about to see is not made for ‘entertainment.’ Several scenes make sure that the ‘wrong’ audience will be rejected—those who want to watch a film only to ‘have fun.’ By watching such scenes I sometimes reflected [that] one or another aspect[s] of morality in my life may be wrong.”

The relinquishment of rectitude that is blatantly displayed in every one of Dora’s films reflects his opinion that the moral common in the Western world is responsible for the corruption of contemporary society. “Morality is suspicious,” he proclaims. “If movies are only seen as entertainment, it is not necessary to reflect [on certain societal] problems. For me, films are too important to be only escapism. I always had the feeling that there must be a further dimension [behind] watching and making films.” 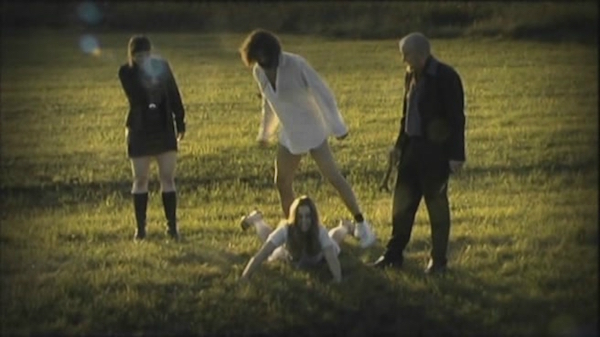 Deep within the putrefied heart of his films exists an appropriately abstract yet virtually imperceptible trace of heavy-hearted humaneness. A severely demoralized hollow shell of a human juxtaposes every despicable degenerate profiled in his films. Take for example his character "Katze" (played by Dora regular Frank Oliver, AKA Carsten Frank) in Melancholie der Engel: he is a simple man of unorthodox sexual urges who finds great pleasure in perpetrating perversities, but is adversely affected by the consequential burden of his violations that he carries. Moreover, his underlying thirst for penance is contradicted by the close venomous friendship that he maintains with Zenza Raggi’s character, Brauth—the quintessence of inexorable evil.

As is true of all of Dora’s films, Melancholie der Engel is as remarkably divisive as it is repulsive. Some viewers will dismiss his work as sick, fetishistic garbage—the inner-workings of a deviant pretentious pseudo artist. Others may discover a deeper existential significance underneath the lurid exhibitions of death, decay and defecation, as reflected in the malevolent-melancholic dichotomy of Dora’s characters. "Melancholie der Engel was a complex film, an experiment in many ways,” Dora reflects. “[I wanted to] do a film that is only comprehensible for a viewer willing to neglect morality and willing to identify with one of the two leading male parts. This approach is only acceptable for a very select audience, of course. For anyone else not willing or able to watch the film this way, it will be impossible to follow it.”

Dora’s name became synonymous with the subversive filth of underground art-house cinema with the 2006 U.S. release of his feature-length debut, the poignant and highly perturbing true-to-life re-imagining of the infamous Armin Meiwes case of 2004, titled Cannibal. For those uninformed readers, Meiwes amassed international notoriety upon his January 2004 arrest after killing and consuming the flesh of a voluntary victim. Also known as the ‘Rotenburg Cannibal’ or ‘Der Metzgermeister’ (The Master Butcher), Meiwes met a man by the name of Bernd Jurgen Armando Brandes on the German fetish website, ‘The Cannibal Café’ and proceeded to establish a consensual relationship with the man, which simultaneously reached its climax and conclusion in the fulfillment of their deepest most depraved sexual desires on March 9, 2001. Actual video footage of their meeting exists; thus authorities have confirmed the date and legitimacy of the events that allegedly transpired.

“I wanted to do Melancholie der Engel in 2003 but I couldn't raise the money,” Dora explains. “At that time, I already had made countless short films, documentaries, the feature film Debris Documentar about the pre-production of Melancholie der Engel, and was the second unit-director for several Ulli Lommel films. I was always responsible for the ‘edgier’ scenes. Ulli got the job to do a film about the Meiwes case for Lions Gate. He made many true-crime serial killer films for them, but he felt this stuff would be too extreme for him, and besides that he had not the time to do it. This is why he asked me to do it. I accepted in the hope that he would help with the money for Melancholie der Engel. I was never obsessive about the Meiwes case, but the motivation of the cannibal was easily comprehensible for me and the topic was very physical and fleshy. With a total budget of 2,000 Euro, I shot the film in one week without any team, only with a small camcorder and the two actors. When I screened the Film to Ulli he said that the film [was] good but he could not deal with it, because when the film comes in his mind he feels sick. That is why I had to release Cannibal by myself.” 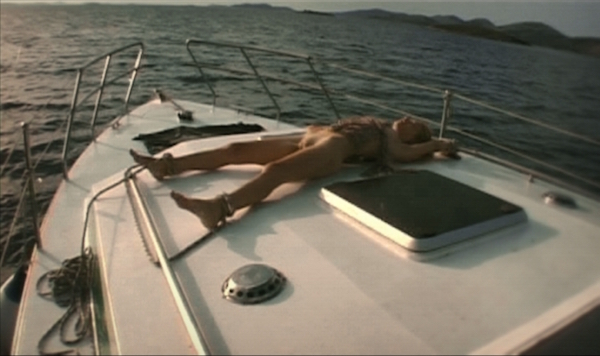 Released in 2014, Carcinoma—Dora’s most recent study in the bleak horror of human existence—won an award at the 2015 Sadique-Master Festival in Paris, France. “Carcinoma is the reconstruction of a real case,” Dora summarizes. “It’s about young man who is diagnosed with cancer and declines treatment. The tumor is growing, the man is losing his job, his girlfriend and his social life. He goes back to [live with] his mother until he dies.” Dora claims that the film was written in such a way as to adhere strictly to meticulous medical research.

“As simple as possible and while waiving all kinds of technical effort, a reconstruction took place,” he continues. “The original settings were used and the exact wording of the medical protocols was kept in place, as well as actually involving people who played the roles as themselves. As unusual as the case may be from a medical point of view, it is more the circumstances and the exact order of events that draw interest. Benefiting from his own problematic personality and a social environment that does not hear his cries for help while preaching body hostility and glorifying outer appearances, the catastrophe is inevitable.”

Aside from the notoriety that Dora has garnered for the relentless exploitative nature of his films, he has remained relatively grounded in his impermeable covertness, having largely managed to evade media attention and the ubiquity of a technology-driven era where privacy is generally non-existent.
“My films have no commercial appeal,” Dora explicates. “My films are ‘underground’ in the way I made them and the way I released them. It is not necessary to merchandise myself as a name or a ‘brand.’ Most of my films are very personal. They have to be because I did everything myself without any crew. So you can find my personality by watching the films; you don't have to know me personally. I try to avoid having my work as only ‘readable’ by knowing the filmmaker himself.”

To date, the German auteur of fetishistic repugnance has helmed five features under his most recognized moniker, Marian Dora: Cannibal (2006), Melancholie der Engel (The Angels’ Melancholia, 2009), Reise nach Agatis (Voyage to Agatis, 2010), Debris Documentar (2012) and Carcinoma (2014), as well as a handful of short films. Unbeknownst to the uninitiated, Dora has been prudent in the concealment of his true identity, having produced films under approximately eight different noms de plume.

“For some reasons, personal and legal, I had to change pseudonyms several times,” Dora divulges. “Some of them you do know, some not. It is obvious that I have to use another name when I am in front of the camera instead of standing behind it. Sometimes when I do a project that is contrary to my films that are well known, I change it.”

Speaking about the overall reception of his films in his native country of Germany, Dora further explicates: “There is a German underground film scene (that mustn't be confused with some kind of an ‘independent film scene’ with people like Ittenbach, Schnaas etc.). But there is no investigative journalism discovering what we are doing, fortunately, so we can do our work legally unharmed, even the more extreme stuff like several of my shorts. As for the cultural influences, for sure there are many cultural differences between Europe and the US, grounding on the specific history. Europeans seem to be not as "easy going" compared to Americans. You don't have to walk through Venezia to feel the morbidity everywhere in Europe. Personally, I feel and make decisions based on South European traditions. Ask me [to choose between] functional and aesthetic, I decide aesthetic. Ask me [to choose between] intelligent and beautiful, I decide beautiful. I remember a quote of an American critic, Chas. Balun, about a European Film—I think it was a Lamberto Bava Film. He said: ‘Short on sense, but long on style.’ That may be the essence of my work.” 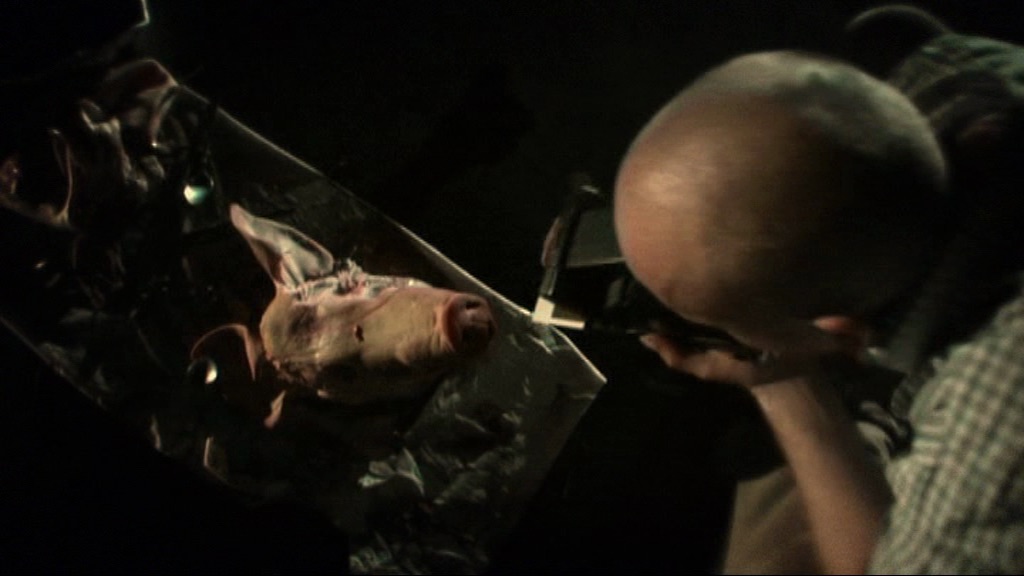 The Future is Grimm

Dora is currently overseeing production of his latest cinematic endeavour, an anthology titled Grimms Kinder. He, along with a miscellany of other German independent-underground filmmakers, will helm their own personal re-imaginings of the timeless "Grimm’s Fairy Tales". “I have chosen "Hansel and Gretel”, of course. Maybe the result can be compared to the Canadian anthology, The Profane Exhibit, but I hope it will be released in difference to that.”
Posted by Greg Baty at 8:25 PM