You Better Watch Out for the Christmas Evil

aka You Better Watch Out

Little Harry, his brother and mother are sitting on the stairs, surreptitiously watching Santa come down the chimney, consume some cookies and milk and finally deliver some presents. The boys are tucked away in bed when Harry decides to get up and check downstairs again. To his horrific surprise, he finds "Santa" making out with mommy. Jump ahead 40 years and Harry has an unhealthy affinity for Christmas (natch), so much so that he works at a toy factory, where he just got a promotion to supervisor, no longer working the assembly line. You get the feeling that Harry isn't really in complete harmony with reality as he does things that make you think that maybe he believes he's actually Santa Claus.

He sits on the roof of his apartment building, watching the children in their homes across the street through binoculars, muttering whether he thinks they are being naughty or nice. Then, of course, he hurriedly scampers into his home to pull out his giant books of children who are bad, and those who are good. Yes, he literally has pages for all of the kids he knowns and keeps tabs on them. He pretty much keeps it together until a guy at work talks him into taking his shift by lying to him and topping it off by saying he hates Christmas. This begins Harry's decent into what can only be called holiday madness. He makes his own bizarro Santa suit, super-glues on his beard and goes around the neighborhood stealing toys, creeping out everyone and murdering anyone who doesn't have Christmas spirit.

Filmmaker Lewis Jackson directed softcore sex comedy The Deviates in 1970 and the horror sex comedy The Transformation: A Sandwich of Nightmares in 1974 but is best known for the 1980's holiday horror Christmas Evil. Jackson also wrote the latter two before scurrying off into obscurity. It would be easy to lump Christmas Evil in with classic and beloved yuletide slashers like Bob Clark's Black Christmas or Silent Night, Deadly Night from director Charles Sellier but that would do this dark, psychological thriller a disservice. Yes, the story follows a deranged Santa who hacks people up but it focuses more on the mental breakdown aspect of Harry's story and less on the gory and gratuitous bloodletting. There are a couple of scenes with pretty surprising violence, like a hatchet to the head and a toy soldier's sword to the eyeball, but overall it's an exclamation mark on the proverbial sentence. 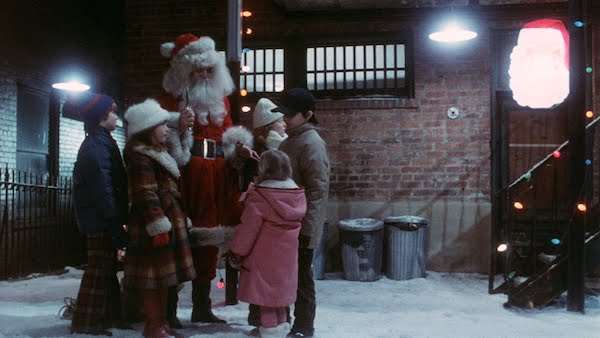 Harry, wonderfully portrayed by veteran actor Brandon Maggart, really just wants to bring Christmas joy to everyone, especially the children. Once he dresses up like Old St. Nick, his already obsessed mind becomes filled with delusions that he is indeed Santa. This further pushes his insanity to new heights; he paints his van like a sleigh and when he's driving, he "whips" the reindeer and calls them by name. The atmosphere of Christmas Evil reminded me oddly of another Bob Clark Christmas classic, A Christmas Story. In fact, Maggart actually kinda favors the father played by Darren McGavin. It's whimsical while also being very dark and disturbing. You sympathize with Harry and root for him when he does nice things and that makes the bad things all the more naughty. I can see how the ending may alienate some people, but I thought it was the perfect way to send Harry off, believable or not.

There are some deleted scenes on this Blu-ray from Vinegar Syndrome that would have actually added to the character and filled in some holes but I can see that due to pacing and time constraints, the cuts worked. The new 4k restoration from "35mm elements" looks unbelievably good. It's a definite upgrade from the already nice picture on the Synapse Films DVD from a few years ago. Christmas Evil naturally looks soft and this high-definition presentation preserves that while keeping the film-like look as well. There is nice detail in the important things like Harry's homemade Santa suit and the decorations around the town. The infamous John Waters is quoted as saying that Christmas Evil is "the greatest Christmas movie ever made!" and after finally seeing this whimsically dark holiday treat, I am inclined to agree.
Posted by Greg Baty at 1:48 PM