A Lizard in a Woman's Skin: No Zombies here

Italian horror, gore and exploitation maestro Lucio Fulci is most widely known for his nonsensical, superbly gory supernatural films like Zombie (aka Zombi 2) and The Beyond. But before he hit his gory late '70s and early '80s sweet spot, he made a couple of top-notch gialli including Don't Torture a Duckling in 1972 and A Lizard in a Woman's Skin a year earlier. While not being quite as otherworldly gore-laden as the others, these murder mysteries were no less brutally violent and unsettling. I am not particularly a fan of the giallo genre because most of them are unnecessarily and intentionally confusing to throw the viewer off the track. Sometimes though, a filmmaker can overcome that shortcoming with style, violence and sexuality. That happens to be the case with A Lizard in a Woman's Skin. 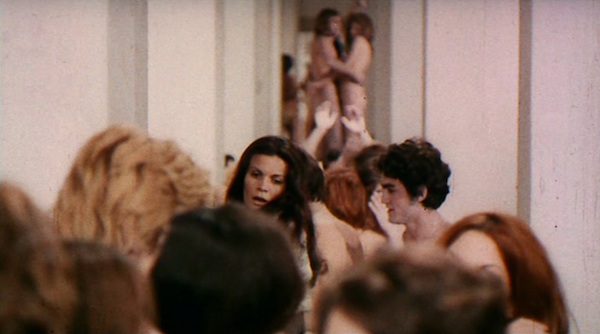 If you are familiar at all with the giallo formula, you know that most of the run time is filled with red herrings and police procedurals and A Lizard in a Woman's Skin is no different. Luckily, this is one of the few that doesn't get too bogged down and keeps the viewer's attention with thrilling suspense, enthralling camerawork and beautiful women. The LSD-fuelled imagery is absolutely captivating. A giant goose-pterodactyl thingy squawking around in slow-motion is something to behold! Fulci, along with veteran cinematographer Luigi Kuveiller (who also did fantastic work on Argento's Deep Red), uses what seems to be hand-held shaky cam close-ups to unsettle and create tension in some scenes, like a rather anxious dinner scene when the family is freaking out about the next door neighbor's antics. The gore not being center stage doesn't mean Fulci lets us down. The most disturbing scene shows disemboweled dogs strung up in some sort of experiment. Very startling imagery.

Mondo Macabro has been in the home video business for a while but has only recently gotten into Blu-rays. With only a few under their belt, the seem to know what they're doing in the remastering department. So far their high-definition transfers have been great. Like their release of The Fan from last year, Mondo Macabro released a limited and numbered edition of A Lizard in a Woman's Skin earlier this year through their website, and it's already sold out. Aside from an exclusive red case, booklet and cover art, the new retail version is the exact same cut (more than a minute longer than previous U.S. versions), transfer and extras. I got out my old Shriek Show DVD just to get an idea of the differences in the picture quality and they are very obvious. The new Blu-ray lightens the muddy scenes, deepens the blacks and pops the very vibrant color palette. Following Fulci's original production schedule, hopefully the Duckling will soon follow the Lizard on its way to high-definition glory!
Posted by Greg Baty at 4:37 PM