Alex de Renzy was an infamous New York City adult movie director known for such fantastic filthiness as Femmes de Sade and Long Jeanne Silver. Before he was in the business, he served in the United States Air Force and later began making documentary films. He took a trip to Copenhagen, Denmark for "Sex 69", the first adult film trade show in the country after porn was made legal. About a year later, de Renzy would make his first film, Pornography in Denmark: A New Approach. While having a few writing credits, a handful for cinematography and still more for producing, he was most widely known for his directorial work that would span more than a quarter of a century from 1970 until 1997, a few years before he passed away from a stroke in 2001.

For most of the '90s, where he shot almost exclusively on video, he would go by the name "Rex Borsky", but we all know his kind of smut anywhere. In 1978 he created what would arguably be his best movie by film-making standards; Pretty Peaches. He would also take a babyfaced, ample-bosomed young lady by the name of Desiree Cousteau and turn her into a superstar. She had already been in a few films like a bit part in Jonathan Demme's Caged Heat and Bob Chinn's Hot & Saucy Pizza Girls, but "Peaches" was the role she was born to play. A role that would land her the Adult Film Association of America award for Best Actress Award in 1979. The success of Pretty Peaches would spawn two good, but very different sequels starring such heavy-hitters as Victoria Paris, Jamie Gillis, Tracey Adams, Herschel Savage, Peter North and yes, "The Hedgehog" Ron Jeremy. 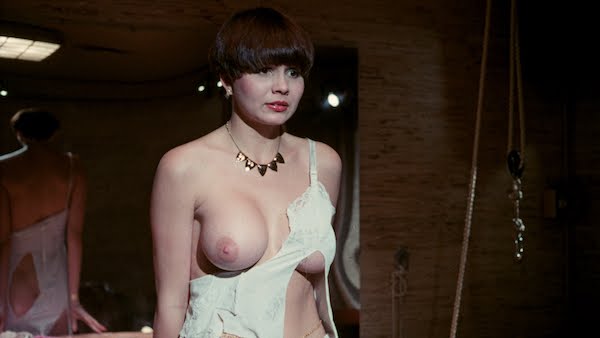 The original Pretty Peaches loosely follows the story of Maxwell Kenton's book "Candy", which itself was inspired by "Candide", the story by French philosopher Voltaire. In Voltaire's original story, the titular character is a sheltered optimist who, after seeing the evils of the word, rejects optimism. In Kenton's book, Candy loved to help people, only to be taken advantage of sexually by them. Peaches (played by Cousteau) is very much like Candy in that she is sweet and naive and allows people to dupe her into sexual situations. But she kinda has an excuse; she has amnesia after wrecking her Jeep. She is "rescued" by two men–one of whom fucked her unconscious body–and they trick her into thinking they want to help her cure her memory loss. Through a series of botched tries (including a graphic, full-blown enema!), you get the feeling that nothing is going to help. Well, maybe nothing save something REALLY shocking!

Pretty Peaches 2 isn't nearly as cinematic as its predecessor and it's probably the weakest of the trilogy, but that doesn't mean it's not as entertaining as fuck. This one follows the virginal Peaches (now played by the lovely Siobhan Hunter) as she seeks information about sex. Since her mother won't tell her anything, she goes to her dad (Herschel Savage) who tells her to "never be a tease" and to go see her crazy Uncle Howard (Ron Jeremy). On her trip, she encounters a trucker who picks her up, then gets a hooker in the hotel and she watches them fuck. Upon arriving at Uncle Howard's, she is introduced to his incestuous wife and son who have a threesome on the dinner table. Peaches wanders around the bizarre house and runs into an "oriental" statue that's alive and Jamie Gillis dressed up like grandma. They all fake showing her about sex but really they just want a piece of her or just sex with anyone in general. 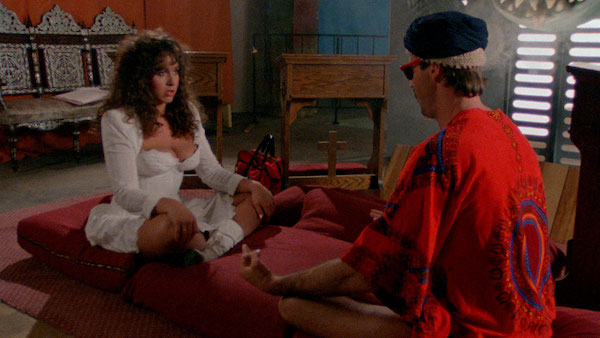 The third installment, Pretty Peaches 3: The Quest, may be the last but it's certainly not the least. It has more hot, busty chicks than the other two combined. In this one "Peaches" is played by the super sexy Keisha (I believe her whole name is Keisha Dominguez aka Melissa Christian), a brunette with gorgeous, big natural boobs and a wholesome face. "The Quest" she takes is one of enlightenment set off after her female doctor gives her a rather sexual exam and tells her that she needs to finds her spiritual side. So Peaches leaves her mother and boyfriend in the trailer park and heads out to find a means of spiritual awakening. Of course she encounters a plethora of sexually depraved men and women of God who take advantage of her like Jamie Gillis as a crooked televangelist, a lesbian cult and a mystical pornographer. But in the end, it's Peaches herself who finds what she is looking for within herself and becomes a leader of... homeless people?

Until a little while ago when Vinegar Syndrome released a limited edition Blu-ray of the original Pretty Peaches, I had never heard of it although I was vaguely aware of Ms. Cousteau. Now they have gathered all three movies in one magnificent 2-Disk Blu-ray release. It's short on extras (the limited release has some good stuff on it though) but long on dirty, sexy fun. All three movies look and sound fantastic due to the hard work of the guys at Vinegar Syndrome. (Do they ever sleep?) While there are some rather perverted sex acts–by normal people's standards–the tone of all three movies is very light and goofy. It never delves into roughie territory or seedy darkness like some of de Renzy's other movies. What you have here is a triple feature that will have you laughing and rooting for Peaches while your pants are down and you're wrestling with your bald little friend.
Posted by Greg Baty at 10:40 AM