One who knows Italian director Tinto Brass for his "cheeky" soft erotica like Miranda or The Voyeur could be surprised and maybe even appalled to find that he directed one of the most controversial, sleazy and grotesquely beautiful movies ever found in an art-house theater.

Salon Kitty (or Madame Kitty as it was renamed in the U.S. theatrical run) centers around a Nazi-smpathetic brothel in Socialist-run Germany circa 1939 run by the titular character Madame Kitty (Thullin). Nazi officer Helmut (Berger) decides in his quest for power to take over the whorehouse and stock it with "good Nationalist girls" which he finds and trains as whores by having them succumb to every sexual whim of a squad of SS soldiers in a giant orgy. To further their training, he also finds the most vile and deformed people he can and forces the girls to have sex with them. He then bugs each room with hidden microphones to record the inner secrets and perversions of high-ranking Nazi officers he plans to blackmail.

One of the girls --Margherita (Savoy), a strong Socialist follower-- catches his eye so he takes her as a mistress. But she has fallen for one of her regulars; a German officer who has a change of heart about the Nazi movement after finding his love for Margherita and plans to defect to the side of the Allied forces. Although she dislikes his lack of loyalty to Herr Fuhrer, her love keeps her devoted; but that is not so for Helmut who promptly has him hanged on a meathook for treason after hearing the tapes of the lovers' conversations. After Margherita confides in Kitty about the whole situation (after killing the Nazi john who told her that her lover had been killed), the two devise a plan with the help of a couple of anti-Socialists to record Helmut confessing to his treasonous plans in a time of weakness... like in the arms of a whore. 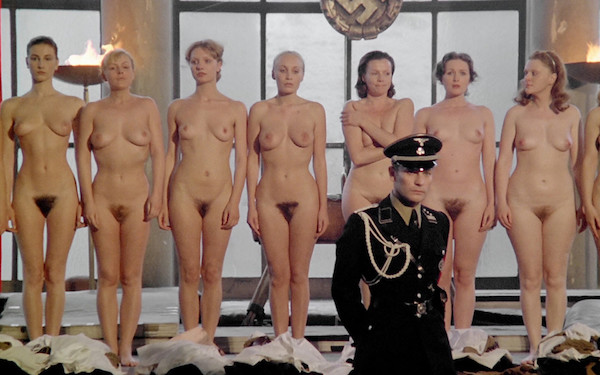 Have you ever watched a movie that was so good, you think about it for days? The characters haunt your subconscious and certain scenes invade your soul with garish brazenness. Tinto Brass' Salon Kitty is one of those very few films. The style seems so different yet oddly the exact same as Brass' other work that I've seen. It is as if Stanley Kubrick, Alejandro Jodorowsky and Tinto himself were the fathers of this wonderfully demented art-driven "nazisploitation" film. The elegant oddities of Jodorowsky, the aesthetically long camera shot that is a staple of Kubrick but still the wonderfully voyeuristic and artistic eye of Tinto all focalize the stylized vision that makes up the whole. The aberrant visuals conjured by Brass especially in the first 30 minutes or so of the movie will make you want to turn away but they are so stunningly shot, you won't. There is much one could take away from Salon Kitty about the underlying message of the perversity of power and so on but I tend to stay on the side of enjoying it at face value; gross shit and boobs. Well, that and a great story, etc.

The Blu-ray from Blue Underground takes an already gorgeous movie and really shows it off. The vibrant colors pop and astounding sets—which are arguably the star of the show—by production designer Ken Adams are showcased in stunning high definition. Aside from the occasional softer-looking scene, the transfer looks pretty flawless for something not shot in the last 10 years. The extras, which I don't often partake in unless I REALLY like the movie, were very interesting. Aside from the trailers and radio spots, the featurettes with Brass and Adams are very entertaining, especially the one with Adams who talks about his horrible experience working the Stanley Kubrick on Barry Lyndon and how Brass brought him out of his deep depression caused by the experience. He also goes over set designs he created for the movie and how they came to be, very interesting stuff once you see the film. This is a fucking must buy even for you who have earlier incarnations of the movie on DVD.
Posted by Greg Baty at 3:51 PM