Something old and sexual lurks under Harvest Lake 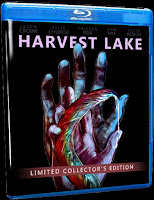 A few years ago I became Facebook friends with a hilarious and lovely actress named Ellie Church. Up to that point she was relatively unknown, unless you happened to see her at the Troma table at your local horror convention. But she would soon begin promoting a movie she and her beau Brian K. Williams were working on called Time to Kill, which was making the rounds at the conventions. I saw their movie at Cinema Wasteland that year, while drinking the free beer that they provided during the screening. Time to Kill was a straight action and sex-filled exploitation movie but you could tell that Brian–who directed, produced, edited and shot the entire movie–was a student of filmmaking and really loved what he was doing.

Around that same time a movie called Found, based on a book by Todd Rigney, was getting distribution and everyone was abuzz. Nearly everyone who had seen it raved about how great it was, and they were right. Director Scott Schirmer had created something special. The follow-up to Found, Headless, saw Schirmer as the editor and producer, handing the directing reins over to the capable hands of Arthur Cullipher. The team again hit a home run. They took the most exploitable part of Found (the vile, sleazy and gory movie-within-a-movie) and went crazy. Found and Headless are both movies that used their limited resources to the fullest and look like much bigger budget movies.

So last year when I saw Scott and Brian promoting their new IndieGoGo project Harvest Lake, I didn't even have to think about it before I was shelling out my $35 for the 2-Disk Limited Collector's Edition Blu-ray. With Schirmer directing, Williams shooting and editing, it promised to be something completely different than what we've seen prior from the duo. The promotional stills, teasers and full trailers looked absolutely gorgeous and serene, but you just knew that something sinister was lurking beneath the tranquil facade. Something primal and very old. There is more than meets the eye here and it threatens to be very unsettling. But could a movie with a relatively small budget pull off what looks to be an epic vision?

Harvest Lake revolves around a group of twenty-somethings who head out to a remote cabin on a lake to hang out for the weekend. There are weird sexual dynamics throughout the group right from the beginning; a horny, very open hetero couple (Dan Nye and Tristan Risk), a single hot chick (Ellie Church) and a recently dumped gay man (Jason Crowe), all just looking to get away for a while but with their own motivations. As the group arrives, they meet a random dude (Kevin Roach) who they invite to hang out with them. As they settle in, they individually have strangely sexual encounters with the forest. One is attracted to layers of wild mushrooms that remind one of a vagina, running with clear slime. Another is drawn to a phallic plant that grows and spurts while ooze. But the real danger is what lies beneath the lake and forest.

This is a movie that requires the viewer to look deeper. It's a many-layered thing. I won't go into much of the details because I think that a movie like this deserves to be deciphered by the individual viewer. It will unravel differently for each person who watches it and the subtexts will be more apparent to some than others. Sexuality is a complex animal and Schirmer and Company have taken that philosophy very literally on the surface. That serenity that I spoke of before is a tone set from the very beginning of Harvest Lake with the peaceful setting of the lake, the effective use of slow-motion and the wonderful ambient score by Adam Robl and Shawn Sutta. The creature and special effects by Clockwerk Creature Company (the same people who did Found and Headless) were outstanding, beautiful and grotesque.

The production values were top-notch all around. Harvest Lake looks like a bigger budget movie. It's slick, well edited and absolutely gorgeous. The movie's aesthetics, poetic sub-texts and artistic vision put it firmly into the "art-house" category while also being a draw to the more mainstream consumer with its horror mask and promises of nudity and sex. I saw shades of Lars Von Trier's Antichrist while watching. One particular scene in Harvest Lake reminded me of the most famous shot from Antichrist showing Willem Dafoe and Charlotte Gainsbourg fucking on the filthy roots with the hands and arms grabbing at them. Something about the grimy, earthy, spiritual quality about the two scenes really hit the mark.

I was lucky enough to be able to grab the 2-Disk Blu-ray with tons of extra features including short films by both Schirmer and Williams but those are long gone. There will be a retail release available March 18th that will not have the second disk but I believe will have the same extras as the first disk in this set, which is still a shit-ton. Do yourself a favor and pick this up when it becomes available on the Forbidden Films store website (LINK).
Posted by Greg Baty at 12:13 PM