Laura Gemser has a MURDER OBSESSION

The lovely Laura Gemser (Black Emanuelle) was my first real exploitation crush. Yes, there were horror movie scream queens like Jamie Lee Curtis (Halloween), Marilyn Burns (Texas Chainsaw Massacre) and Adrienne "Barboobs" Barbeau (Creepshow) who came before the Indonesian born Gemser, who set my loins aflame first when I graduated into exploitation films. When I received Murder Obsession in the mail, I jumped to the conclusion that it was just another Italian made, generic giallo... *HO-FUCKIN-HUM*. Black-gloved, faceless killer... slow, boring pacing... very little to get excited about. Gemser isn't even mentioned on the Blu-ray package anywhere! So I stuck the disk in, settled back on the love seat and waited for the worst. In the opening scene, the very first person you see is Black Emanuelle herself getting throttled by some madman who was hiding behind the curtains.

I was all at once super excited to see her and immediately concerned that she wasn't billed on the disk cover because it was just a cameo appearance. But nope, it turns out she is playing an actress in a movie scene named Beryl and the madman is an actor, Michael. He is a famous film star who has some serious demons and in the scene with Beryl, the crew has to pull him off of her when he actually begins to choke her. After gathering himself, Mike decides to take some time off and visit his estranged mother Glenda (giallo favorite Anita Strindberg) with his girlfriend Deborah. Upon arriving, they are met by the creepy butler Oliver and are quickly caught up on the condition of his mother.

Some of the cast and crew of the movie get there a little later to soak up a little R&R too, including Beryl (YAY!) The eccentric mother and butler meet everyone and soon the group knows that Michael apparently killed his father, The Maestro, when he was a boy and is suffering from mental problems. Of course, that lays the groundwork for people to begin being murdered by an unknown assailant. After a couple of them are thought to have gone home (nope, killed), the remaining guests are picked off one by one but not before having wacky visions and nightmares about Satanic rituals, giant spiders and swooping bats! Is there an actual killer or is there some paranormal activity going on here? The viewer may never know because this is one nutty, schizophrenic movie with lots of WTF? moments. 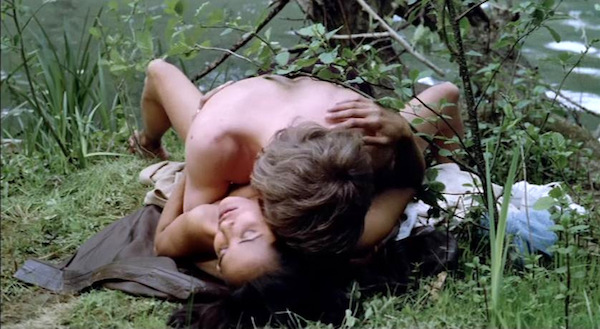 Murder Obsession may be the first giallo that I actually like a lot. Of course there's Laura Gemser running around naked, looking incredible, but there is also that delirious, erratic quality that is very entertaining. All of the women frolic around in see-through nightgowns the entire time. There are lots of pretty gruesome kills with possibly the worst gore effects I've ever seen. The SFX in general are laughable as the giant spider is a stuffed animal with person hands, and the swarm of bats fly around on the most obvious strings I've seen since Ed Wood. Everything is just so egregious and over-the-top, the pace didn't slow down until the last 20 minutes or so with the inevitable reveal(s). The explanations of all of the goings-on was somehow both boring and fascinatingly in-your-face ridiculous. The overly dramatic piano score by Franco Mannino wrapped up this absurd package with a daft little bow.

Leave it to the Italian based Raro Video to find this little known gem and to clean it up so nicely. The picture quality is surprisingly great. Some of the scenes are noticeably soft but there is plenty of detail overall and the color palette is vibrant. There is a very short deleted scene in the supplements that shows the original quality of the video before being restored, wow, what a difference. The mono soundtrack is very clean but doesn't compensate for the sometimes uneven volume. It's not bad enough to even worry about though. As per usual, my favorite extra is the included booklet containing Fangoria's Chris Alexander covering the film's history and a bio and filmography of Murder Obsession's director Ricardo Freda.
Posted by Greg Baty at 1:27 PM