THOU SHALT NOT KILL... EXCEPT maybe some dirty hippies

Imagine if you will; the "fake Shemp" zombie from the Evil Dead movies, Josh Becker, directing Evil Dead and Spider-Man franchise writer/director Sam Raimi in the role of a lunatic, murderous hippie cult leader in a story co-written by "Ash" himself, Bruce Campbell. Also picture that story being about four Vietnam soldiers who raid that cult's compound in a violent, bullet riddled massacre to save a loved one from anti-war protesters and bikers who are planning on torturing and killing the victim. Does that sound nutty? Campy? Fucking awesome? Well, it is all of those things and more.

The movie opens with a huge battle in the jungles of the 'Nam (actually a forest and grass knoll in Michigan) where Gunnery Sgt. Stryker and his squad are overtaking a village. After taking heavy fire and a couple of gun shots to the leg, he is sent home and reunites with his old girlfriend Sally. Three of his squad buddies come home on leave a little while later and meet up with Stryker to have a little fun while on R&R. Sally is kidnapped and her father (and the Gunny's friend) is murdered by the Manson-like cult and the body is found by the boys. Bent on revenge, the pissed off Devil Dogs drop their socks and grab their, uh, guns and head off to spill some dirty hippie blood. 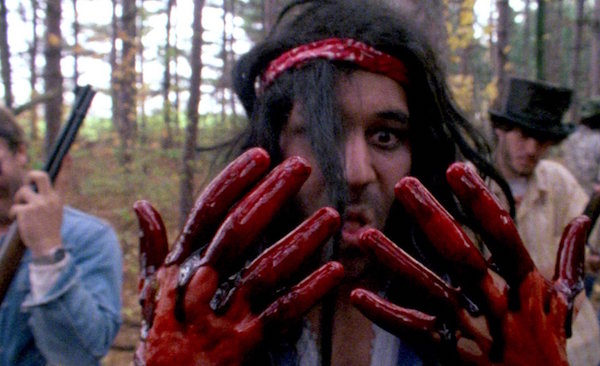 Every technical aspect of this movie is atrocious; the sets and costumes are high school drama club caliber, the acting is as cardboard as some of the buildings and the fight choreography is on par with professional wrestling on the local level. But guess what, this shit is badass and as fun as any movie I have seen in a while. The utter ridiculousness of the production values mixed with the nearly non-stop action makes this 83 minutes fly by. Gun battles, gore, ludicrous fight scenes, zany humor and lines like "My head hurts, my teeth itch, my feet stink and I don't love Jesus" make this an exploitation gem of explosive proportions. Long live Jack Stryker!

Not surprising is the love that Synapse Films put into this release. They took a relatively unknown, ultra-violent, war action movie and buttoned it up in Dress Blues, spit shined its boots and polished up the brass. The picture is great for a gritty 16mm movie; lots of film grain to give us nice detail and contrasts and the colors are surprisingly vivid. The only flaw I saw was about 20-30 minutes before the end of the movie, there is a color flickering from bright to dull for about 5-10 minutes. It's not horribly noticeable, but if you are looking for it, it's there. If you want an example of how much work they put into the image quality, take a look at the deleted and alternate scenes in the disk extras. The mono soundtrack was pretty clean though it's not going to knock your socks off. There are tons of extras in this release, some brought over from the Anchor Bay DVD, including the 48 minute short film Stryker's War starring Mr. Bubba Ho-tep himself, Bruce Campbell.
Posted by Greg Baty at 9:29 AM