Throw up your devil horns for DEATHGASM

In 1987 native New Zealander, and then unknown, Peter Jackson would cut his teeth in the film industry by creating what would become a classic trilogy of perverse and often very gory films, starting with the outrageous alien invasion flick, Bad Taste. A couple of years later he moved on to the grim and vulgar dark puppet show Meet the Feebles. But it wasn't until 1992 that Jackson really put his foot on the pedal and gave us a full-on splatter comedy by way of Dead Alive aka Braindead. Some 20 years later, New Zealand has had a resurgence in the horror-comedy business with titles like 2006's Black Sheep, Housebound and What We Do In The Shadows (both from 2014) and now the heavy metal gore-fest Deathgasm from first time writer/director Jason Lei Howden, who has worked as a visual effects artist for huge movies like The Avengers and of course, Peter Jackson's The Hobbit.

Deathgasm starts with poor teenage metalhead Brodie having to go live with his religious aunt and uncle and their asshole of a son after his mother is institutionalized. While trying to meet some new friends, he reluctantly finds a couple of Dungeons & Dragons-playing geeks to hang out with and while in a record store, befriends fellow head-banger Zakk. The four decide to form a band called, that's right, "Deathgasm", if only to piss off Brodie's relatives. While breaking into a dilapidated old house, Brodie and Zakk find a old, dying musician who gives them some ancient sheet music to protect. Little do they know that a satanic cult is after those papers too because they contain incantations to raise a demon who will give the "one with the blackest soul" untold power and success. Of course Deathgasm plays the music without knowing the consequences and literally all Hell breaks loose. Everyone within earshot of the music turns into zombie-like demons and threaten to kill everyone in sight. Oh, and they still have to worry about the main demon, Aeloth, The Blind One!

I am no lover of horror comedies. In fact, I tend to stay away from them because I hate that most of them go for the most obvious jokes and there is way too much self-aware bullshit. What makes Deathgasm work is the absurdity of the humor. In one of my favorite scenes, Brodie and Zakk use a plethora of dildos and giant anal beads to fight off a horde of demon zombies. That's some funny shit right there, I don't care who you are. But the star of the show is the gore gags. Belt sander to the face, head split in two by an axe, chainsaw disembowelment and my favorite; a zombie demon dick cut off by a weed "whacker" that has barbed wire where the string usually is... yeowch! There aren't a lot of "wink-wink, nudge-nudge" moments to ruin the fun, but I do love that one of the dudes toward the end of the movie is wearing a Bad Taste t-shirt in homage to Peter Jackson's classic sci-fi splatter flick. Rocking heavy metal music, comedy that actually made me laugh out loud and splatter-iffic gore galore. What more could a horror fan's little black heart ever ask for? Nothing. Deathgasm sells its soul for gore and laughs. It's the ultimate "get drunk and laugh your balls off with your friends" movie. 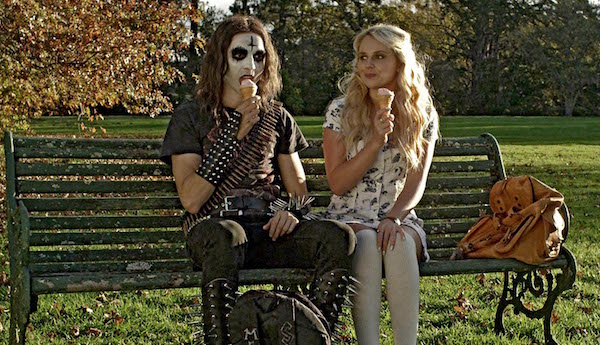