A few years ago there was a glut of extreme horror coming out of France colloquially dubbed "The New Wave of French Horror". Out of that stream of gory goodness came some very good movies and top filmmaking talent: Fabrice du Welz (Calvaire: The Ordeal), Xavier Gens (Frontiere(s)), Alexandre Aja (High Tension), Pascal Laugier (Martyrs) and the team of Alexandre Bustillo and Julien Maury (Inside). Since then, the hubbub has completely died and dried up so we are set for the next tsunami of awesome. Leading that charge is the Italian company Necrostorm with their output like Adam Chaplin and their new one The Mildew from Planet Xonader, but right behind them could be fellow countryman, writer/director Gabriele Albanesi. Now, I know what you're thinking; "Didn't we have an Italian gore heyday in the '80s?" Yep, and we are due for another Fulci or Lamberto Bava to rise from the land of olive oil.

Alessio, an Italian filmmaker who is a huge fan of those splatter films from the decade of Reagan and MTV, is told by his producer that he wants something different from him. Something less graphic because that shit is played out. He suggests that Alessio collaborate with very popular horror novelist Ubaldo Terzani to get some fresh ideas. So after reading all of his books, he moves in with Terzani to really envelop himself in the writing process, leaving his beautiful girlfriend alone at home. Terzani is an odd, mysterious and seductively manipulative man with perverted and possibly violent appetites. Alessio begins having horrific nightmares and the farther he falls down the author's rabbit hole, the more aggressive Terzani becomes. It's after Alessio's girlfriend visits that things get way out of control. 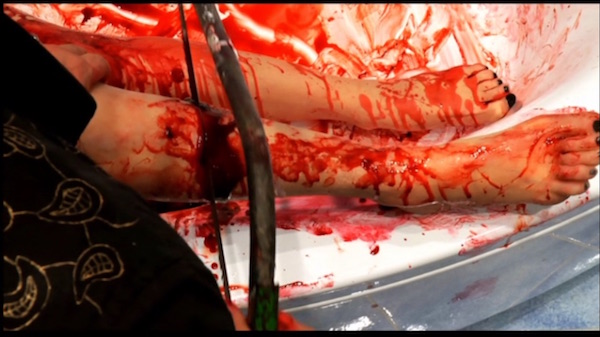 Obvious comparisons to John Carpenter's In the Mouth of Madness are inevitable. They both draw on the idea that authors have an almost a supernatural effect on the reader. Ubaldo Terzani Horror Show gives Terzani a sensual, hypnotic aura and an incredibly evil soul that his fans (and in my case, the viewer) are drawn to. Alessio represents the state of cinema in Italy right now as he tries to reestablish it as a leader in extreme horror. These two simple points make this movie much deeper than the films it obviously idolizes. The dialogue is rapid-fire, very real and clever. Gabriele Albanesi has done a terrific job on a very small budget. Although the story itself is pretty typical (you can see the finale coming a mile away), Albanesi used his actors, sets, driving score (Valerio Lundini) and special effects make-up (by Italian horror legend Sergio Stivaletti) to create a visceral, moody and haunting story that is sure to stick in your brain.

If this is the first you are hearing of this movie it's because until now it has barely been known outside of its native country. Thank god for Raro Video for bringing this grand guignol gem to the U.S. Their Blu-ray presentation, which contains a booklet with an intro/history of the film by Fangoria big-wig Chris Alexander, is fantastic. The picture and sound quality are stunning and showcases both the awesome set-pieces and sweet synth soundtrack. The supplemental material includes a 24 minute short entitled "Braccati" and a 35 minute making-of. Interestingly there is a screen-test for the sultry Laura Gigante who plays Alessio's girlfriend "Sarah". Gabrielle Albansi currently has a remake of Fernando Di Leo's Madness: Vacanze per un massacre in production, set to be released this year. Necrostorm, Raro Video and Gabriele Albanesi may be a part of something new and exciting right now. A "New Wave of Italian Horror" would be fantabulous!
Posted by Greg Baty at 12:01 PM