Tinto Brass gets a little CHEEKY!

In case you are not familiar with the awesome that is Italian filmmaker Tinto Brass, here is a crash course; he loves female asses. No really, the man is obsessed with plump, juicy derrières and never passes up a chance to zoom in on one or thirty. Besides this fact, he is probably best known for his gorgeously grotesque nazisploitation film Salon Kitty and doing the principal photography for Gore Vidal's Caligula. The nearly 80-year-old director made his first movie, Chi lavora è perduto (Who Works is Lost) in 1963 but honed his skills working with film greats like Federico Fellini (La Dolce Vita) whom he idolized. In 2000 he was a man well into his 60s with the sexual appetite of a college boy and making playful erotica like only he can with the aptly named Cheeky!, which I think is a better name than the original Trasgredire (Transgress).

Young, blonde, beautiful and sexually playful Carla (think a more mature looking Julia Stiles) is moving from Venice, Italy to London, England to go to school, leaving her needy boyfriend Matteo back home. When she arrives in town, she strolls through Hyde Park where there are couples making out and having sex everywhere. She engages some of them, flashing her pantyless pussy (or "fanny" as the Brits say) and enjoying herself in the process. Needing a place to stay, Carla meets Moira, a Gina Gerson (in Bound) looking lesbian real estate agent who immediately begins groping and fondling her as she promises to make her a really good deal on a very nice flat. Matteo begins calling Carla and asking her questions about who she's having sex with and freaking out with jealousy, accusing her of cheating on him. This just pushes her away and she hangs out with Carla at a sex party where gets buggered (that's anal sex for all of you yanks) by Carla's ex-boyfriend.

There is a dynamic between Carla and Moira that is kind of sad where the poor, pitiful love-struck lesbian falls hard for Carla, but Carla is just using her for kicks as Matteo finds out when he pops in to visit. This starts a huge fight between the two where he basically calls her a whore, she pleads with him to not leave her but he packs his shit and scoots. But on the way out of town, he passes through the very same Hyde Park and sees all of the free sex going on and in particular a sexy blonde making out with a dude on a park bench. After watching for a while and getting turned on, he notices an old dude also watching and when the two make eye contact, the old guy says "How do you like my wife?" This gets Matteo to thinking (along with a reference to an earlier scene where he sees Tinto Brass' movie The Key which is about infidelity bringing a couple closer) and he comes to the conclusion that all women lie and that lying and cheating turns him on, which will make his relationship with Carla stronger. 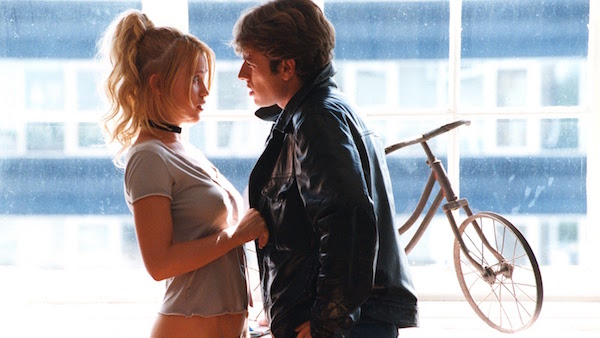 Coincidentally (not), that is the very same philosophy that one Mr. Tinto Brass explains that he has in the 8 minute disk supplement "Backstage with Tinto Brass". The odd sexual ideology aside, Cheeky! is an incredibly sexy and playful film that will turn on the most frigid of viewers. During the hour and a half runtime, I don't think Tinto goes more than 3-4 minutes without an incredible nude ass, breast or vagina (which he seems to like retro-hairy). There are copious shots of nude women close-up, from behind, bending over and showing their whole hoo-hah in graphic detail. I mean he REALLY gets in there with his perverted old camera. As with a few of his other movies, there is a thin line between hard and softcore sex that he blurs on a few occasions. It's obvious in a couple of scenes (including one where he gets to get his fingers wet) that there is actual digital penetration. Also, as in some of his other movies, he likes using a prosthetic penis for his men to appear more virile. Most of his perversity is focused on lesbianism in this, his first film to tackle the subject, and he does it well.

The Tinto Brass aficionados and purveyors over at Cult Epics have one hell of a release in this newly restored high-definition Blu-ray. Though relatively light on extras, the picture and sound quality are very good. The original 2.0 Italian and English tracks sound virtually identical and are plenty for the whimsical soundtrack and dubbed dialogue. The picture is that is really the star here though. Gone are the issues with PAL to NTSC conversion issues found on the DVD version and what you are left with is a vibrant color palette and relative clarity, especially in the close-ups. The overall picture comes off a little soft just due to the mood lighting and softer focus Brass is wont to use. I'm really happy with this release as I believe Cheeky! to be the epitome of feel-good sexploitation and erotica that couples can enjoy together and it's always better to be able to see the wispy, blonde butt hairs clearly when enjoying a Tinto Brass film.
Posted by Greg Baty at 12:43 PM