Italian film maker Tinto Brass is known in the U.S. and possibly the world for making the notoriously sleazy and grotesque Nazi epic Salon Kitty and the much maligned–and equally sleazy and grotesque–Bob Guccione (Penthouse magazine) vehicle Caligula in the mid to late '70s. Yet if you delve a little deeper into his work, you see that later on in his career he made a string of lighter, even "cheeky" some might say, European erotic movies with the focal point being his favorite part of the female anatomy; the buttocks, ass, arse, glutes, rear-end, etc. And for him, the bigger and more natural, the better. Kind of like Russ Meyer is with his fascination with big, natural ta-tas. Hmmmm, maybe they should have gotten together to make a Brass/Meyer super T&A flick...

In the first of these erotic films The Key, May-December couple Teresa and Nino Rolfe (the much older of the two) are having loads of marital problems in pre-WWII Venice, Italy. People talking behind their backs, her sexual modesty and Nino's jealously are just the surface of their woes. He gets a little aroused when he knows people are looking at his beautiful wife or lusting after her. The feeling of overwhelming jealousy puts him in the throes of sexual excitement. So to foment these situations, he plays little games with Teresa like leaving out his diary filled with his jealous "concerns" and setting up meetings with their daughter's studly fiance Laszlo who has the hots for Mrs. Rolfe and vice-versa.

It doesn't take long before Laszlo and Teresa are taking the bait and are in a full fledged affair. Starting out with just discreet looks and touches, it turns into out right in-your-face late night sexcapades with no concern for who knows and even feelings of love begin to creep in expectantly. The Rolfe's Fascist daughter then finds out about the indiscretions and falls in line with her father's whacky game for her own reasons. Nino begins to see an identity change in his wife as she transforms from a dormant cocoon to a free sexual butterfly. At first he takes full advantage of this for his own needs but soon it becomes too much for him to take both emotionally and physically. 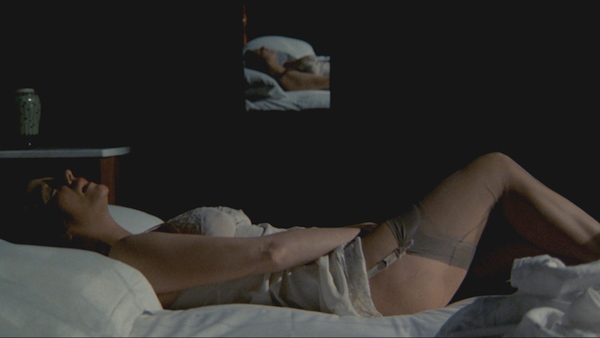 Don't get me wrong, this is sleaze, but it's artistic sleaze that can be appreciated by more than just the raincoat crowd. The artsy-fartsy pervs who usually turn their noses up at softcore flicks–yet secretly watch them alone anyway–can enjoy it too. Stefania Sandrelli as "Teresa" is one of the most breathtakingly sexy women I have ever seen in cinema or otherwise. She has something about herthat makes you just want to drink her in with your eyes and she plays this role with naked abandon. British actor Frank Finlay who plays the scheming "Nino" is altogether creepy and pitiful. He is an old man just trying to squeeze the last juice out of life and his smoking hot younger wife.

Cult Epics has released this erotic classic in a single disk Special Edition and in the Tinto Brass Collection Vol.1. The widescreen transfer looks fantastic but the dialogue is sometimes hard to hear due to the muddy sound mixed with the thick accents. But once the movie gets started, it gets easier to make out what they're saying. There is a 17 minute interview with Tinto himself, more Brass trailers, and a photo gallery to round out the extras on this fantastic disk. If you love erotica, art, asses or all three, pick this up immediately.
Posted by Greg Baty at 1:07 PM