Legendary erotic filmmaker Tinto Brass is known for his love of the voluptuous female tush. His films showcase the soft, round gluteus maximus with a hefty helping of bottom-heavy close-ups and gorgeous use of light and shadow to accentuate those qualities. In this late entry into his canon, Brass uses the breathtaking blonde Anna Jimskaia, in her only starring role, as his muse. She breathes and seethes blinding passion on camera and spend the majority of the film in various stages of undress. Her only job on screen is to ooze desperate sexuality and she does it with abandon. She is this movie and in a metaphorical kind of way, she makes love to Tinto Brass as much as the men in front of the camera.

The story goes that Marta (Jimskaia) and her newlywed husband Dario are visiting the romantic city of Mantua, Italy for a book festival where Dario has work. Even though they have been married a few short months, she has grown tired of Dario's inattentiveness in bed. Being in a different, beautiful place, Marta becomes restless and while visiting an art exhibit, she is sexually accosted by a dark, handsome stranger named Leon and doesn't know how to feel about as it lights a spark within her. On the advice of her best friend, she decides to use this little bit of info to make Dario jealous but all it does is make him want to fuck her and fall fast asleep. As it goes Marta begins meeting and amping up her escapades with Leon and her carnal desires blur the lines between love, lust and jealousy within the love triangle. 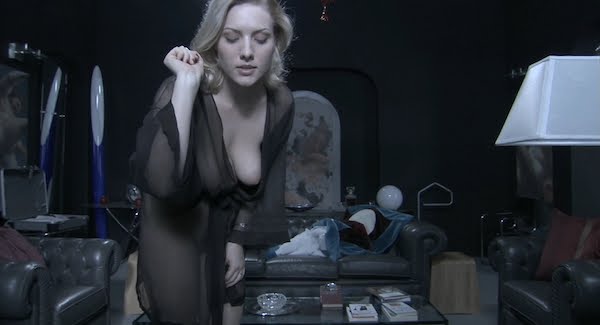 Brass has not missed a step in his latter career and actually seems to be honing his craft even sharper. Monamour is an absolutely gorgeous film that begged for a high definition release and Cult Epics answered the call. The director's use of light and shadow is on showcase and sets the sizzling, erotic tone. Seeing Anna's wonderful assets through Brass' eyes was a real treat. Bordering on the hardcore, the sex scenes made me think a lot of Zalman King's Red Shoe Diaries, which I always thought were some of the best erotica out there. The voyeuristic quality to the direction adds to the sweaty naughtiness. Brass goes a little further than I remember with some of his close-ups, as there are some shots of the actual ass hole, which took me out of the scene for a split second. His use of fake penis' also threw me off, but he more than makes of for it with his lack of boundaries with the female body.

As I mentioned previously, Cult Epics' 2-disk blu-ray of Monamour comes almost a year after their single disk DVD release. The second disk includes the hour long short film by Brass entitled Kick the Cock, a colloquial Dutch saying meaning something shocking or extreme. The film featuring the saucy Angelita Franco is an exercise in eroticism that ultimately is meaningless but pleasant on the eyes. Tinto Brass stars as himself along with Franco who plays his sultry maid, slinking around in very little while doing her maidly duties as Brass looks on, smoking his stogy and occasionally jerking on his fake penis that he pulls from his old man trousers. There is a "making of" for both films included in this set and a few very short featurettes that are worth a look. If you are looking for a steamy piece of eroticism to watch with your girlfriend or wife, this is a great alternative to the shitty XXX that passes for adult cinema these days.
Posted by Greg Baty at 9:30 AM