FANTOM KILER is the Sleaziest of Sleazy Slashers

(NOTE: This DVD is currently out of print.)

"WARNING: EXTREME EROTIC HORROR!!" boasts the cover of this Polish sleaze-filled, zero budget, giallo/slasher curiosity, Fantom Kiler. As someone like me (and most of my readers) who is always looking for something different, entertaining and challenging, how could I not pick this up right away? Well, mostly due to my unfamiliarity with it. I have been seeing it, as well as its subsequent sequels, on different genre DVD websites for a couple of years but never pulled the trigger until now. The cover looks as lurid and boundary pushing as anything I have ever seen. And after reading the synopsis, I just had to see it.

The opening scene finds two detectives investigating the body of a completely naked woman who has been stabbed to death. They reminisce about how this murder reminds them of a murder that happened recently in which a girl was naked and torn in half. We then meet a couple of janitors who work at the local bus station and spend their time undressing passersby with their eyes and spouting misogynistic lines about how all women are whores and "deserve what they get". Of course, they are on the short list of people being questioned by the authorities. But while they are asking questions, the black leather clad, mask wearing killer is at it again slashing, stabbing and sexually violating women and the police are no closer to finding any clues.

Let me start by saying, this movie may just be the worst movie I have ever seen from a technical standpoint. I have watched enough low-budget movies to know that there is a relative amount of leeway you give a movie because of the lack of funds to get good actors, sets, props, FX, etc. None of that has anything to do with why this one is bad. The acting is not even acting, rather people saying words that relate to the scene. Everywhere, including the "outside" scenes are obviously done on a set or stage with lights coming out of nowhere even in the night shots. I won't even mention the "mustache" one guy is sporting. The editing is so choppy and uneven that sometimes it is hard to follow. The aspect ratio changes from scene to scene and even shot to shot! Misspelled subtitles, amateurish camerawork and on and on. 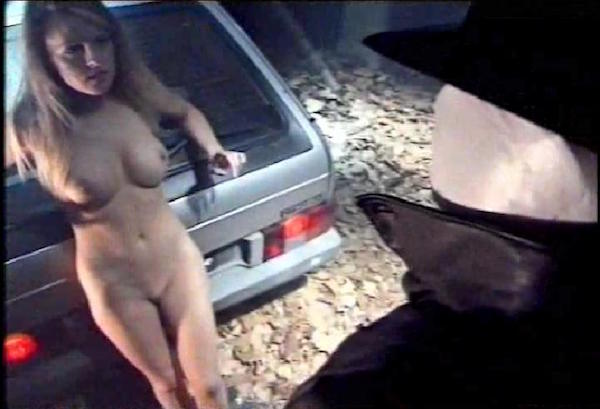 It's really a "laugh-out-loud because it's so ridiculous" kind of movie, especially the "King Arthur" scene. I won't even start to describe that. As I said earlier, the movie is super low-budget and the disk from Teraz Films is no different. It's a bare bones DVD with a slideshow and trailers as extras. The picture is pretty bad with the changing aspect ratios, dark colors, horrible lighting and film grit. But it really doesn't matter with this movie. The strange soundtrack and horrendous goings-on will keep you interested until the surprising ending that I didn't see coming and don't fully understand. You must see this if only to say you did and to tell others of it and it's offspring.

[EDIT: I've been informed by a couple of credible sources that the "Polish" thing was a gimmick. Those claims were dismissed by the filmmakers but that just makes this movie all the more awesome.]
Posted by Greg Baty at 3:13 PM