FELICITY Takes You to Hong Kong for Sexual Delights

Aussie filmmaker John D. Lamond made a couple of very good sex documentaries, The ABCs of Love & Sex: Australia Style and Australia After Dark, before filming his first feature film Felicity. Lamond was inspired by Just Jackie's classic 1974 erotic drama Emmanuelle (starring the amazing Sylvia Kristel) which was set in Bangkok and had a classy "Singapore Airlines TV commercial" look. Lamond told Mondo Stumpo*, "they had nice fashion, good photography and nice music. And that way it dresses it up and makes it all chocolate boxy. Because they did it with The Story Of O and they did it with the first Emmanuelle, which was partially in Bangkok. The second one which was in Hong Kong. And we’d been influenced by those films." So he set off to Hong Kong to do the bulk of the outside shots and Melbourne, Australia with production designer Stephen Walsh to do the inside set pieces.

The story follows the young and adorable Felicity Robinson who is blossoming into a woman inside of a sexually stifling Catholic girl's school in England. She and her girlfriends are becoming more and more curious about their bodies and sex, sometimes even experimenting with each other. But Felicity wants more and gets it when her father sends her on a trip to Hong Kong for the summer to stay with a hip, swinging couple Christine and Stephen. The sexy couple is good fodder for Felicity's curious voyeuristic exploits and of course, Stephen makes it known that he wants some of that and Felicity put on her own show for him. But it isn't until a swanky party that she finally loses her virginity to a drunk dude who doesn't care about her pleasure. But Felicity is introduced to local libertine Me Ling who shows her around the sexual underworld of Hong Kong and the gratifications to be had. Sex, lust and love are all on tap for precocious Felicity in the "Pearl of the Orient".

John D. Lamond set out to make a beautiful, classy softcore drama and he did that and more. Along with cinematographer Garry Wapshott (who also shot for Lamond on his two documentaries and his foray into slasher horror, Nightmares from 1980) the two made a gorgeous travelogue of the neon-encrusted downtown and the river-ways of Hong Kong. "[Garry] was interested in light sources–whether to have little fairy lights on the wall and so on. Each scene in Felicity had a source of lights, we’d play with light and colour." And those lights helped give the movie a bright, airy feel that kept the tone playful. That flirtatious and good-natured sexiness helped make Felicity a hit in Australia and all around Europe with companies competing for the rights, "When we put it up for sale in the Italian market, we had to beat the people away with a stick... We had about three or four distributors in Germany vying for it, half a dozen in France, quite a few in Italy." On a budget of just over $125,000, it grossed $532,000 at the box office in Australia alone. 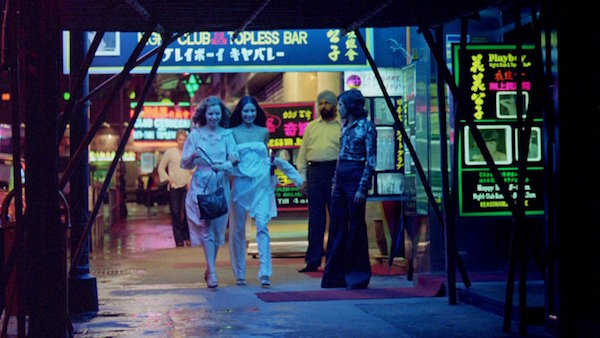 The film's progression through the city and the main character's interactions reminded me a lot of Joe D'Amato's "Black Emanuelle" series, especially (for obvious reasons) Emanuelle in Bangkok. Even Joni Flynn, the actress who played "Me Ling", looks a lot like Laura Gemser with her slightly Asian facial features, long black hair and tall, slinky body. Felicity is always concentrated on sex and the experiences associated but true to his vision, Lamond never strays into sleazy territory like D'Amato tended to do. Half of the scenes are filled with beautiful naked bodies, often in sexual situations but it never seems dirty, even when Felicity is giving head in a movie theater, getting fucked in an alley or being taken from behind by a stranger while watching another couple writhe around. Seedy actions handled with elegance and yes, class. The theme song is one of those smooth, catchy 1970's Euro-pop songs that get stuck in your head. Maybe one day there will be a soundtrack released or even a vinyl 45 of just the theme song with remixes by deadmau5 or David Guetta. Okay, maybe not.

Severin Films put out a DVD of Felicity about a decade ago which was the first time it was on home video here in the U.S. with the addition of some risqué footage. That disk offered great new picture quality that was restored from a personal print from the director himself and included commentary with Lamond and actress Glory Annen as an extra feature. Now they have enhanced this softcore classic to full high-definition and it looks great. Given the original look of the movie, this 1080p upgrade looks phenomenal and highlights the graceful camerawork. And to entice you farther, they have added both The ABCs of Love & Sex and Australia After Dark in their entirety as extra features while keeping the commentary track from the original DVD, plus two more. These were originally offered on Severin's Intervision imprint as separate releases, but now you can have them all on one disk for one low price. This release is everything a softcore erotica fan could want and more... lots more!

(*Visit Mondo Stumpo for the complete interview with director John D. Lamond)
Posted by Greg Baty at 11:07 AM