Franco Nero is the Gunslinger Known as... DJANGO!

Extras: The One And The Only: Interviews / The Last Pistolero / Western, Italian Style: A 1968 Documentary / International Trailer / Italian Trailer / Franco Nero Intro

As you more than likely know, the Quentin Tarantino feature film Django Unchained is just the most recent incarnation of the character known as "Django". Django has appeared in at least 30 unofficial sequels that were not written or directed by Sergio Corbucci or starring Franco Nero. The only one that comes close is Django 2: il grande ritorno aka Django Strikes Again or Django Rides Again from 1987 which does feature Nero as the titular character but is written and directed by Nello Rossati (aka "Ted Archer"). In that pile of Italian western madness, the character is never the same and there is little to no continuity. The only reason they exist is because of the success of the nastily violent, ultra cool original.

The first thing I noticed during the opening credits was the super cool theme song by Luis Bacalov that sounded very familiar. Then I was transported back to the beginning credits of Tarantino's film and it hit me; he used the same exact song! And why not, it is gleefully catchy and iconic. The actual opening is also very similar; in Corbucci's film Django is slowly dragging a coffin through the desert and in Tarantino's, two horse-mounted men are essentially dragging a chain-gang of slaves very deliberately behind them. The tonal effect is the same and efficacious.

A group of Mexican revolutionaries are about to whip a beautiful woman who they caught running away from them but are thwarted when Django uses his six-gun to blast them into dust, therefore saving the damsel in distress. The two walk until they end up in a small ghost town where the population has been plundered by war. The only people left are a few whores and an innkeeper. They get a couple of rooms and are told about Major Jackson and his band of marauders who "protect" the town (really just the innkeeper and the girls) for a price. When Jackson's thugs come around, they are met with force as Django doesn't take any shit. 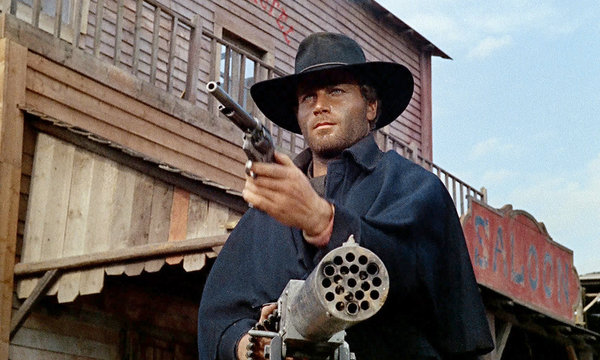 So the Major brings all of his hooded henchmen to kill him and are met with even more force; a giant fucking machine gun! This brings the attention of the gang of revolutionaries, headed by General Rodriguez, who quickly makes a deal with Django to use the machine gun to steal a shit-ton of gold in order to buy more machine guns and split the gold. But can you really trust a band of thieving, roving antigovernment banditos? On the other hand, can they trust a murdering, lone gun fighter with a mysterious past and revenge in his heart? What kind of games are they playing and who is double-crossing whom?

Django deserves its reputation as a very violent yet beautifully shot Spaghetti Western. I was pretty surprised how graphic it actually was being before the wild and wooly '70s where explicit violence and sex became the norm in genre cinema. Carbucci and cinematographer Enzo Barboni shot an almost gothic western complete with poetic imagery, like the end shot of a bloody six-shooter lodged in a headstone. I won't give away the details of that particular scene because it's worth the wait to see for yourself. It's very powerful. Franco Nero, as always, has style to spare and in this case it seems that Clint Eastwood's "The Man With No Name" character was a heavy influence on Mr. Nero. The quiet, hardened gunman with the steely eyes and the slow, deliberate look from under his hat is as cool as it ever was only this time, the film itself is much more graphic.

The Blue Underground Blu-ray is the best release of Django, if only because it's the most complete version. The 1.66:1 widescreen presentation has the same snowy, flickering I've notice with some of the earlier Italian Blue Underground high-definition releases but it's not a big distraction. The colors are vibrant and most of the film damage on the previous releases have been wiped out. I say "most" because there is, as a pre-film warning tells us, a small amount of film negative damage that they were unable to correct. Again, it doesn't take away from the overall picture quality at all. The original Italian audio is also featured here in DTS-HD mono quality and it sounds great, especially the awesome soundtrack. Django is one of those classic "must-have" films for Spaghetti Western fans or exploitation films in general.
Posted by Greg Baty at 12:19 PM