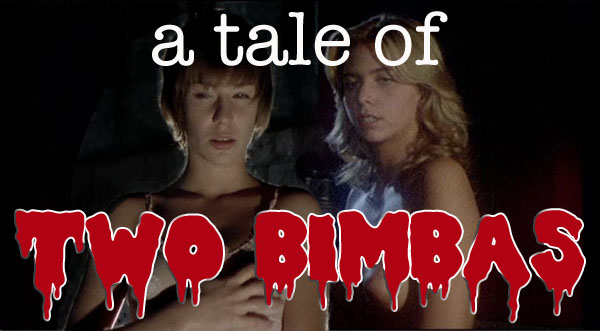 At one point Italian filmmakers seemed kind of obsessed with possessing young women with evil, undead spirits and making them act out in naughty ways. In two of those cases–Malabimba and Satan's Baby Doll (La bimba di Satana)–that isn't where the similarities end. They are both directed by men with the last name Bianchi, set in a gothic castle on the Italian countryside, revolve around a dysfunctional plutocratic family, have a character who's an invalid uncle and their Italian titles contain the word "bimba" which means "child" or "baby". When broken down "Malabimba" means "bad child" and "La bimba di Satana" translates to "The baby of Satan" or "Satan's Baby Doll". The details of the plots and the tone of each movie are different, but being so similar, I would call them "sister films" and they make for a great sleazy double-feature.

Malabima's family, the Karolis, have a seance in their castle to communicate with patriarch Andrea's deceased wife, Daniela. Instead they unleash the lustful spirit of Lucrezia, the promiscuous outcast sister of the family who may have been murdered by one of her many lovers. The spirit tries to take control of Sister Sofia, the housemaid, but when it doesn't succeed, it possesses the nubile 16-year-old daughter of Andrea, Bimba. After watching her father and aunt Nais have a torrid affair, Bimba begins to explore her own body and becomes obsessed with watching and having sex. Even her father, invalid uncle, Sofia the nun and her stuffed animals are not safe from the possessed teen's advances. How far will the spirit of Lucrezia push the innocent, young Bimba into sexual deviance? Pretty fucking far or didn't you read the sentence prior to the question? 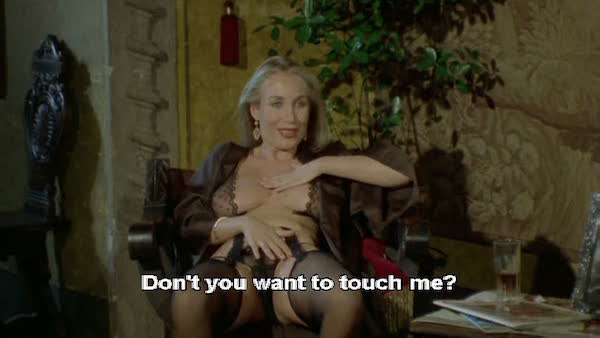 Malabimba is an ultra sleazy take on The Exorcist by Italian bizarre trash guru, Andrea Bianchi (Burial Ground and Strip Nude for Your Killer). The film is steeped in erotically charged energy and the castle setting gives it a very gothic atmosphere. The acting is uneven with Katell Laennec who plays "Bimba" (in her one and only acting role) staring blankly into the camera most of the time and Mariangela Giordano who plays "Sister Sofia" acting her nun habit off–literally. The two of them have a couple of very hot scenes together and both are incredibly sexy. The busty Patrizia Webley plays the slutty seductress "Nais" who is pretty devilish herself and by "devilish", I mean kind of a floozy. After the original filmmakers got done shooting, the producers decided to splice in some hardcore sex in a few scenes and it really doesn't add anything to the already ultra-sleazy movie. In fact, like in Thriller: A Cruel Picture, it kinda shocks you out of the scene for a second.

The Aguilar family in Satan's Baby Doll–asshole father Antonio, invalid uncle Ignazio and daughter Miria–live in a large Gothic castle along with servant Isidro and caretaker/soon-to-be-nun, Sol. The matriarch of the family, Maria, dies of an apparent heart attack and while the daughter, Miria, is visiting her, she sits up from her death bed and traumatizes Miria. The family doctor writes it off as a muscle spasm. But the superstitious servant doesn't believe it. He believes the mother's spirit has invaded her daughter. So he sets his sights on ridding the innocent daughter of the malicious spirit of her mother.  His suspicions are true and Maria begins to speak to her daughter in an otherworldly voice and take control of her body so that she can exact her revenge on everyone that stands in her way of what she wants. Miria being possessed sets in motion acts of betrayal, seduction, murder and lustful family secrets. 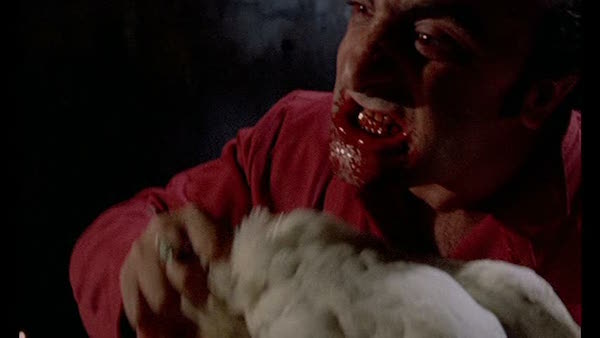 Satan's Baby Doll is not nearly as sleazy as Malabimba. This is partially because the Severin DVD is not the version with hardcore inserts (see a pattern here?) released in Italy. But it's also due to the whole focus being more on the gothic horror aspects. Mummies, a little violence and bloodshed makes it much more of a "serious" film that doesn't just go for the sexual shock value. It still has plenty of nudity and debauchery, it's just not the center of the movie. And who knows how the tone would have changed if the hardcore scenes were left in as with Malabimba? Like Katell Laennec who played the "Bimba" character before her, this was Jacqueline Dupré's only acting role in her career. Maybe the role is cursed or maybe they were both just cute, sexy women with wooden acting skills who were hired for their looks. The high point of both movies is Mariangela Giordano, who reprises her role as a sexy nun. She chews up every scenes she's in and exudes sexiness.

Both of these DVDs were released by Severin almost a decade ago and I'm hoping that some day soon they will get the Blu-ray treatment they so richly deserve. They look very good in standard-definition but the beautiful settings of both films would do well with a nice, clean high-definition transfer. It would also be nice to have more extras on these hypothetical Blu-rays. Both of the DVDs have interesting interviews and Malabimba has some deleted scenes, but let's do them up right with some 2-Disk Special Editions complete with slipcase and booklet by Stephen Thrower or Nathaniel Thompson or someone awesome like that. Let's do this Severin. If you can do it for Jess Franco (and thank you for that!), you can do it for Andrea and Mario Bianchi!
Posted by Greg Baty at 1:21 PM