Born in Rockford, Illinois in 1962, Ginger Lynn Allen (full name) went to California in 1982 to visit her ill grandfather. Following his death, she decided to stay but her new job as a record store manager just wasn't enough, so she answered an ad from a modeling agency. Because of her fresh-faced, "girl next door" looks, she was very quickly hired to do a layout for Penthouse and that would get attention from the booming adult film industry in 1983. In 1984 Ginger Lynn (she dropped the "Allen" for showbiz purposes but would later pick it back up) would make more than 30 adult films and be featured in many video compilations. 1985 would also be a huge year for her as she got her own video line from Vivid and starred in some classic XXX films like the original New Wave Hookers and Trashy Lady.

In Trashy Lady Ginger stars as Kitty, a prudish cigarette girl who works in a speakeasy in the "Roaring Twenties" where she is noticed by Dutch (Reems), the city's top mob boss. Dutch is looking for a new piece of ass after his chick leaves him but by all indications, Kitty is too much of a "good girl" for his tastes but fuck is she HOT. So Dutch hires his gangster rival Louie's (Savage) girlfriend Rita (Amber Lynn) to teach kitty how to be more "trashy" and by that he means he wants her to be a foul-mouthed whore. But Louie is incarcerated and gets bad information that his girl is "making time" with Dutch. Uh oh, will there be a bloodbath when Louie gets out or will there just be loads (pun fun!) of testicle-draining fucking? I'll bet you already know the answer to that, don't you? 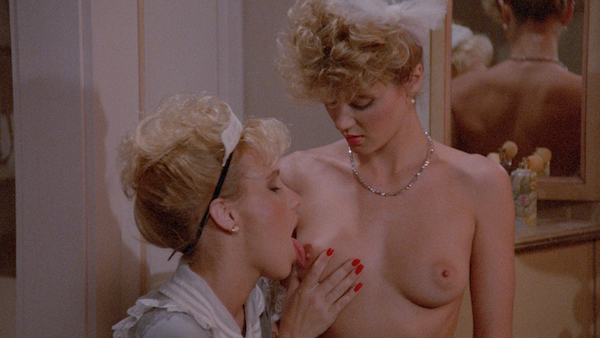 Trashy Lady was made during a time when they were making actual movies that just happen to have lots of real banging in them. It was the heyday of adult films and not only was there a huge QUANTITY of smut being churned out, but a large percentage of it was really QUALITY work that turned out to be classics, some even legendary. Technically the "Golden Age of Porn" was a 15 year span from around 1970 to the mid-80s but there was some great stuff on into the late-80s as well. Trashy Lady has Ginger Lynn in her most "girl next door" absolute sexy hotness and she plays it up with her big, gorgeous doe eyes and squeaky little voice. The lead male role is also played by my favorite male performer of all time, Harry Reems who plays the gangster part to a tee. The cast is rounded out by all-stars like the gorgeous Amber Lynn, another of my favorites Bunny Bleu, Herschel Savage, Cara Lott and a very young Tom Byron.

This stunning Blu-ray from Vinegar Syndrome was remastered from the original 35mm negative and looks and sounds fantastic. I'm always amazed at the care they put into making these dirty movies look so nice. Aside from the two very informative commentary tracks, you also get another whole feature film from director Steve Scott, a very peculiar "western" called Coming West starring a lesser known cast like Maria Arnold, George Peters and Sandy Carey. This second feature is in standard definition and doesn't look nearly as good as the main film, but it is definitely watchable if you are interested in more of Scott's work. Trashy Lady is right up there with my favorite Vinegar Syndrome adult output and one of my favorite Ginger Lynn movies I have ever seen. If you like that combination you should also check out the very good Too Naughty to Say No, out on DVD from Vinegar Syndrome.
Posted by Greg Baty at 12:11 PM