British filmmaker Pete Walker is primarily known for his string of horror movies he did all through the 1970s. The Flesh and Blood Show, House of Whipcord and Frightmare are just a few of Walker's well known films that have garnered quite a following. Like other horror filmmakers, he started his career in the adult movie industry to get an injection of cash and to pay the bills. He didn't make XXX pornography, mind you, he shot 8mm "glamour loops" in the '50s and '60s before pornographic feature films would become chic. These loops would lead to a few British "sexploitation" flicks that the English call "Slap and Tickle", starting with a 40-minute short entitled For Men Only! and then the feature-length School for Sex. He would go on to make a few more like The Dirtiest Girl I Ever Met and Four Dimensions of Greta but let's take a look at the first couple.

Later retitled Hot Girls for Men Only, For Men Only! is a quick tease with lots of skin and innuendo but no nudity. It follows an engaged ladies man named Freddie who works for "Women's Vogue" magazine and decides to look for a new position elsewhere after his fiancee gets jealous of how the females at his job flirt with him. So he goes for an interview at the "Religious Man's Guide" where everyone is pure as the driven snow, that is until he meets the owner Miles. Miles runs a few periodicals like the "Religious Man's Guide" as a front for his more fruitful adult magazines like "For Men Only!". So the two successful, good looking guys hang around the mansion getting pampered by a bevy of scantily clad hotties until Freddie's betrothed comes a knocking. Yes, this is good, clean, naughty fun from the late '60s. No sex or nudity, but there is lots of cleavage of both the boob and butt variety. These ladies really knew how to wear a bikini and shake their groove thang! 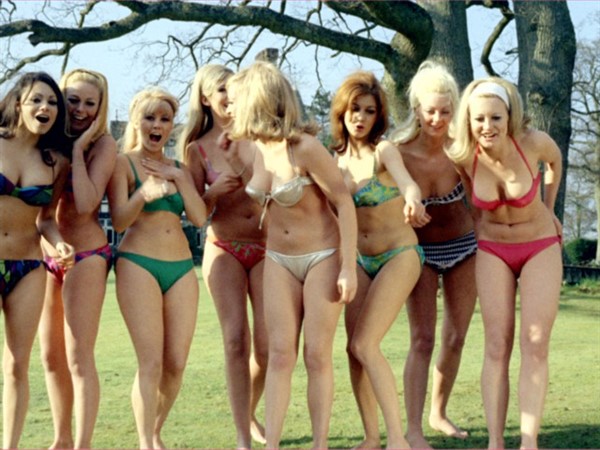 Walker's sex comedy School for Sex burst onto the screen and out of its bras. Giles is a swindler who is found guilty of fraud but gets a suspended sentence after his lawyer explains how he has been down on his luck with women and money lately. So he walks straight out of court and into a live nudie show with his pal with whom he plans to open a school to teach girls how to bilk rich men out of money. So who will be his professors? Why a bunch of other ne'er-do-wells, of course. And who will be the students? Cute little parolee ex-convicts, DUH! With all of the hubbub going on a Giles' estate, the local bobby (that's a cop to you bloody yanks) starts to investigate. What he finds is mostly naked criminals who are out on probation, role playing in order to graduate into a bigger life of crime. "Cheeky" doesn't even begin to describe the goofy, playfully sexy yet innocent goings-on in School for Sex. It has the same frisky, flirtatious tone as For Men Only! but lots more nudity and ribald comedy.

Up to this point, Pete Walker's sexploitation films haven't been released on home video in the U.S. but have gotten some attention in England on the Salvation Films label. It just so happens that Salvation and Jezebel (both of which are sister companies with Redemption Films) along with Kino Lorber have decided to give us a huge treat, releasing both For Men Only! and School for Sex on Blu-ray with loads of extra features including over an hour's worth of Walker's 8mm loops! These are silent, black and white shorts featuring women doing everyday things that would consist of them getting undressed for the camera. So naughty! My favorite extra though is the racier (aka more nude) scenes from School for Sex that were shot for places like Japan who had more lenient censorship laws in the 1960s. It would have been cool to have those scenes edited into a separate version of the movie, but that's a small gripe. This set is nicely rounded out with a 9 minute interview with Pete Walker who talks about his beginnings in film making and why he decided to shoot these saucy skin flicks.
Posted by Greg Baty at 1:52 PM