Why would a respectable actor with over 200 roles who started in the 1930s suddenly decide to write, direct and star in a crazy, off-the-wall horror movie in the 1970s? That's exactly what veteran actor and director Marc Lawrence did when he made the bizarre horror flick Pigs aka Daddy's Deadly Darling. One can assume that maybe it was to give his daughter Toni Lawrence her first shot in the acting biz as she landed the lead and he played along side of her in the co-star role. She went on to do a few TV and small movie roles in the next 15 years–mostly notable for us, Thom Eberhart's 1983 Sole Survivor. He worked steadily up through the '90s and even a little into the new millennium. But really, Pigs? I'm still perplexed by this career and artistic detour, although he did star in the bat-shit crazy Night Train to Terror, so maybe this isn't too out of character.

Lynn is a young lady drifting into a small town in need of employment, so she stops into the local cafe which has a "Help Wanted" sign hanging in the window. The old, grizzled owner Zambrini (that's a name?) is at first skeptical but then allows her the job and room and board that comes with it. But what's that terrible squealing? The snorting? The growling? Fuck, this dude has a pen full of hogs that are rumored to be man eaters and the neighbors are none too happy about the whole thing. But Lynn has a little problem herself; she may have (most certainly did) stabbed a man to death who was to rape her and Zambrini may have (he did too) fed the body to his piggies. So of course with the agitated neighbors and all, the sheriff is called in and starts to get suspicious of everything; the new chick, the overzealous hogs, Zambrini's obviously nervous lying. These two maniacs obviously have secrets but what are they and the real question is does the cafe serve bacon? 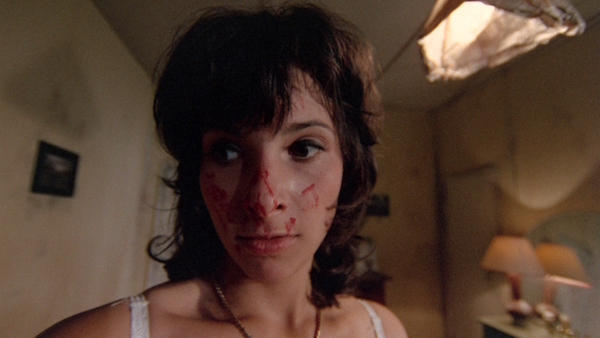 I went into this thinking that it was going to be a "killer animals", "amuck pigs"-type movie but it's so much more than that. The future sausage patties never even get out of the pen and there isn't much in the way of attacks on screen. Pigs is more of a very dark, grimy psychological mind-fuck with the pigs working as a catalyst for the fear and surreal, nightmarish quality of the film. The setting is a filthy farmhouse and it works closely with the unsettling camerawork of Glenn Roland (who shot a couple of the Ilsa movies) to create a feeling of macabre panic and claustrophobia. There is a seemingly inescapable sound of rooting, feeding hogs throughout the movie that makes you edgy. There is also an a cappella nursery rhyme that gets under your skin and chills you to the bone. Pigs is a legitimately frightening movie that just so happens to use pork products as a horrific plot device and it works very well.

Vinegar Syndrome warns the viewer that some of the vault elements were destroyed, therefore there may be some uneven picture quality but with this movie's home video past, you can forgive a little inconsistency. There are so many different cuts and edits of Lawrence's original film out there that it's as schizophrenic as Lynn's character. Vinegar Syndrome has actually done a superb job of making this a serious, much more coherent movie than past releases. In the disk extras they have provided wildly inappropriate and head-scratching alternate openings and endings that actually appeared on VHS and DVD at some point. One of them gives away Lynn's past before we even get started but my favorite begins with Lynn grunting like a pig and eating off of the floor before going all Linda Blair, stabbing her woman-parts with a cross and screaming "FUCK ME!" while a priest tries to perform an exorcism. WTF? All I know is that the original director's cut of this movie is all kinds of weird, grimy and scary, thankfully this Blu-ray captures that.
Posted by Greg Baty at 8:31 AM