Before becoming an underground shock horror icon, Jörg Buttgereit made short films spanning many genres like monsters, superheroes and even the punk music scene. His art was spurred on by political and social unrest in Germany during the late 1970s and on through the '80s concluding with the fall of the Berlin Wall. With expressive and tumultuous art rising up in protest, Buttgereit's short films –and later his features that we know so well – made an indelible mark on the film-scape of the time and in perpetuity. NEKRomantik (1987), Der Todesking (1990), NEKRomantik 2 (1991) and Schramm (1993) have all become notorious (and until recently, underground) films that pushed boundaries and tested gag reflexes. Now they are being released in a gorgeous Blu-ray box set from Cult Epics and it's time to revisit them all along with a ton of extra features.

The original NEKRomantik covers a few genres; shock, gore, art-house and erotica, all with a sense of style and talent that rarely shows through in low-budget, underground cinema, especially from a first time feature film director. Buttgereit had a multitude of short films (like "Hot Love", which is a special feature in this set) under his belt when he and writing collaborator Franz Rodenkirchen decided on this idea of combining two of the most primal forces of human nature; lust and death. The two were living in a country where these kinds of movies were being banned and heavily censored but that didn't stop them from seeing their vision come to fruition. NEKRomantik's reputation of being "shocking" and "disturbing" is completely warranted but it was made with poetic social and spiritual commentary that sets it apart from most of its ilk. 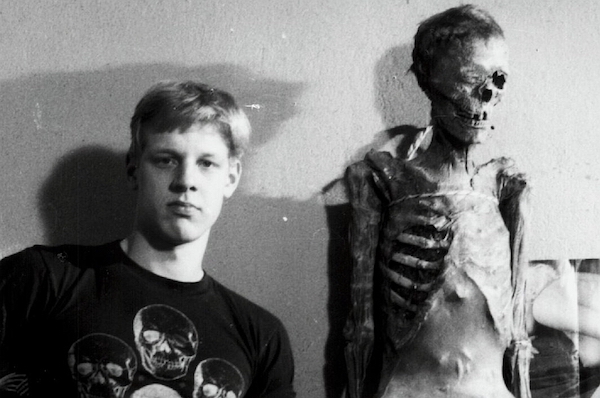 In between the "NEKRo" films, Buttgereit made one of the most depressing and dark art house movies I have ever seen; Der Todesking aka The Death King. The film is a loosely connected anthology of sorts held together only by a chain letter sent to each person, presented on each day of the week and all of the vignettes contain the same subject matter; death and suicide. Each of the chapters are broken up by the extremely graphic eventual decomposition of a human body. They are set up by what, at first, seem like mundane events but the atmosphere set forth by Buttgereit is something that you have to experience yourself. You will feel the hopelessness, anguish, despondency, sorrow and finally death of these people who just the day before were leading a life much like your own. Unlike the NEKRomantik movies, Der Todesking isn't overtly gory overall but the subject matter, atmosphere and underground art house aesthetics take center stage to unsettle you.

NEKRomantik 2: The Return of the Living Dead is ultimately a love story: a VERY fucked up love story, but a love story nonetheless. Buttgereit somehow makes the obviously crude and shocking themes of necrophilia and gory splatter into a charming story of a woman who has an extremely warped, but no less true, need for love, passion and affection. Like the original, the sequel uses interesting and symbolic imagery to create a mood. Buttgereit's uncompromising vision takes the second film to new heights of depravity and the technical aspects of The Return of the Living Dead have improved greatly on its predecessor. There are a few slow moments that reminded me very much of a typical romantic movie, like Monika watching the waves roll in at the beach, that slow the pacing considerably. A deplorable and overly drawn out scene of seal animal cruelty also mars an otherwise classic sequel. To round out this quadrilogy of horrific art-house madness we have what I consider to be the best of them all; Schramm. Maybe it's my love of serial killer and slasher flicks, but Buttgereit's grim and surreal film really feels like he hit his stride and learned a lot from making the other three movies. Schramm is the story of a serial killer from his point of view and you experience what it's like as a madman devolves into psychotic episodes. He loses his grip on reality while he murders, rapes and shoots Polaroids of his carnage. He hallucinates toothy vaginas, his leg being chopped off and pulling his skull back to reveal his pulsating brain. This is Buttgereit's most straight-up horror movie and he pours on the grotesque special effects. You really feel a sense of hopelessness from the killer's malevolent and broken mind. He is almost sympathetic but you can't really feel anything but sick as you watch him violate the humanity of his victims.

Until a couple of years ago, Jörg Buttgereit's films were nearly impossible to find unless you wanted to pay an arm and a leg for the Barrel Entertainment DVD releases. Luckily Nico from Cult Epics acquired the Blu-ray rights to these four films as well as loads of extras including a plethora of his short films. The individual Blu-ray releases of these movies look and sound great considering the film's themselves and the budgets. If you have already purchased these Blu-rays separately and wonder why you should double-dip into this fantastic box set, the answer is simple; exclusive soundtracks for all four films and a 40 page booklet with exclusive photos. And if you have never tried the Wonderful World of Buttgereit, what the hell are you doing still reading this? Only a few months into 2016 and I am ready to put this collection in my Top Releases of the Year already.
Posted by Greg Baty at 6:40 PM