Herschell Gordon Lewis is best known for his gory horror exploitation fodder from the '60s and '70s like Blood Feast and The Wizard of Gore. Super fans of Lewis know he's a kind of Renaissance man when it comes to films of the grimy grindhouse era. But horror isn't his only forte. Far from it. He's filmed anything from biker flicks, children's movies, comedies, and yes, even sex movies. If you've seen Herschell Gordon Lewis's films in any genre, you can pretty much cut and paste some softcore sex scenes into them, and you've got a good idea what "The Lost Films of Herschell Gordon Lewis" boxed set is all about. The shoddy productions values, cheesy dialogue, and questionable acting are intact, just add tits and ass and lots of moaning. Those of you who are mid-chubby, keep on reading. 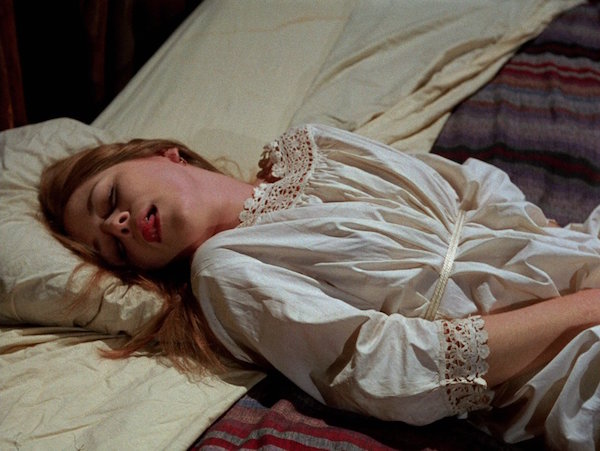 Linda and Abilene is by far the weakest of the set. Todd and Abilene's parents have just died. After burying them, our brother and sister go back to the farmhouse and do farm work. Big brother sees his sister cleaning herself in the creek buck naked, and soon, a romantic, incest-driven relationship with sister and brother blossoms. They masturbate to each other, and eventually, work up to having sex. Then they farm some more. Weird situation, right? It gets weirder. Lesbianism, rape, and a cowboy shootout ensues. Sounds exciting, but it about bored me to tears. This plays out more like a crappy drama. The sex is rather tame, and again, this is strictly softcore. I say pass on this one, though Abilene sure is mighty pretty.

Vinegar Syndrome has outdone themselves with the 2K restoration of these three films. You can tell this new movie company means serious fucking business in the quality department. I've never seen such shiny pubic hair in my life! You can argue the entertainment value of the movies themselves, but if you know Herschell Gordon Lewis, or if you're into the skin flicks of the late '60s and '70s, this should definitely be right up your alley. This release also offers trailers for the featured films, and the liner notes are very detailed and thought-provoking about Herschell Gordon Lewis's career. But the star of the show here is the amazing job done on the restoration of these ridiculously obscure movies.
Posted by Greg Baty at 4:32 PM