Paul and Marianne are roommates and lovers but they don't get along very well. One night after a party the couple bring home her sister Beryl (pronounced "barrel") just before Marianne goes out of town. So that leaves the womanizing Paul and Beryl to get into trouble, and they do. She begins stripping for a nude photographer and he starts fucking the photographer's girlfriend Eva (Lindberg). While the four of them are partying one evening, Beryl accidentally gets locked out of the apartment and picked up by the sinister Mr. X who takes her to his house and starts assaulting her. During her escape, she grabs a mink coat to cover herself on the way out, and it turns out to be filled with drugs. Marianne returns home to find that Paul and Beryl have gotten into trouble and in the exciting and completely oddball ending, Paul, Beryl, Marianne and Eva end up in a showdown with the bad guys.

This movie's plot is a mess. My synopsis is cleaned up and written to make sense which the plot to Wide Open barely does. The story is completely convoluted and random and the Benny Hill-style ending comes completely out of nowhere. I think it is supposed to be sort of a dramedy but fails considerably. The acting is more than adequate but they didn't have much to go on. In the ways that the film fails as a coherent story, it succeeds in being a pretty decent softcore porn flick. All three lead actresses are nude as much as they are clothed and that's not a bad thing with these particular ladies. Lindberg is a given; she is a goddess pure and simple and really struts her gorgeous assets here. The pleasant surprises are Solveig Andersson (Marianne) and Gunilla Larsson (Beryl), both sexy ladies in completely different ways. Andersson, much like Lindberg, is a big-breasted brunette beauty. Larsson though, it took me about half of the movie to decide whether she had "character" or she was just weird looking. She has a unique, cute face and small, very sincere boobs. She grew on me. 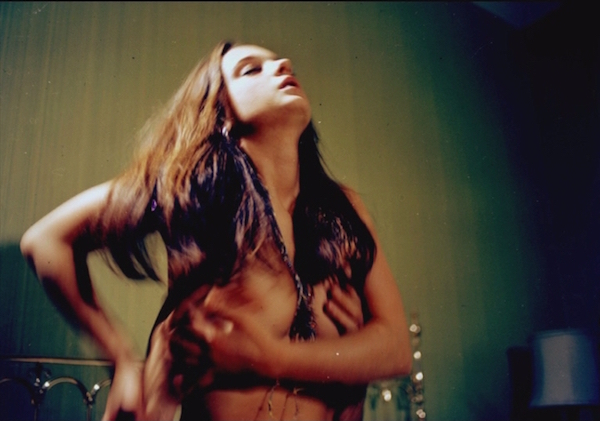 There was a definite theme throughout the movie that hammered home the point that all men are assholes. Paul was a complete creep who treated all women like shit and for some reason, they couldn't resist his disgusting sexual advances even when they knew he was fucking other women. The motherfucker won't even take his clothes off to bang them; they get naked, he climbs on top of them, unzips his zipper and sticks it in... romantic! It isn't until the sappy end when he finds "true love" that he actually gives her the courtesy of not giving her denim burn on her coochie. In one scene the photographer has Eva vacuuming in the nude and then he literally kicks her in the ass and she stumbles to the floor. These dudes need a good punch to the cock. In the interview with director Gustav Wiklund in the DVD extras, he explains that this was on purpose but doesn't really go into why. Lindberg is also in the interview feature and she still looks good, especially for her age and she had awesome cleavage.

The DVD from Impulse Pictures is pretty standard as far as extras. The interview described above, a Lindberg photo gallery and trailers but my favorite thing is the reversible nude cover... HUBBA HUBBA! Transfer wise, the quality is on par with a decent VHS picture. There is some obvious yet small film debris throughout and both sides of the screen glow pretty brightly during the darker scenes. The colors are also muted and drab. That's not to say it isn't watchable because it definitely is, just don't expect anything stunning. It is 1.66:1 widescreen which means you will have tiny black lines on each side of your 16x9 TV. The Dolby 2.0 soundtrack is perfectly sufficient with no apparent problems. This isn't Goddess Lindberg's best movie as she is relegated down to a supporting role (due to budget restraints according to Wiklund) but they make the most of her and keep her lovely globes mostly uncovered.