Extras: The 2011 documentary on Jose Larraz, ON VAMPYRES AND OTHER SYMPTOMS, a film by Celia Novis / FROM BARCELONA TO TUNBRIDGE WELLS, a 1999 TV documentary on Larraz, part of the EUROTIKA! series / New interviews with stars Angela Pleasence and Lorna Heilbron and editor Brian Medley-Aston / Newly commissioned cover art by Gilles Vranckx

More than likely if you've ever heard of Spanish filmmaker José Ramón Larraz, it's because you know of his erotic vampire classic Vampyres starring the lovelies Anulka Dziubinska (Playboy's Miss May 1973) and Marianne Morris (who also did a nude pictorial for the British men's magazine Mayfair in October, 1976). Vampyres is a dreamy, atmospheric gothic tale filmed on the set that Hammer Films made famous, Oakley Court. Larraz would become known for his moody, soft- focused look of his films, including the super sleazy Satanic horror of Black Candles (aka Los ritos sexuales del diablo) from 1982. But a few years before that in 1974, the same year as Vampyres, Larraz went the opposite way and made a slow burning, suspenseful, darkly psychological and yes, atmospheric take on Roman Polanski's Repulsion called Symptoms.

The movie begins with very moody opening credits over still pictures. We then meet Ann who has come to stay with her new friend Helen in a large house, deep in the woods in the English countryside. Helen is a strange woman who seems full of secrets and sapphic love for Ann. The house and the surrounding forest seem to be alive with hidden mysteries. There is a groundskeeper, Brady, who also skulks around like a Scooby-Doo villain, adding to the unease. Unbeknownst to Ann, Helen has disturbing hallucinations of something or someONE in the attic. She also has dark lesbian fantasies while having these visions. Brady seems to know more than he is telling, but does he know all of Helen's secrets? Is he somehow involved? Ann begins to feel strange about her host and the weirdness of her surroundings but will she uncover the answers before she is added to the shroud of mystery? 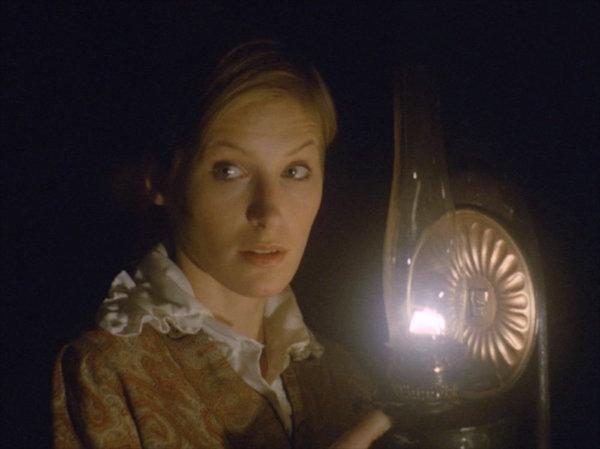 Symptoms is a film that will stick with you for days after watching it. There is dread from the very beginning. Larraz uses quick visuals like faces in windows and flashes of things that you don't know if you actually saw them or if it was a trick of the light. The first hour is stomach churning tension and chilling atmosphere that will drag you white-knuckled to the last thirty minutes that is filled with some surprisingly vicious violence and bloodshed. Donald's daughter Angela Pleasance plays the mentally unstable "Helen" and steals the show with her intense stare and is complemented perfectly by absolutely gorgeous Lorna Heilbron as "Ann". There is a haunting music score but Larraz uses the natural sounds of the house and surroundings to put the viewer on edge. Symptoms is not what you expect from José Ramón Larraz if all you know him from is his more shocking and popular films. The suspense builds slowly but the thrills are right around the corner.

Even after being accepted and highly praised at Cannes in 1974, Symptoms fell into obscurity and landed on the United Kingdom's Top 75 "Lost Films". And even though it was played on British television in 1983, the source material was thought to be gone forever. Luckily, with the help of the British Film Institute (BFI), Mondo Macabro has released a gorgeous new Blu-ray transferred from the original film negative! Wherever the materials were found, they must have been kept in pretty good condition because this full 1080p picture and Dolby Digital audio look and sound incredible. Larraz shoots with a very soft lens, so you aren't going to get the sharp detail that you would otherwise, but that effect is very intentional. I am pleasantly surprised how much I liked Symptoms, because like some of you, I am not always a fan of "slow burn" movies. But José Ramón Larraz is now 3 for 3 with me and I look forward to more of his films coming to light. Yes, that is a hint Mondo Macabro!
Posted by Greg Baty at 12:33 PM