Storefront Theater Collection Vol.1: All Night at the PO-NO 
Vinegar Syndrome presents its new ‘Storefront Theatre Collection’, which celebrates both the strange and often homegrown productions that played in ‘mini-theatres’ of the 70s. This special-edition 3-disc set is uniquely packaged in 100% recycled card stock and features a heavy-duty slipcase.

Throughout the early to mid 1970s, the most common way to see underground feature films was to visit a ‘storefront theatre.’ Sometimes referred to as ‘mini-theatres’ or ‘shoebox theatres,’ these small venues were often converted retail stores armed with nothing more than a couple projectors and nailed down folding chairs. And, unlike larger houses like the Pussycat chain, the films screened in these small and cozy spaces were low-budget 16mm efforts, affectionately known as one-day-wonders.

All films have been scanned in 2k from rare original theatrical prints to re-create the experience of stumbling into the PO-NO late one evening and not leaving until dawn the next day. 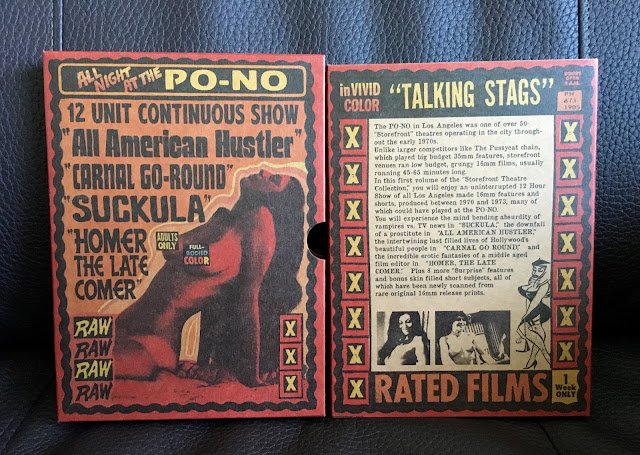 This collection from Vinegar Syndrome comes in a very sturdy cardboard packaging. The images on the outside and inside covers are the same. The front is on the left, the back on the right. 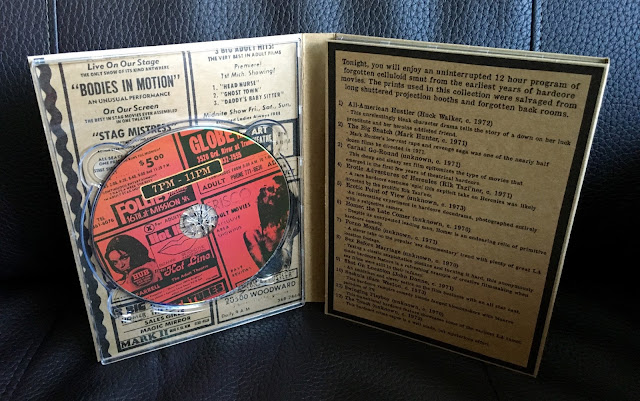 The first fold of the trip-fold case contains the first 4 hour DVD of the 12 hour marathon of smut and the chapters/films contained in the set. 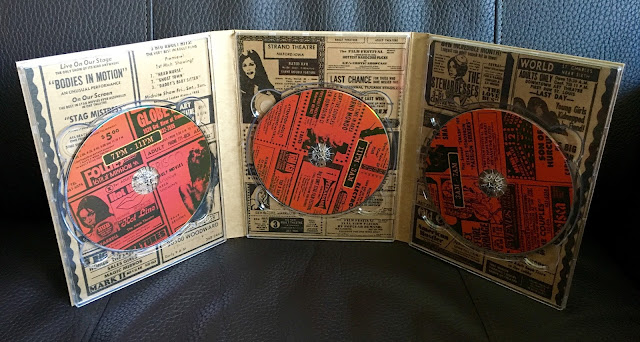 Opening the set up fully reveals the gorgeous tri-fold containing all three DVDs, 12 full hours of glorious adult content and reprints of adverts for the movies.


As you can see, the packaging is beautiful and sturdy as fuck. If you are a fan of vintage adult films, you know what kind of movies contained here and know what to expect; dirty, grimy, weird, sleazy and lots of fun! What you may not know is how obscure these movies are. Yes, you will recognize some of the stars, but the majority are unknown to most people. Vinegar Syndrome also went the extra step of putting you right in the theater by scanning the beat up prints of these skeevy shows instead of polishing up the camera negatives like they usually do and the effect works. You get the feel of what it was like hunkered down in your filthy, broken theater seat with your feet stuck to the floor. Is it cum from the hundreds of dudes before you or just a spilled soda? I think you know the answer.

PURCHASE FROM GRINDHOUSE VIDEO
Posted by Greg Baty at 11:59 AM