Paul Naschy is THE MAN WITH THE SEVERED HEAD! 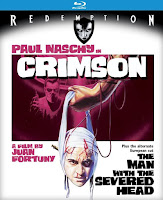 Paul Naschy has been called "the Spanish Lon Chaney" because of his long career playing some of the most beloved horror movie icons like Count Dracula, Mr. Hyde and a mummy. His career began in 1961 as an extra in Nicholas Ray's King of Kings and would carry on until his death at the age of 75 in 2009. His most popular role was as the wolfman, Waldemar Daninsky. That character would appear in a series of eleven films and would make Naschy a horror legend. Sandwiched in between two of those films, Dr. Jekyll vs. The Werewolf and Curse of the Devil, Naschy would star as a criminal whose brain transplant doesn't quite go as planned and mayhem ensues.

Naschy stars as thief and gangster boss Jack Surnett who is shot in the head after a heist goes awry. He is taken to the home of a scientist/experimental brain surgeon, who has lost the use of his hands, by his gang in hopes of saving Surnett's life. With the help of his novice surgeon wife, the doctor reluctantly agrees to help after the gang kidnaps his daughter. So all they need to do is find the fresh brain of a newly dead person and pop it in his noggin, no problems, right? Wrong. They get the idea to kill their criminal rival, helpfully named "The Sadist" and graft his brain bits onto Surnett's. But after the surgery, he begins to have thoughts that aren't like him and sexual urges beyond his control. Oh no! How could we have possibly seen that coming?! 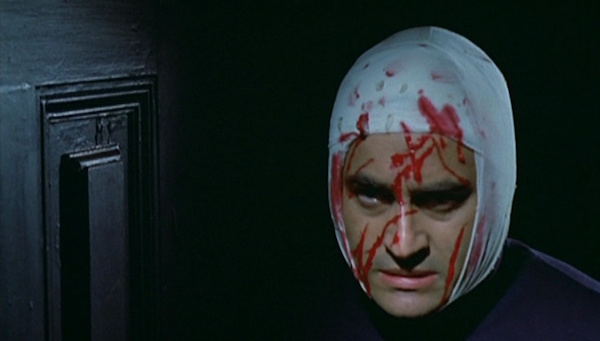 The original title of this flick was Las ratas no duermen de noche or "Rats do not sleep at night" which I think is a much better name than Crimson or The Man With the Severed Head. I don't see where "Crimson" came from at all and there is no damn "man with a severed head". The movie plays out like a crime thriller from the late sixties or early seventies with a splash of sci-fi horror mixed in and for that matter, you only get a splash of Naschy as well. His role is the center-point of the plot but he is mostly to be the catalyst for what happens with the rest of the cast. The pacing is pretty slow and boring with lots of filler with dance numbers and tedious sex scenes, some of which looked to be edited in after production. The few scenes that Naschy is in toward the end are pretty good, otherwise, meh.

Before this new blu-ray from Redemption, the other home video releases were void of most of the blood (what little there is), nudity and sex and only has those scenes as incomplete extras on the DVD. This newly remastered disk is from the original 35mm elements and looks pretty good, especially considering the budget of the movie. Some of the darker scenes are a bit light, but overall the picture quality is an upgrade from earlier releases. You have the option of watching the 89 or 98 minute international version of Crimson, the latter including those oh-so-needed sex scenes. If you are a huge Paul Naschy fan or a completist and just have to have this movie in your collection, this is the version to get since it is the most complete and looks the best. But for everyone else, stick with Naschy's werewolf flicks.
Posted by Greg Baty at 12:01 PM